A Glimpse of A Field

“As for man, his days are like grass: as a flower of the field, so he flourishes. When the wind has passed over it, it is no more. And its place acknowledges it no longer.” Psalm 103: 15-16

We move through the world eager to make a mark. In this age of celebrities and influencers, the undistinguished life is often regarded as an aberration, a lack of social capital that reflects poorly on the individual. Indeed, even as a species, we have come to a point that our collective actions have made such a profound and permanent mark on the geological record it has ushered a new epoch.

And yet, in the past, our art and poetry have regarded the modern-day harping for attention, fame, or longevity, as folly. Buildings crumble, kingdoms are brought to ruin, man is impermanent. In a time when our online traces outlive our physical selves, this could very well be a strange concept. But isn’t all this imperishability smoke and mirrors? Are we not, at the root of our being, still the same: mutable, vulnerable, and weak?

In A Glimpse of A Field, Nicole Tee presents a seemingly panoramic view of a field of monochromatic whiteness. Its horizontality suggests a fragment of infinity, a snapshot of an endlessness beyond the frame. The exhibit marks a return to Tee’s practice of and engagement with the manipulation of textile for expressive and poetic ends sans paint or pigment. It is a continuation of prior work anchored around repetitive movements: the unraveling, sewing, and weaving of thread. Such tedious processes often engender a meditative state alongside a communing with the self. It is no wonder then that Tee regards these works as portraits, as being reflective of an internal subjective condition. Thus, unthreaded canvas is that of the self unraveled. A patch that is sewn back becomes an attempt to keep everything together.

Meanwhile in this show, knots of white, akin to buds of flowers in a meadow, are scattered throughout as if on the brink of being blown or plucked away. Having woven the cloth with a makeshift loom, the weave is imperfect and loose at parts. It imparts a roughness and vulnerability tied to the very fabric of its existence– a metaphor for the self equally applicable to the collective. For do we not flutter and hold on by the most tenuous of threads? There is beauty in this fragility, and if one were to look very closely, a kind of grace. 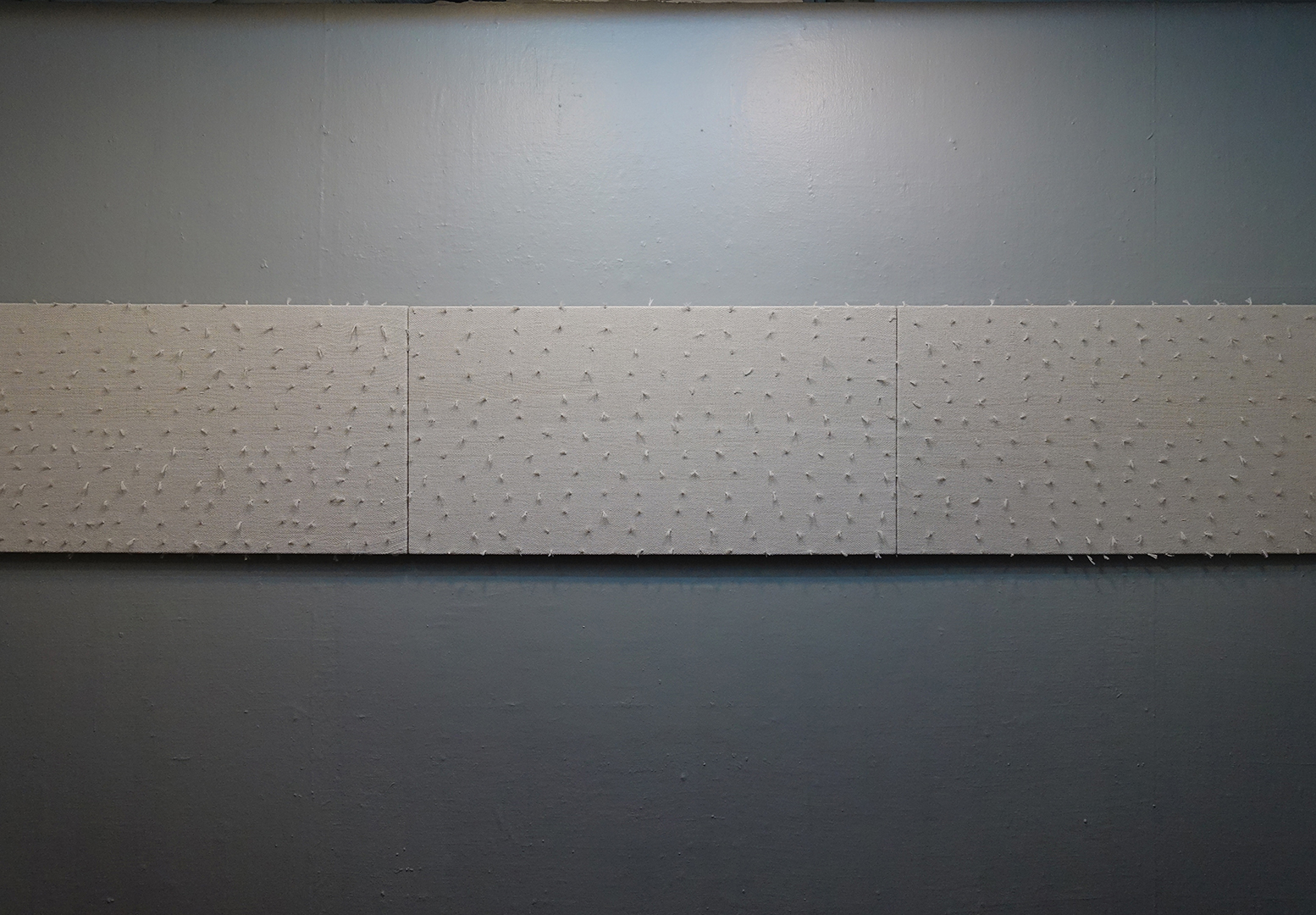 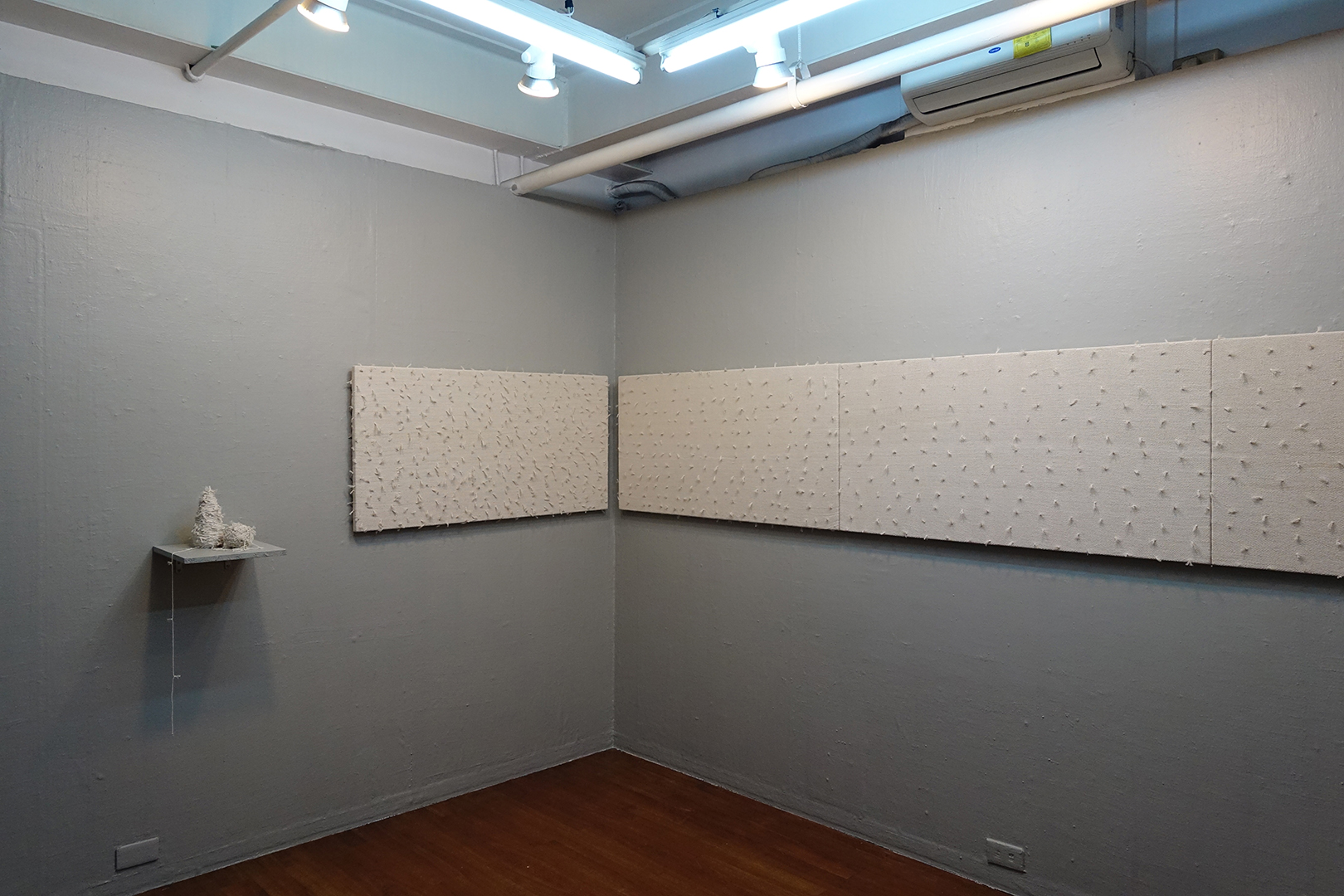 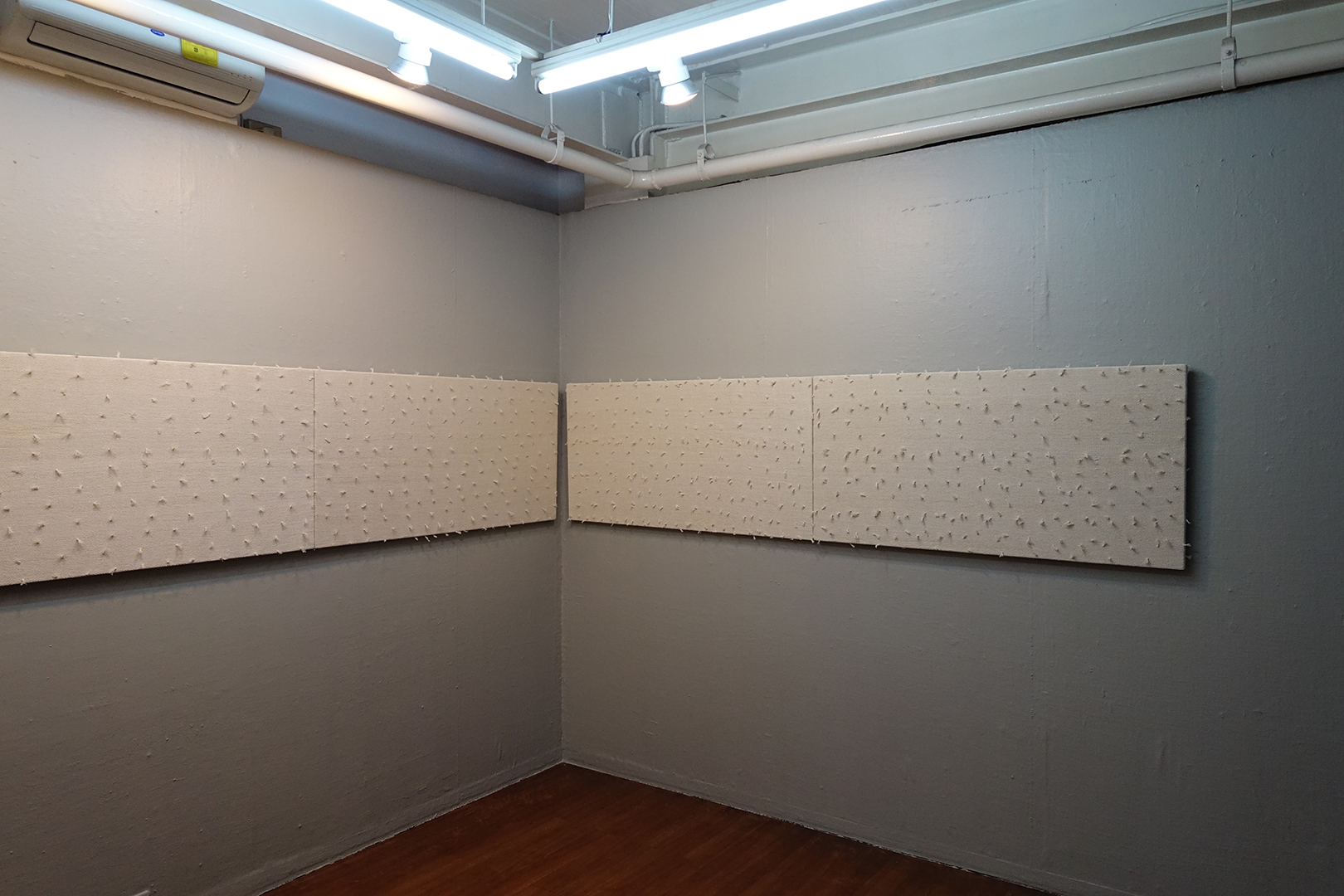 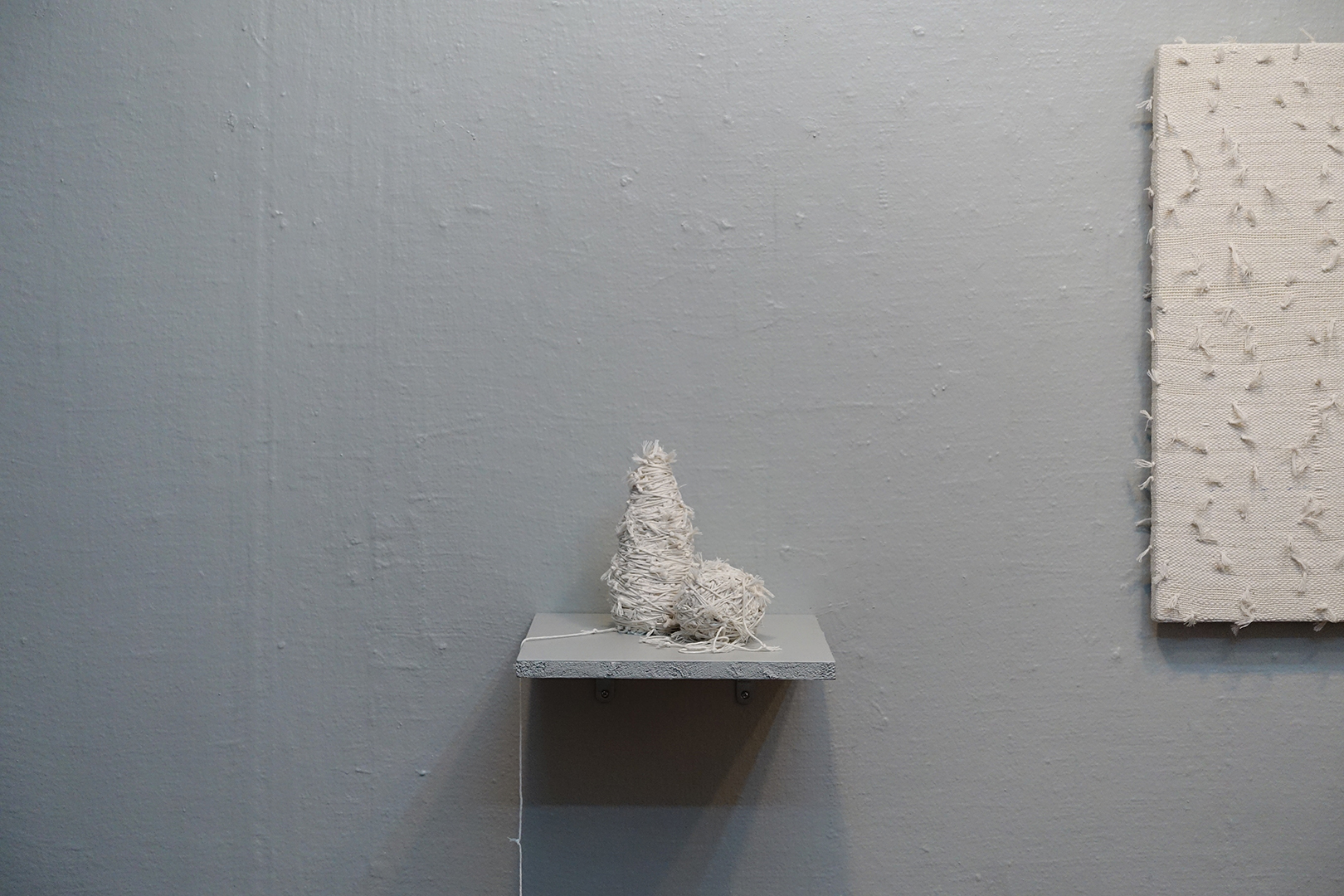 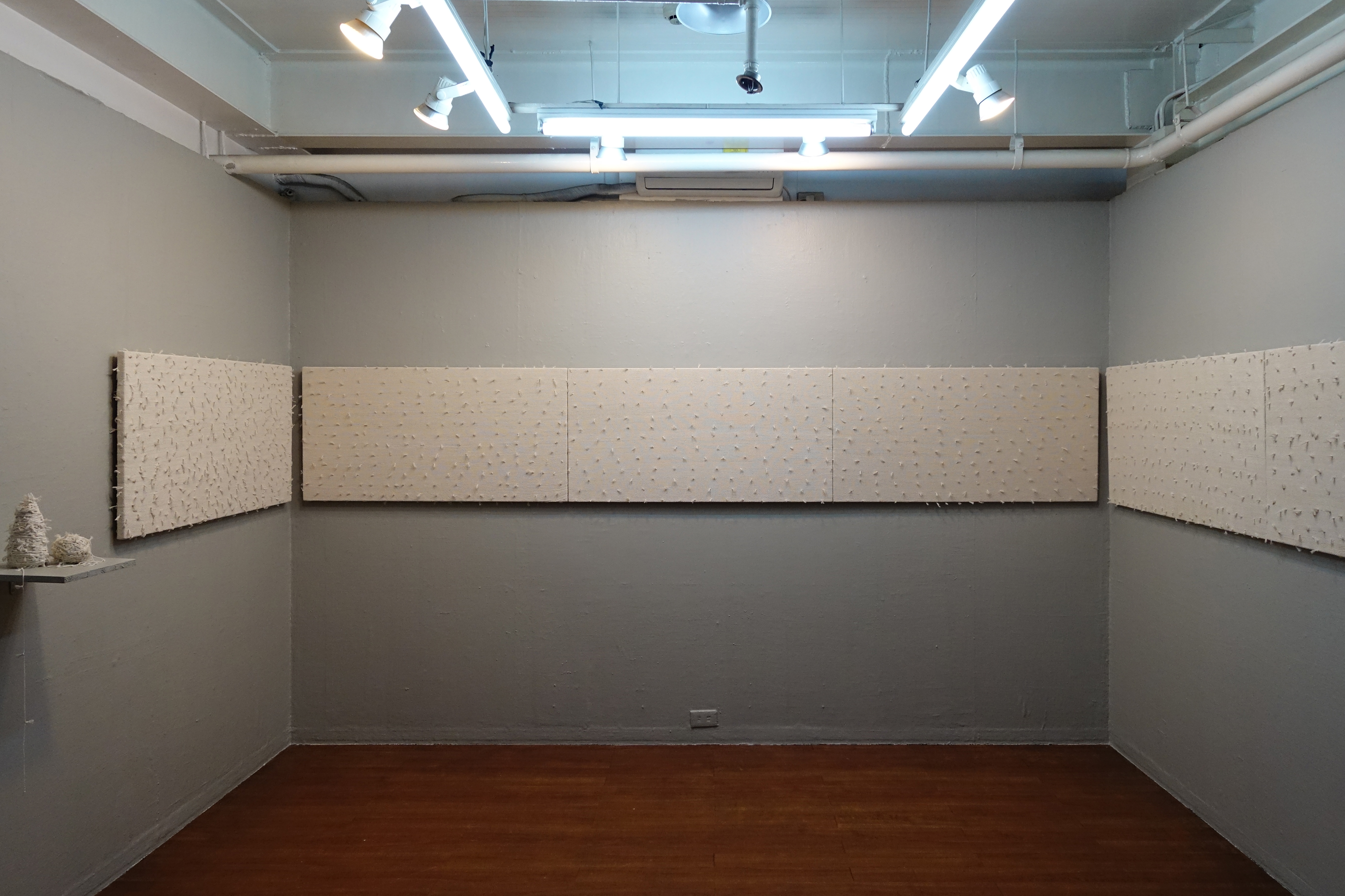