CATALOG, or a song of making

A hand moving slowly like crystal. One peers inside, the distal, the middle, the proximal, and sees the unfolding of a book. From afar rings the flapping of a bird’s wings, imagined as unmarred by weight. Then, imagined, a wound that one may tend to with the help of a bandage, but then, an unmarked strain that lies so close to your grip. Blessed are we with the appendages made for manipulation. No, blessed are we with bones bearing our desire to hold, harbinger of our fingers’ fold, announcing, give to me!—In small bones, holding a mountain, Suarez summons recovery: in repetition, unburdening is a practice in the palm and phalanges, as if learning over and over how not to grasp.

But then again, everything comes from elsewhere. In the age of mass production, human inattention causes objects to be like pollen. For example, see that family of teapots perched on the table at the door. A child walks past it. I could swear that I could have found one of them once on the stove inside a Japanese house. Then, at sea. Then, just now. The joy in meeting is that there is a second hand, finding. That opportune feeling: the solitude of one, the surprise of another, together. Not taken away. A mirror once in damp storage now greets a curious infant in sunlight. In my palm, I turn, and a rusting music box finally achieves its lasting note. I uproot the flower from the teapot’s side. I may not know if I am entering in search of. A pile of toys falls over to the floor. I have never been to Japan. From far away, the horizon asks NOW WHERE. A nondescript container van pulls up in front of the store. Here I am, bearing pollen. Gently blow. Everything will arrive elsewhere.

The first step in the transformation of towering rock into cowering fragments is thus: the temperament of the earth as rite of passage. Imagine yourself weathered & cracking open. The quick fissures, the hissing pain, but change is an act of sorting. Like so: colloid, clay, silt, there is fine silt, medium silt, coarse silt, then sand, fine, medium, coarse, then gravel, the pebbles fine, medium, coarse, then cobble, then, boulder, then boulder. You think you can no longer be smooth. But find a plant making its way through the gaping mouth of a broken rock. And come out breathing. Outside, there are tender bodies needling through the crevices of what once was stone. The National Geographic claims there is no rock on the planet hard enough to resist the forces of erosion. The second step in the transformation of the cowering fragment into towering rock is thus: the passage of the earth as rite of temperament. Minerals, animal remains, soil, sediment—open-handedly, there is still time to collect.

Sequence of pulp as diver

“Paper is a mat of cellulose fibers that have been beaten in the presence of water, collected on a screen, and dried. The manufacture of paper requires only cellulose, which can be extracted from various types of plants or textile waste, and fresh water for processing the fibers, as well as a screen on which to collect them. In principle paper can be made virtually anywhere, and the relative simplicity of the technique allowed cultures and individuals wide variation in the actual materials and specific processes used to make paper, depending on what was locally available and what was known. That said, making good paper is an art.”[1]

Two accordion books, one shogi board, one art print, four tomobako boxes, one tsuitate, three reclaimed wood frames, one mounting board, one sheet of book fabric, one soft bristle angled brush, six limestones, six unidentified stones, one bamboo stick, one lemongrass stalk, a mould and deckle, two yards of cotton cloth, one basin, one strainer, one sponge, five ice cream tubs, three boxes filled with paper offcuts, an uncountable amount of water, one yarn cake, one spool of thread, one book binder needle, one bone creaser, one sewing frame, seven books, one panel of pine wood, two wooden panels, three pieces of plywood of differing thickness, two eye hooks, an unknown number of plywood offcuts, five sheets of sandpaper, one set of canned epoxy, one bottle of wood glue, thirteen glue sticks, one pair of scissors, one pencil, one corner rounder cutter, one paper cutter, one ruler, one cutting mat, one cutter, one roll of masking tape, sheets of wax paper, and finally, one paper weight.

written by Michelle Esquivias for small bones, holding a mountain —

Esquivias (b.1993) is a writer, lawyer, and graduate of the University of the Philippines Diliman. Before the pandemic, she enjoyed scouring through ukay-ukay stores for toys, toy cameras, and other knickknacks. 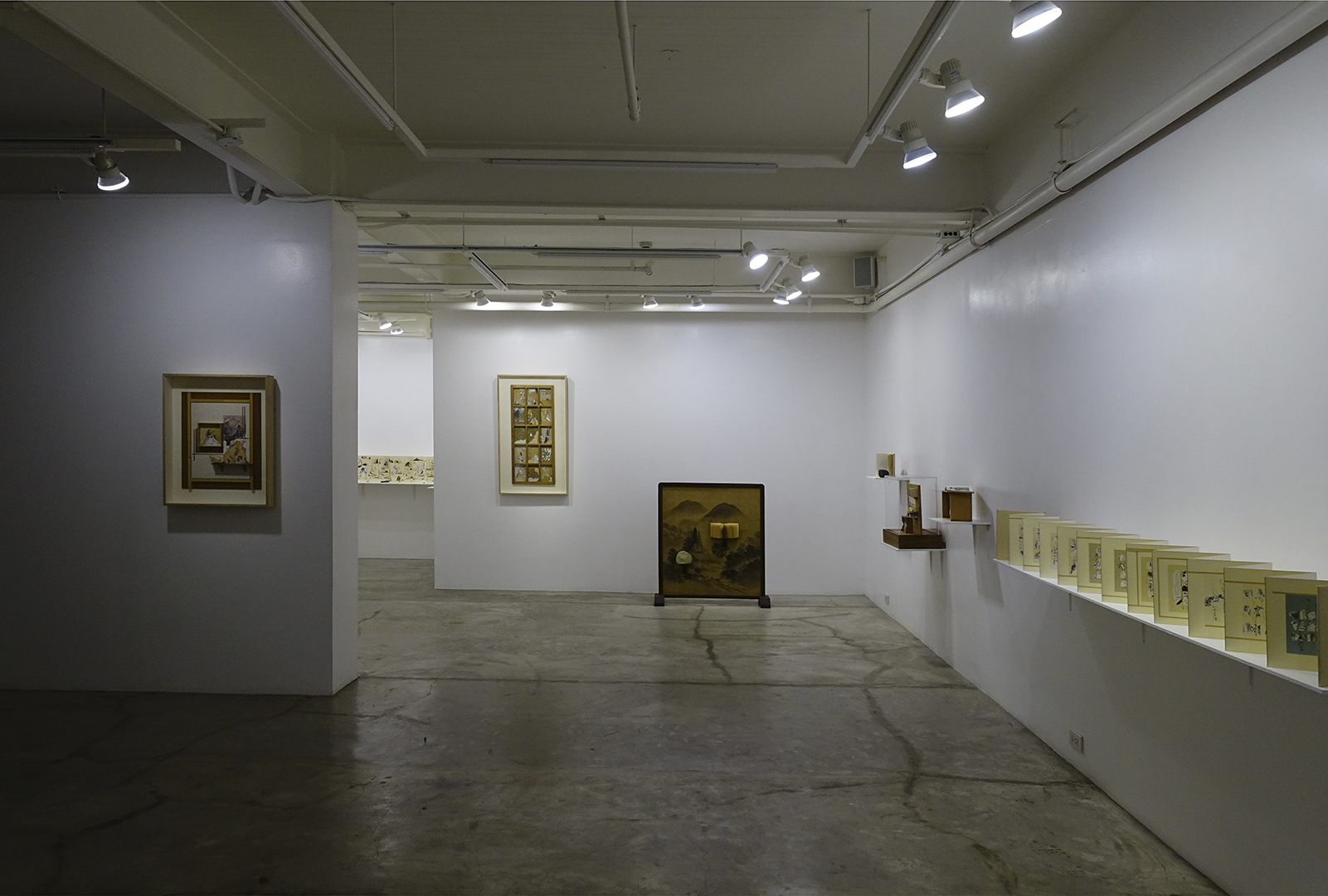 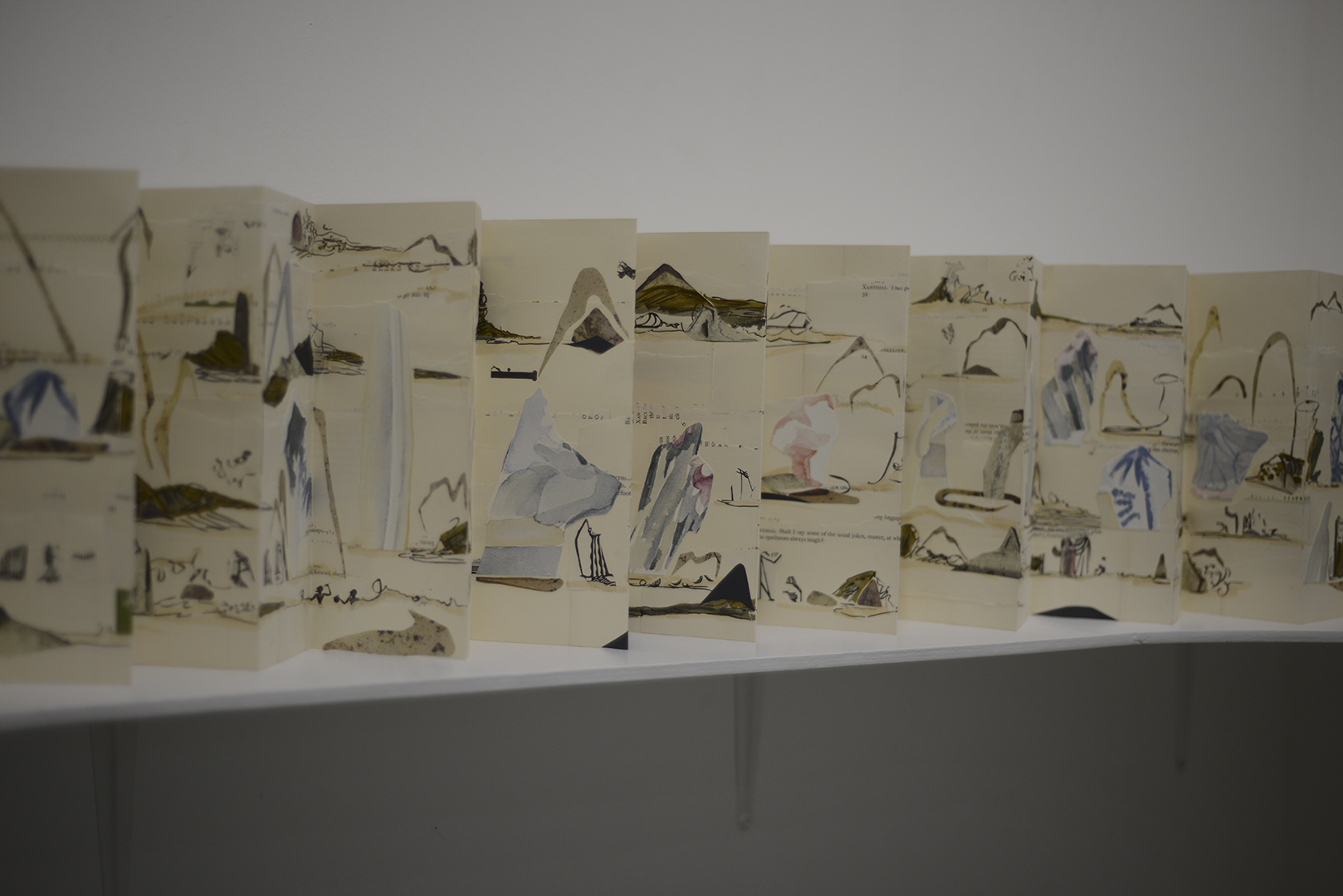 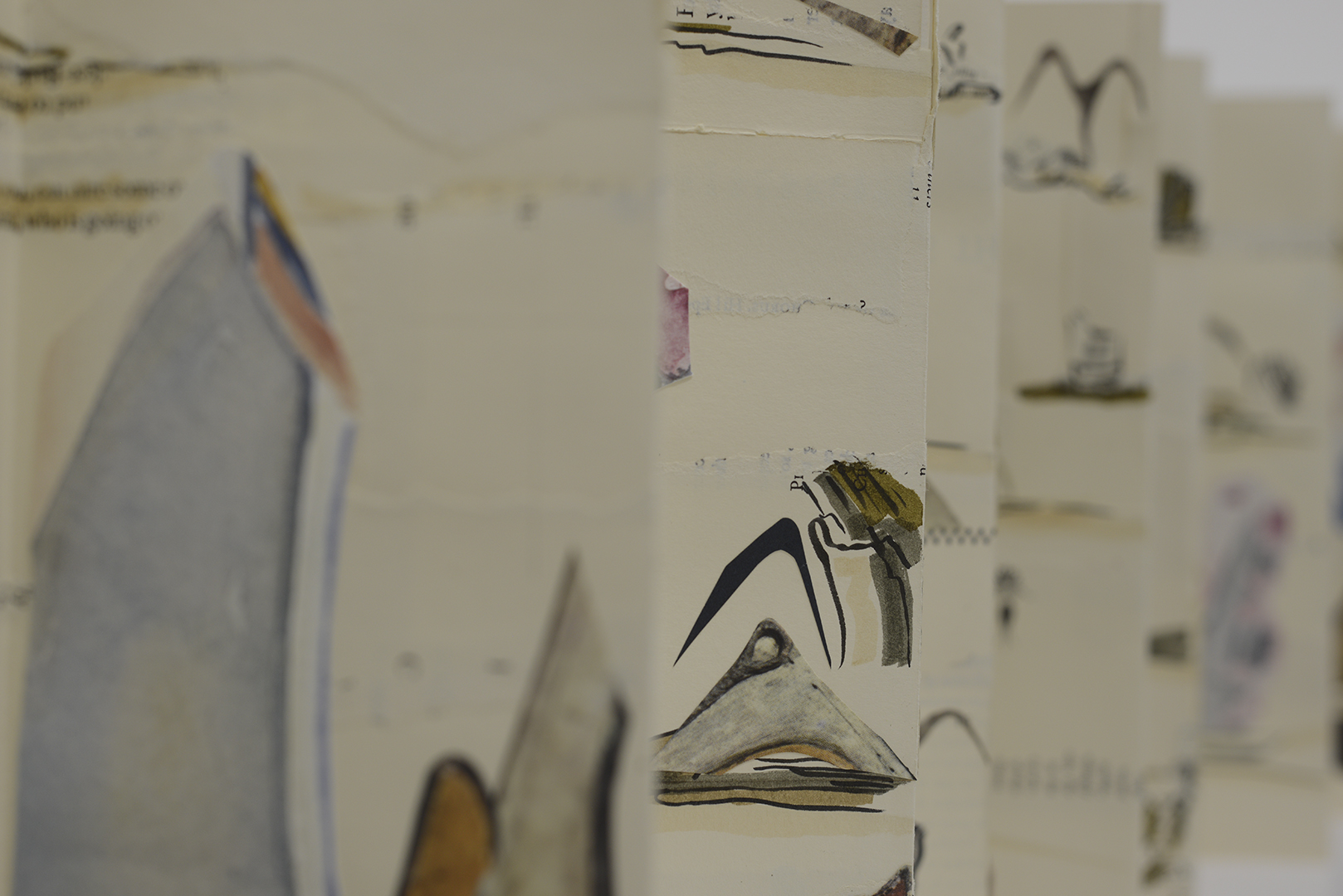 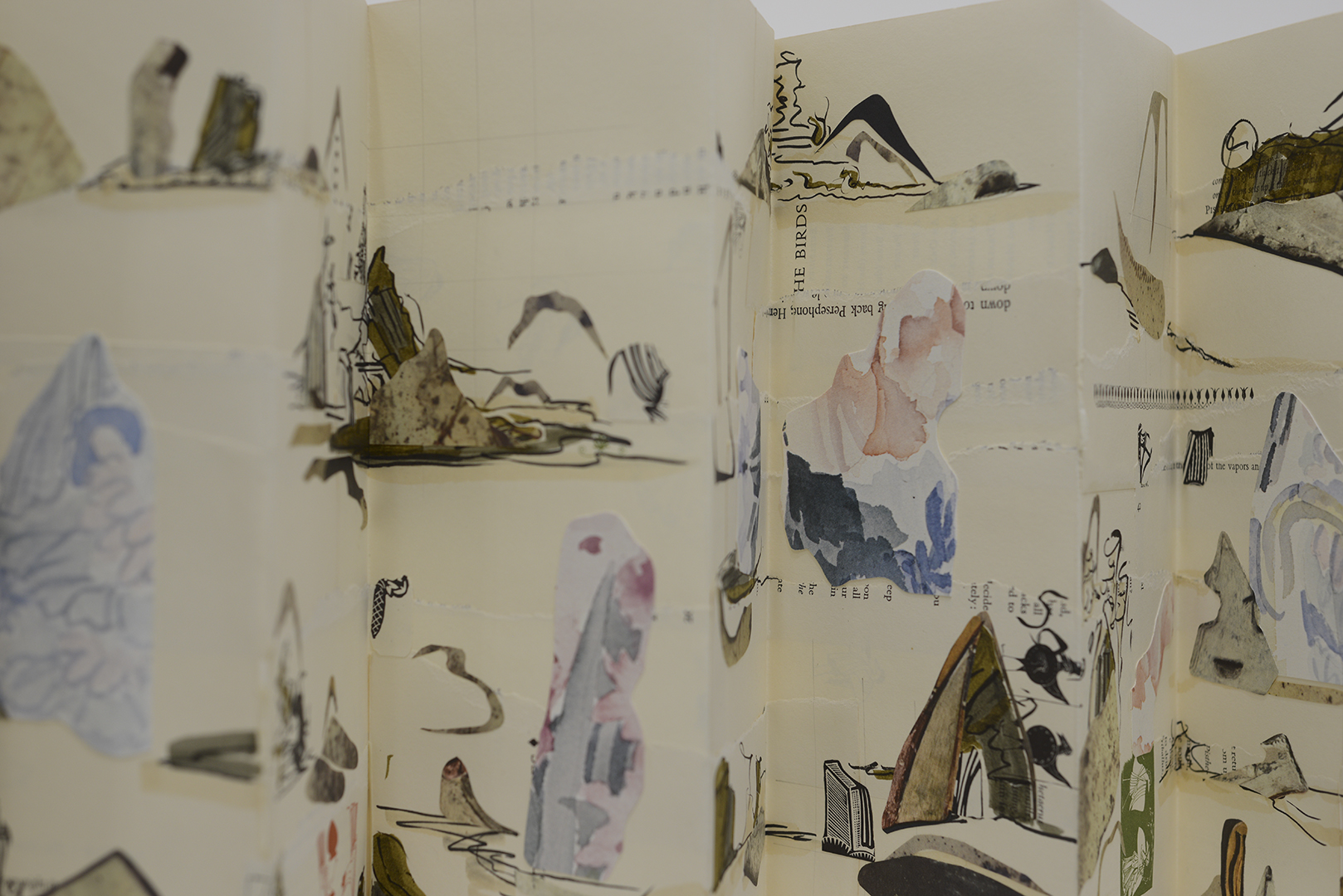 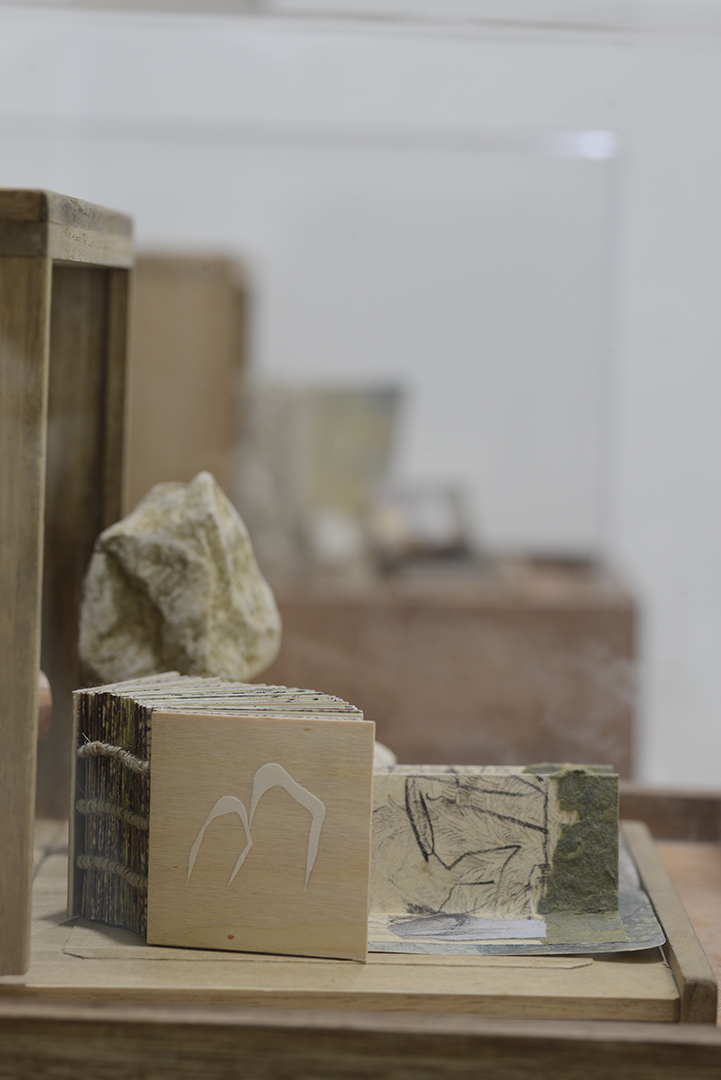 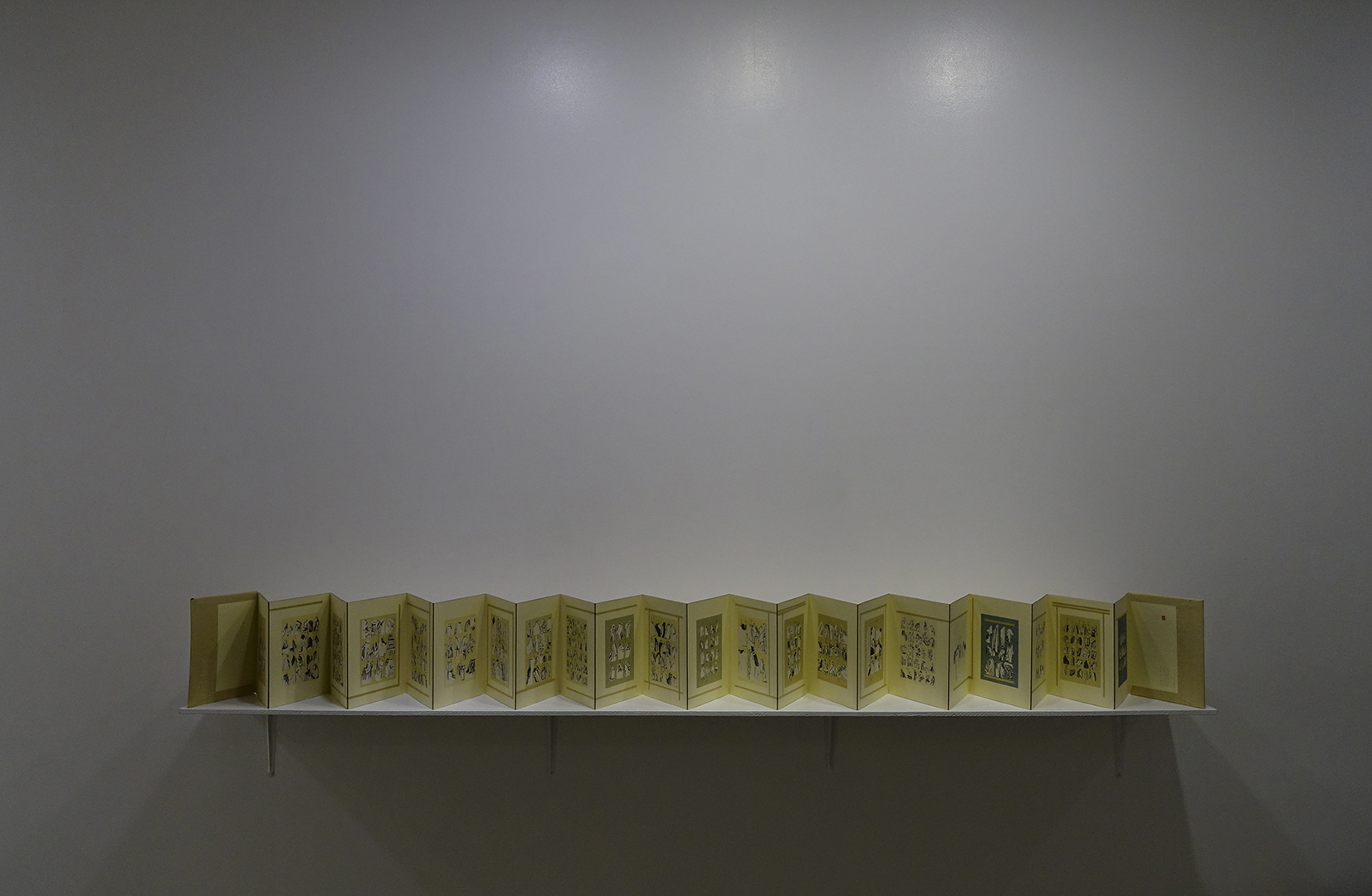 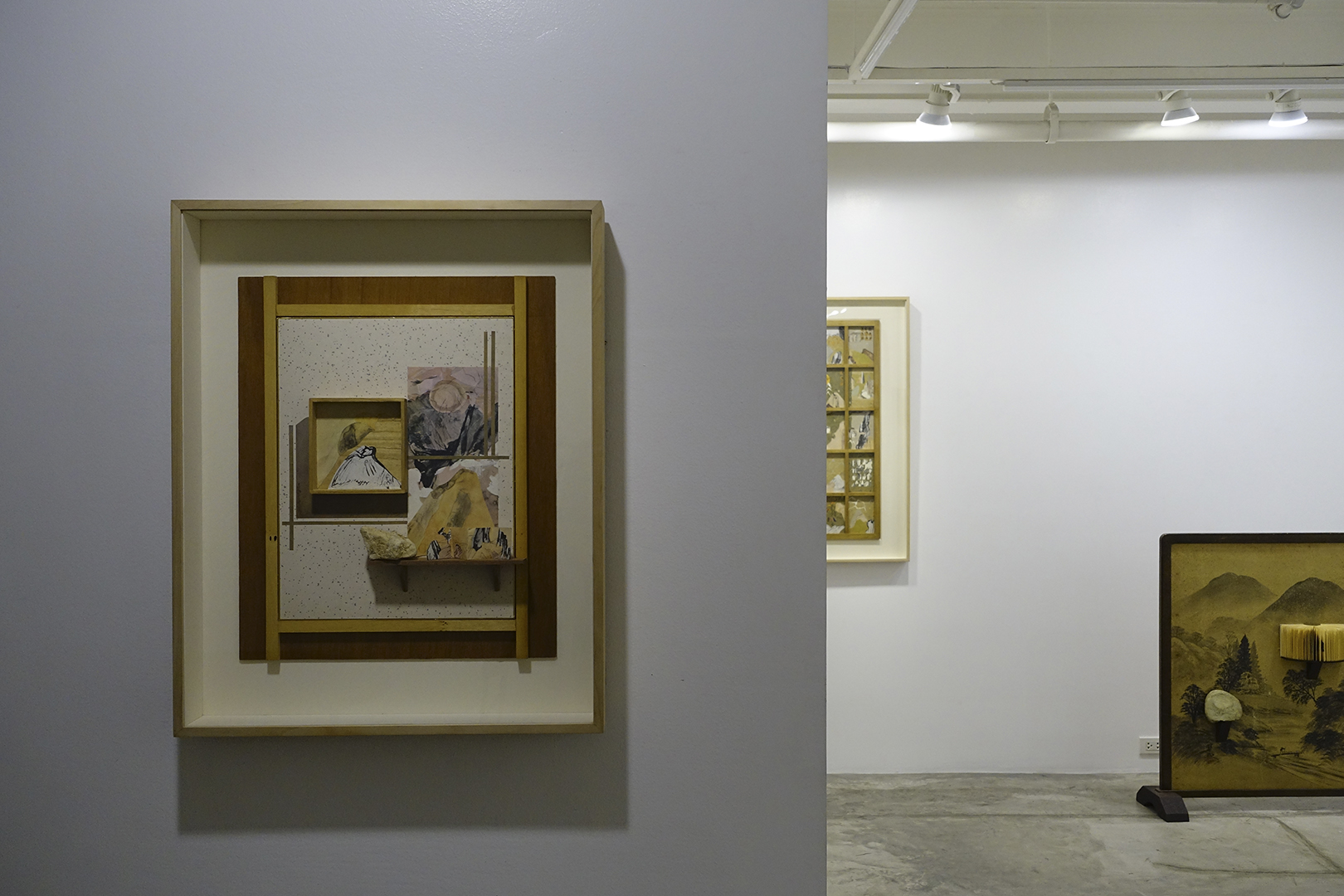 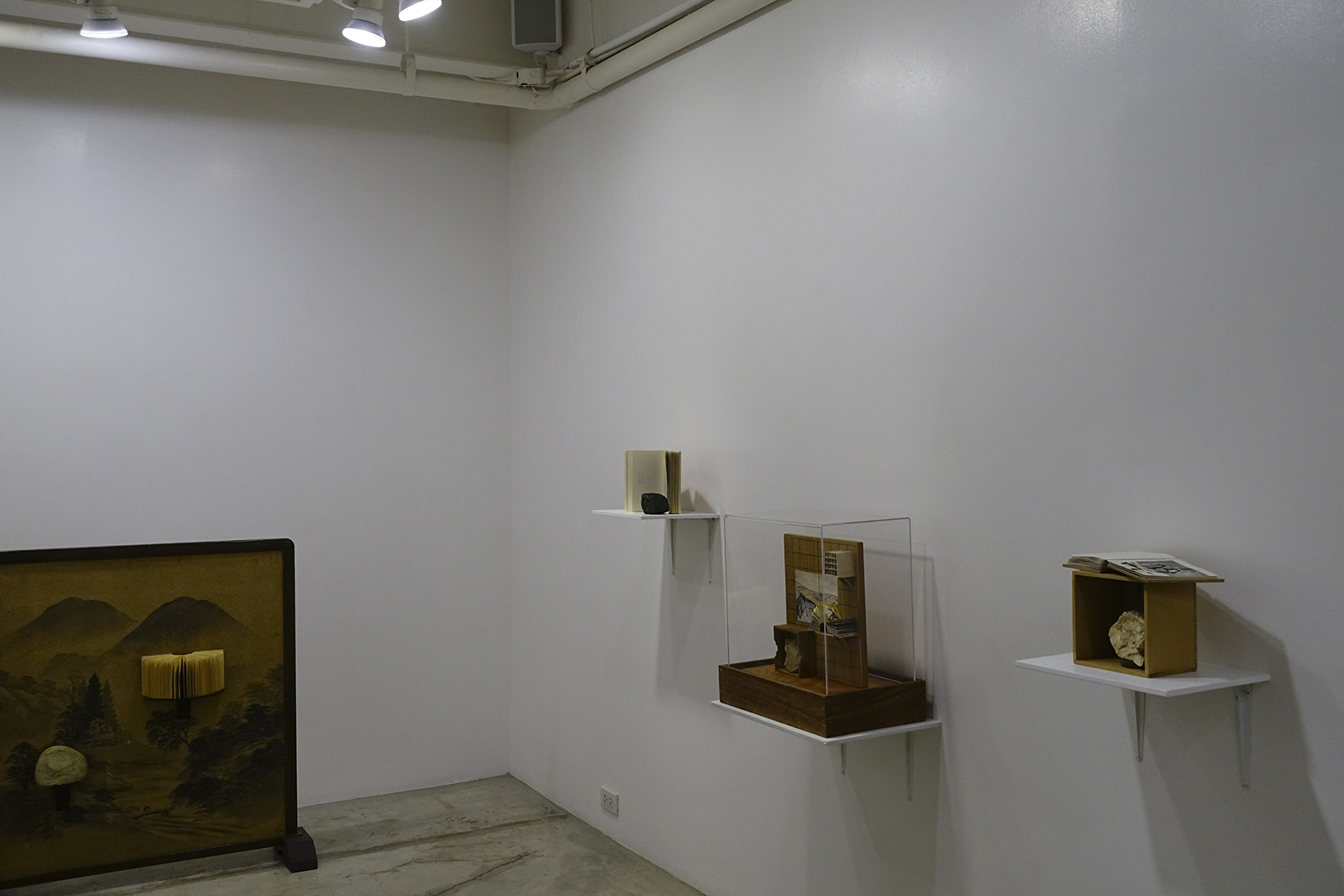 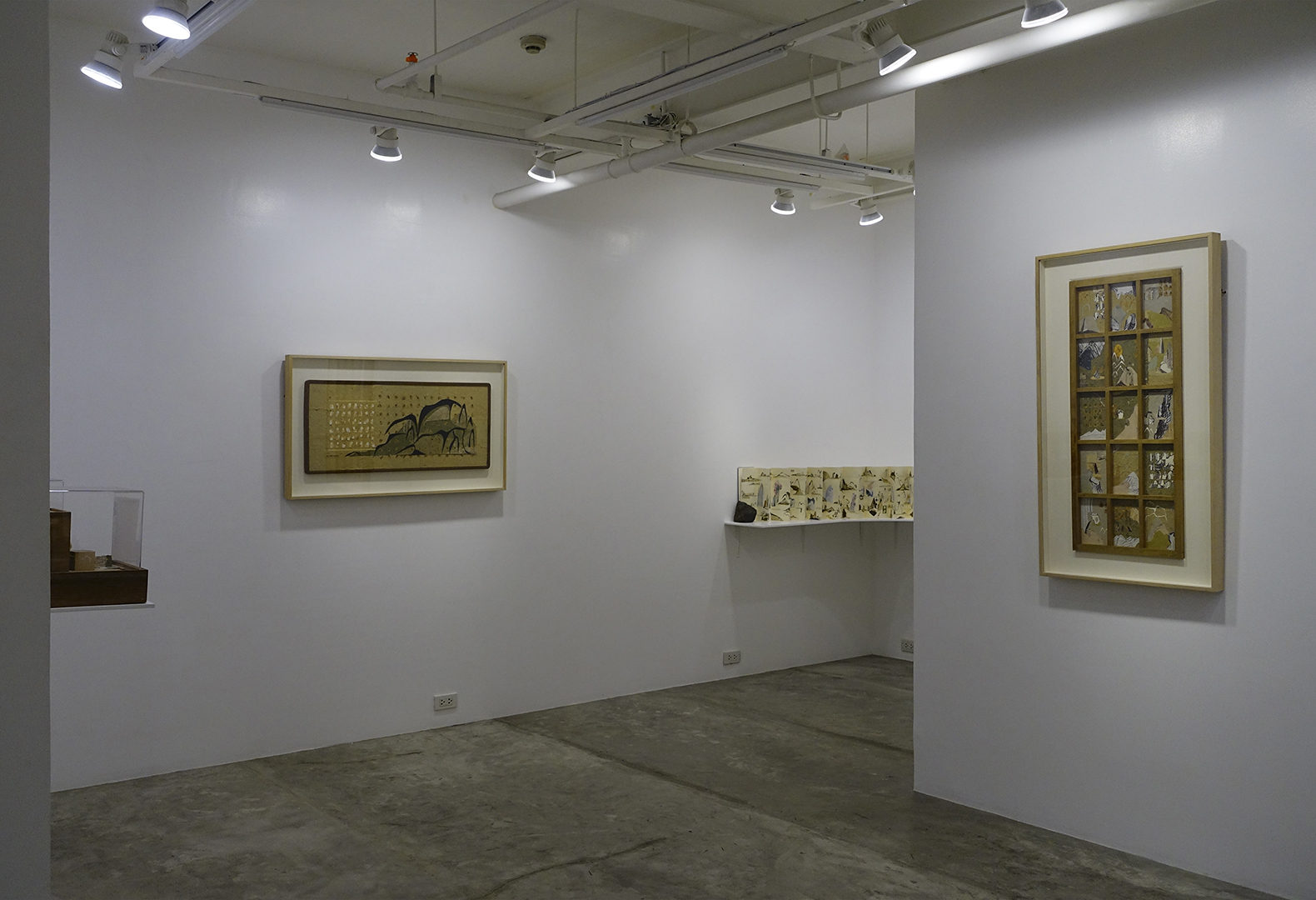 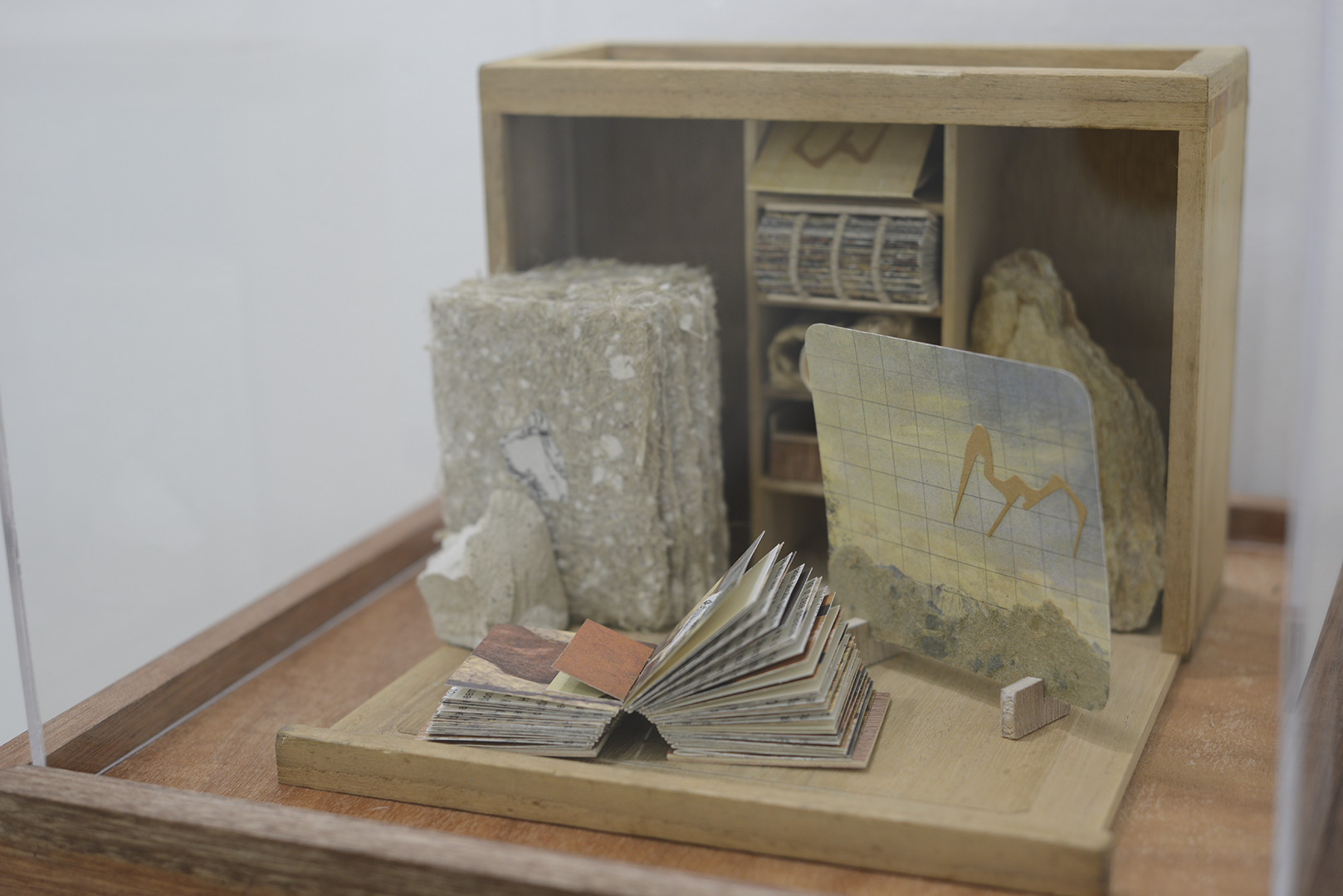 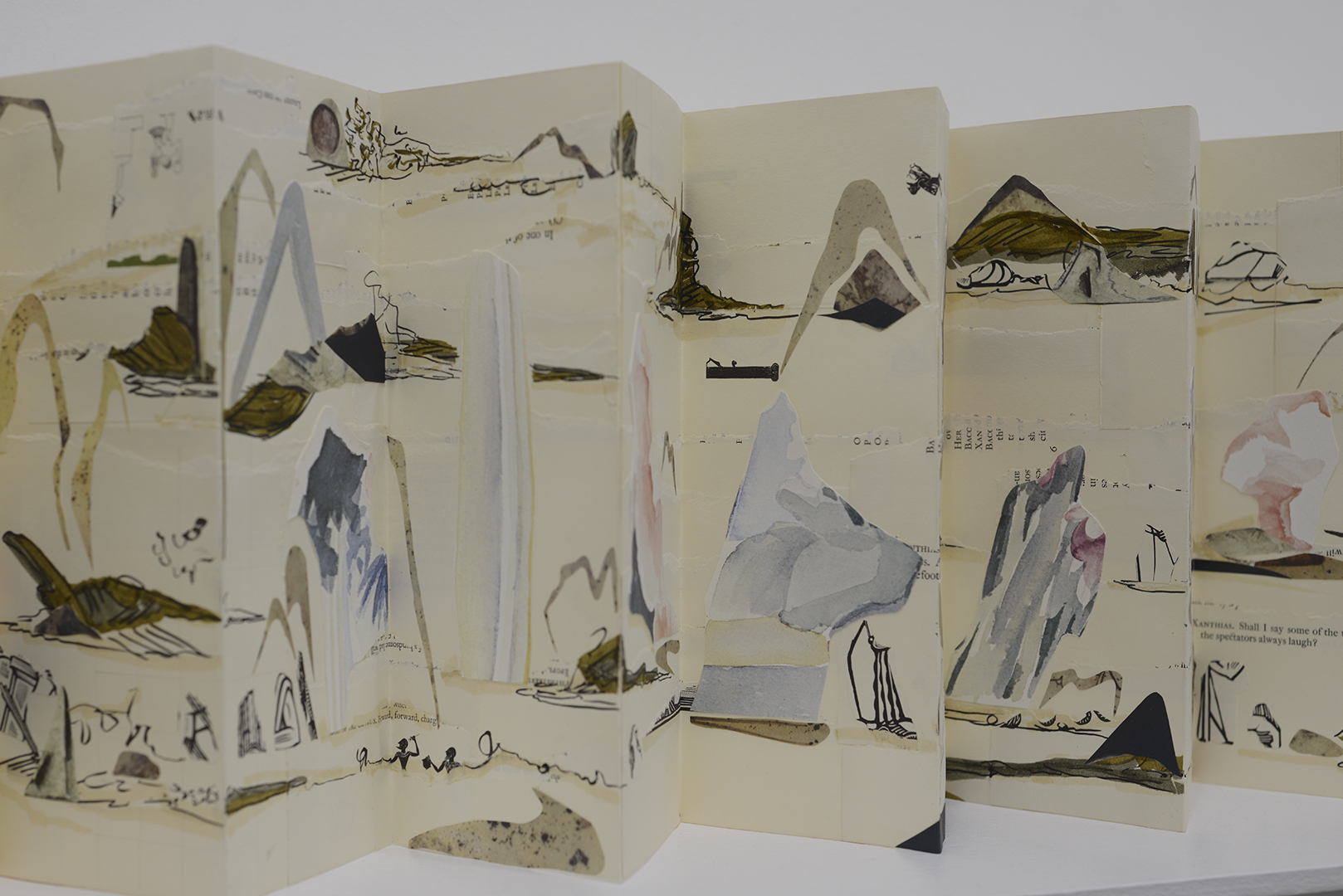 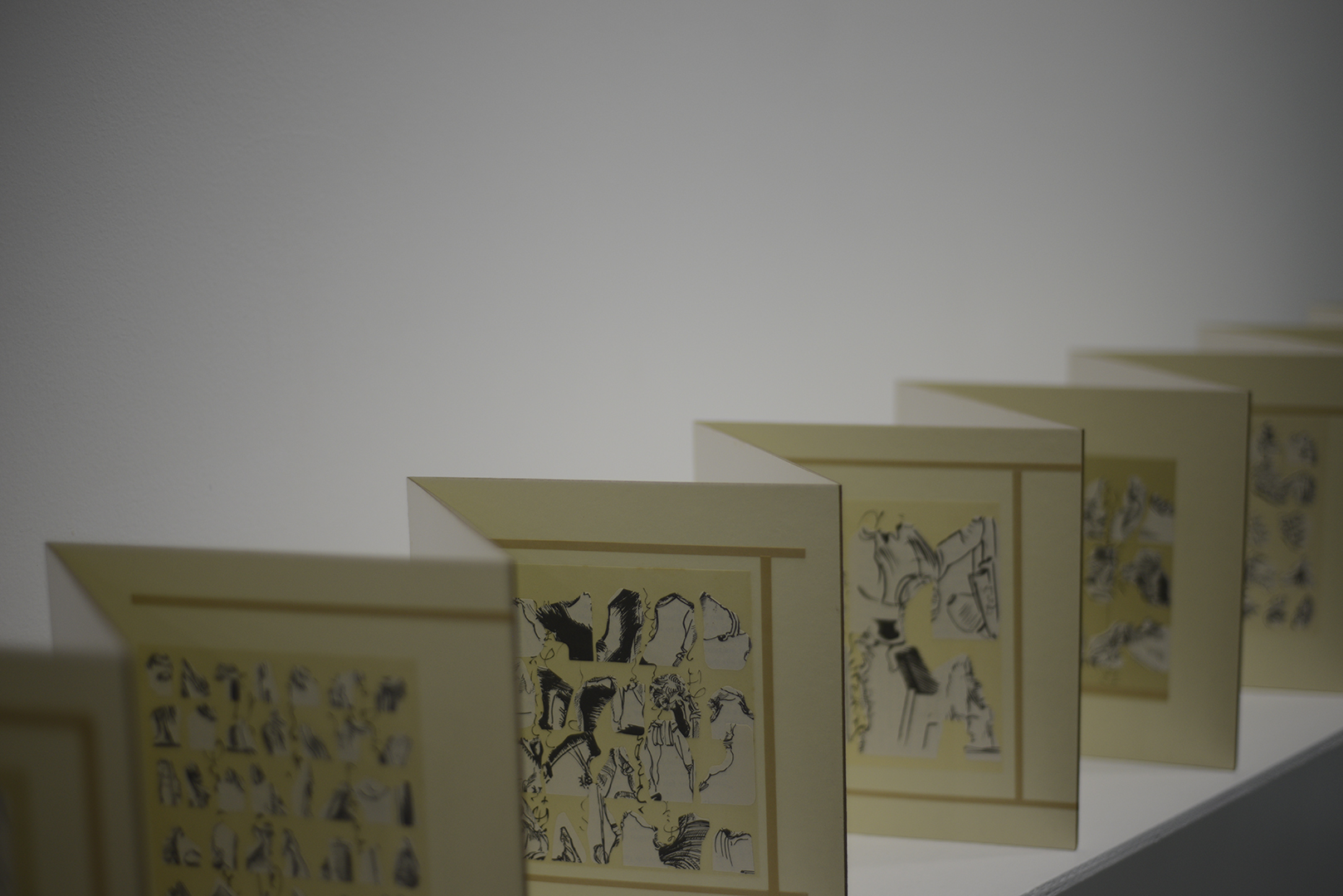 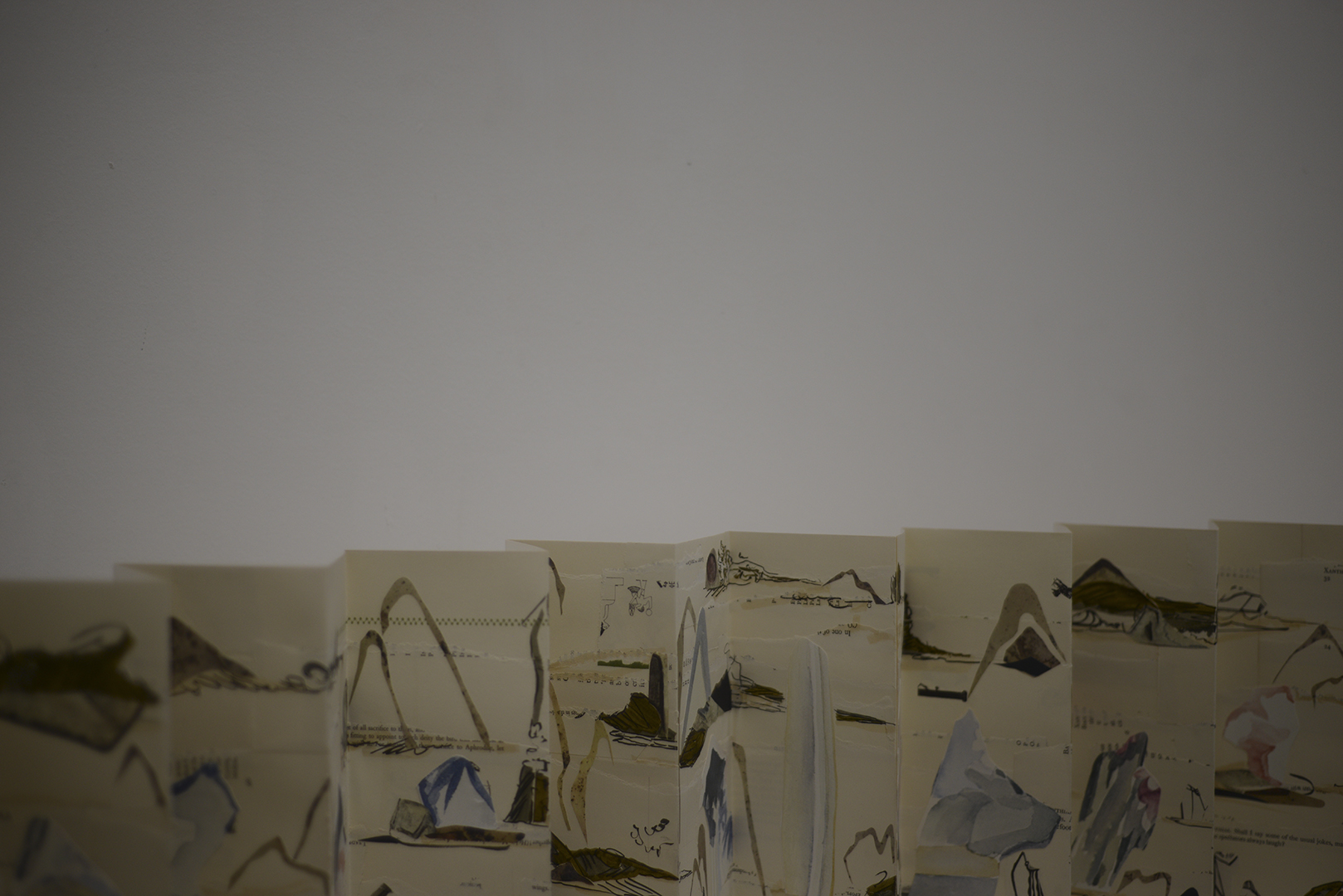 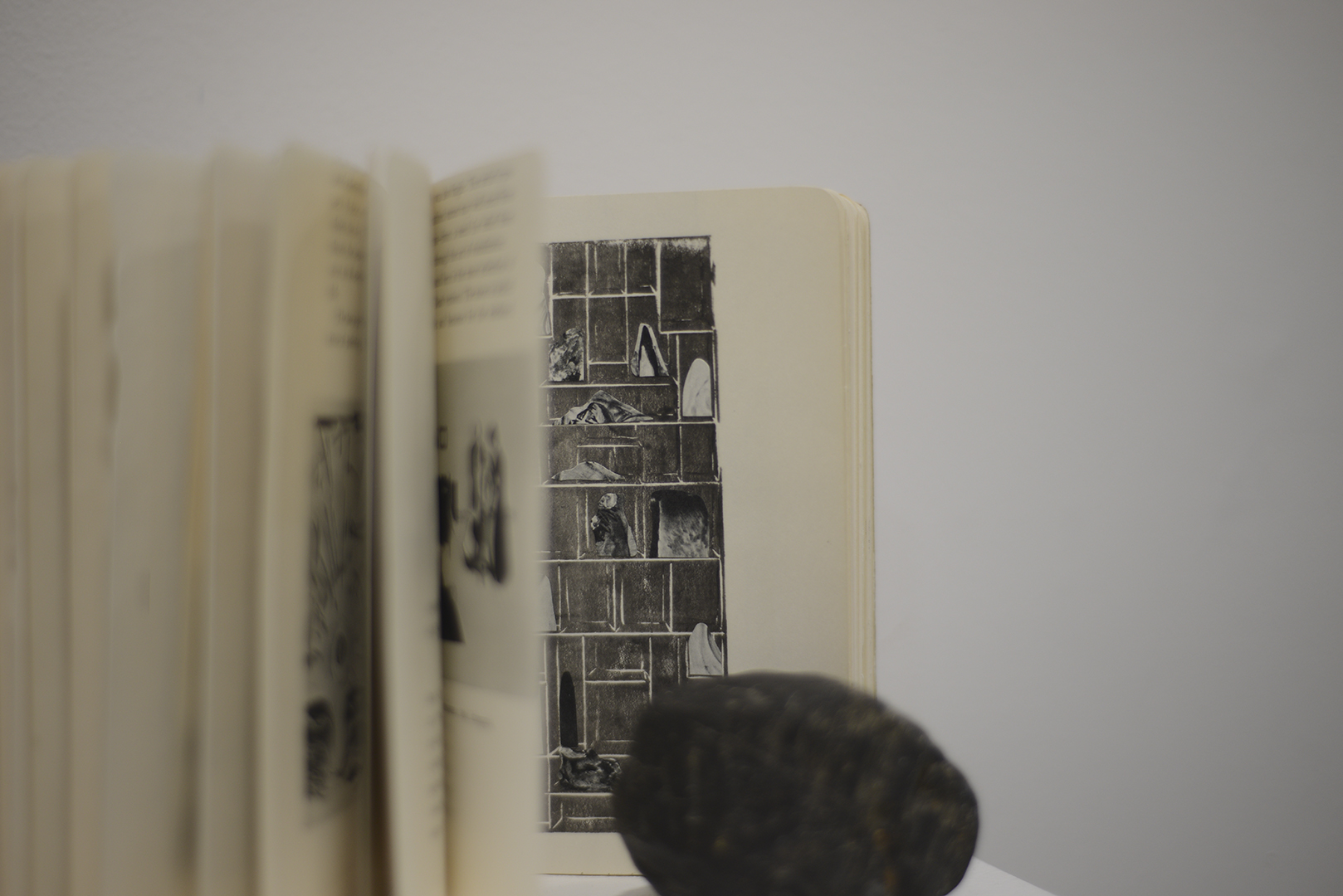 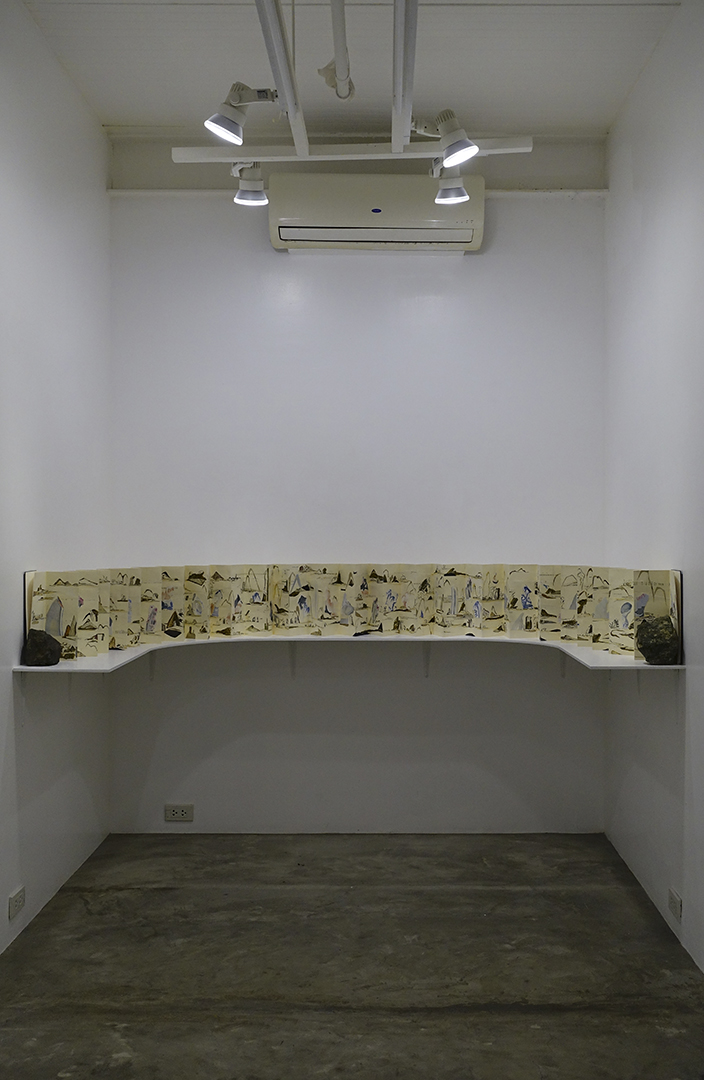