West Gallery proudly presents “Maybe I’ll Tell You Sometime” by Clarence Chun, showing a new suite of paintings that plumb and push the material quality of his medium, blurring illusion with abstraction to far reaches of individual narrative, subjectivity and symbolism, gesture and style, information and meaning, in tracing the speed of automated experience, the movement of signs, and authenticity amidst a universal network of fluctuating exchange.

Waves of ever widening sweep and extension travel across the painted surface in various saturations of pink, yellow, white, and blue verve, that indicate not only dynamic motion but also speak of their substance and composition, symbolism and signification, abstraction for an active consciousness. These intertwining streams might harken back to memories of water, where Chun is accustomed to while growing up in Hawaii, the breathing of the tides similarly reverberating with force and intensified speed, racing with the surf providing a certain pleasure. Indeed, movement detailed in the picture are codes for patterns of migration and connection to the electronic superhighway, to a world-wide web of communications and vast visual information. Various screens and platforms, together with diagrams and perspectival linear systems, break the large continuum in the artist’s paintings, the iridescent silvery surface lending to the mercurial quality of Chun’s abstracted reality that is ruled throughout with points of orientation and cascading folding space, the world floating by as if coursing through a computerized monitor. Interrupting the seamless continuity of this flat surface are bursts of gestural power that congeal into biomorphic assemblages twirling, stretching, scattering, endlessly at the cusp of a creative big bang – what would be the picture of the future if not an image of constant flux and mutability were it not for turbulence along the journey that catalyzes evolution. Though apparently rupturing in constitution from its trajectory and velocity, these organic hybrids contain myriad data: bits of imagery from the artist’s graphic archive, fragments of painting studies, digitized pictures from stock, patterns and designs from memory, linear silhouettes, and an extended array of expressionistic brushwork that includes smears and scrapes, drips and pours, pitches and tosses, washes and saturations, thin and impasto-paint elements: the artist distinctly pushing his practice into newer dimensions.

Chun specializes a paradoxical relationship with the practice of painting, creating impressions of speed and motion under the design of machine precision applied all the while with slow painting, with traditional means of painterly layering and transparency, with classical perspective rendering and composition, drawing and stenciling, finding a successful means of picturing contemporary time without bypassing humanity for technology. Indeed, there is something alchemical in Chun’s process, other than the symbolic transfiguration of organic marks from primal abstraction into simulated universes, from its fervid experimentation with base pigmented matter into explosions of cyberspace. The picture holds many secrets, processing identity by design. It is the knowledge that elements within the painting are there for they do mean something, not just actors running around a grand stage, or some bachelors to a bride, even, that they contain information pertaining to personal experience and memory, albeit encrypted and transformed into a visual language to be deciphered. In fact, the artist appeared in a dream, where he was asked the meaning of his work, naturally saying: information. Hence, square configurations are not just spatial dividers but also open pools and hatches to fall into and escape, burgeoning bands are not only bodies of water but also time signatures and cryptic scribbles, some areas have formulas or notations about the painting itself like commands from

higher beings so to say, or the iteration of forms echoing the stutter of a favorite camera, the glitch from film material, floral ornamentation from tender settings, all of which the artist seems to say “maybe I’ll tell you sometime.” 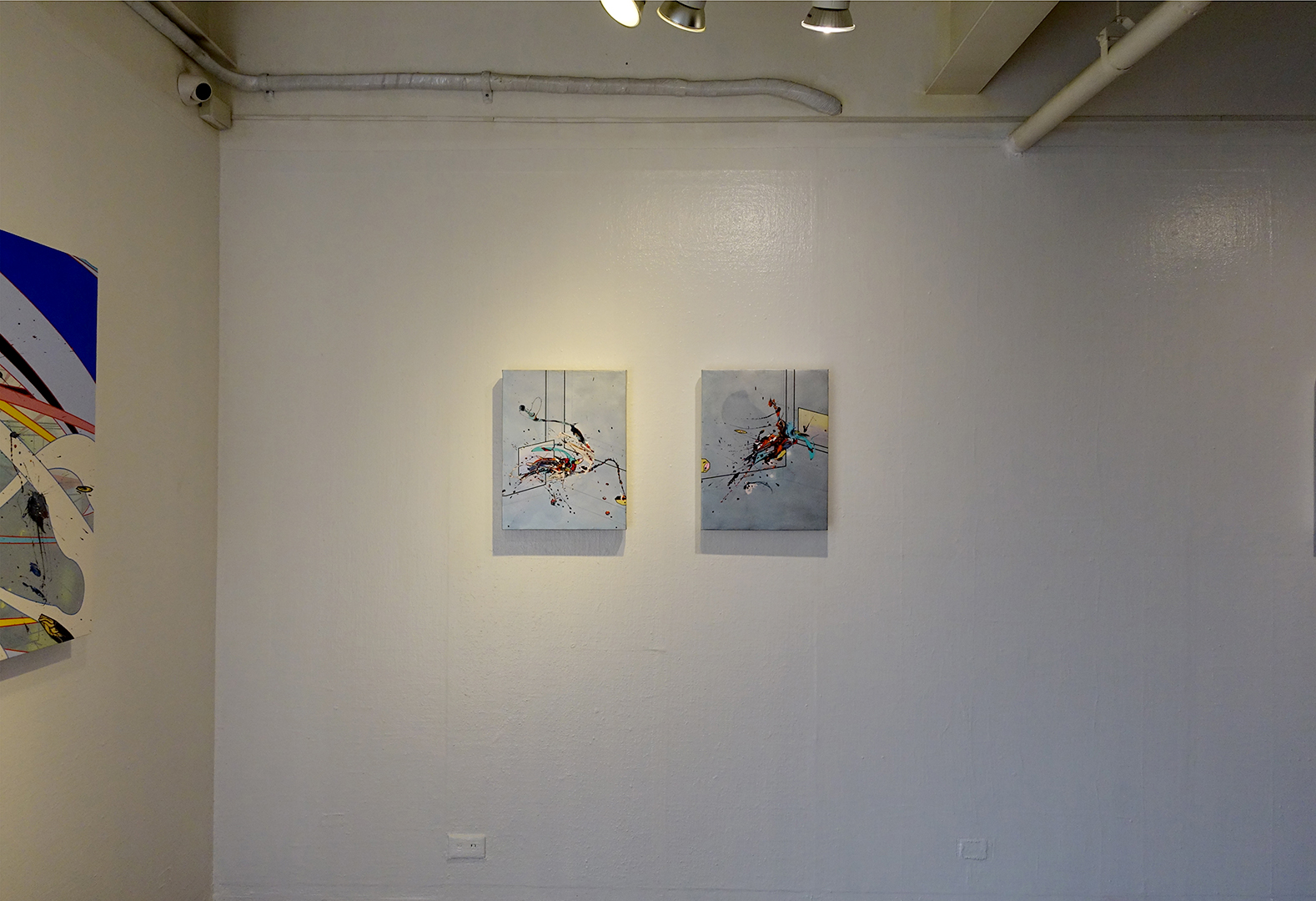 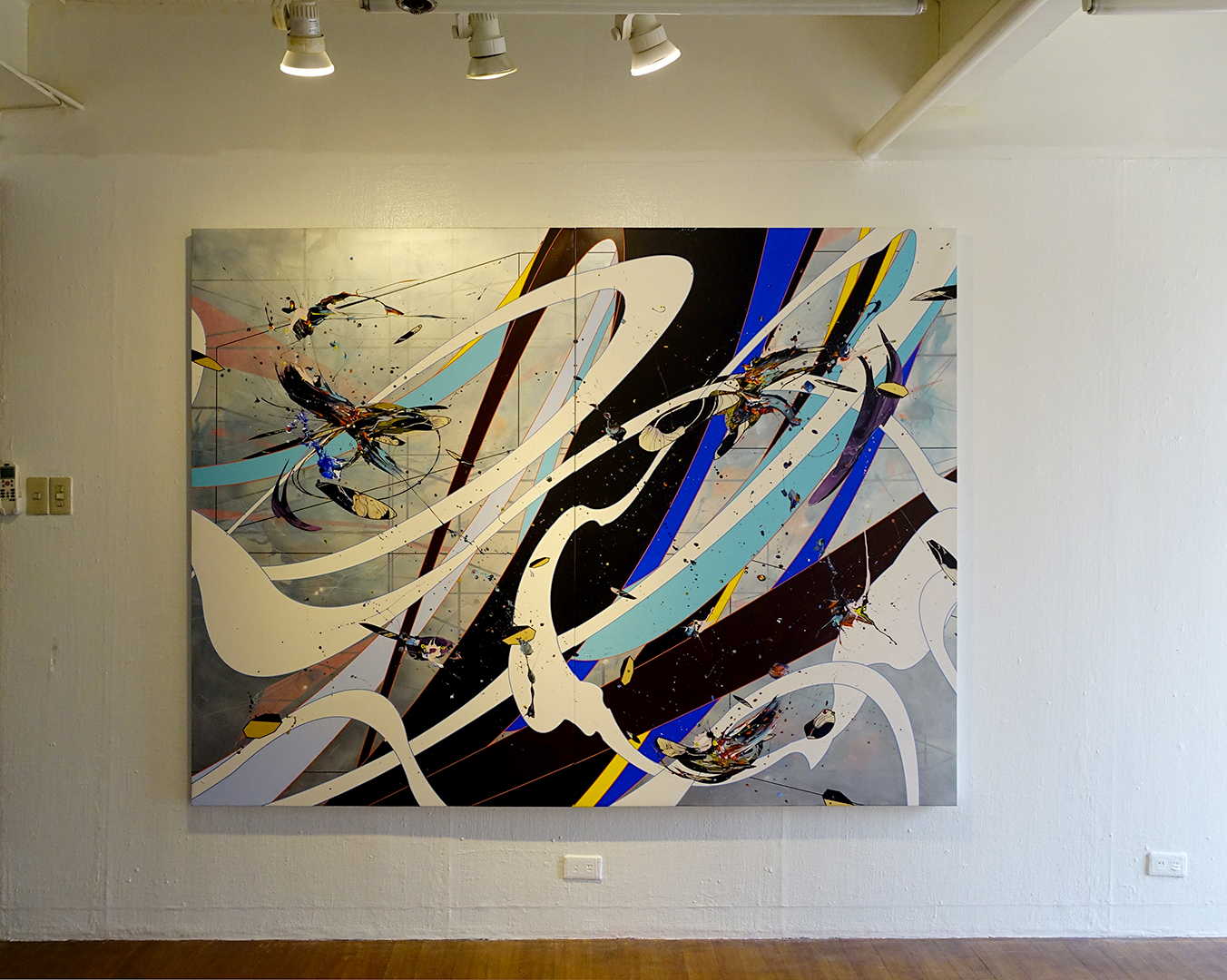 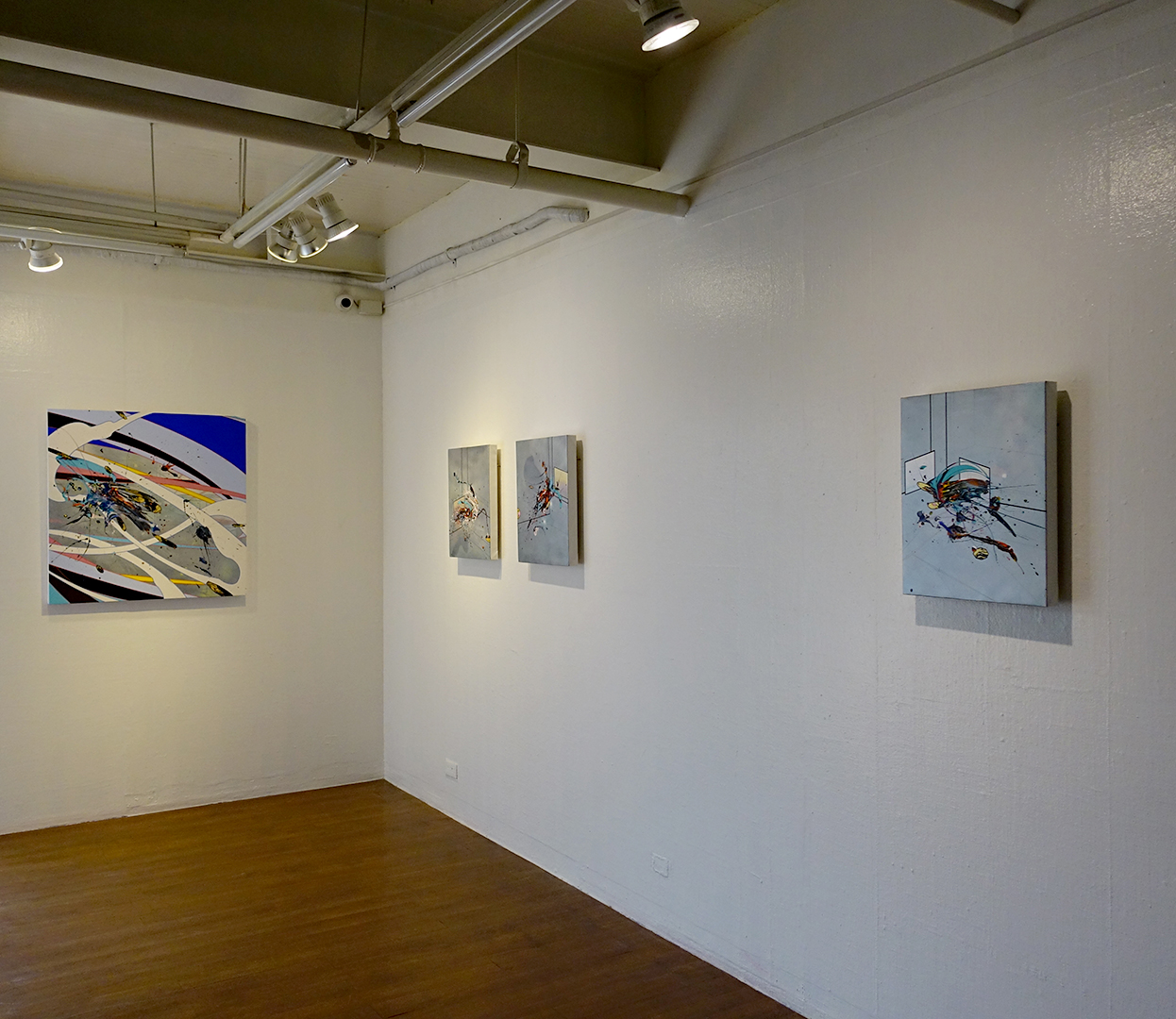 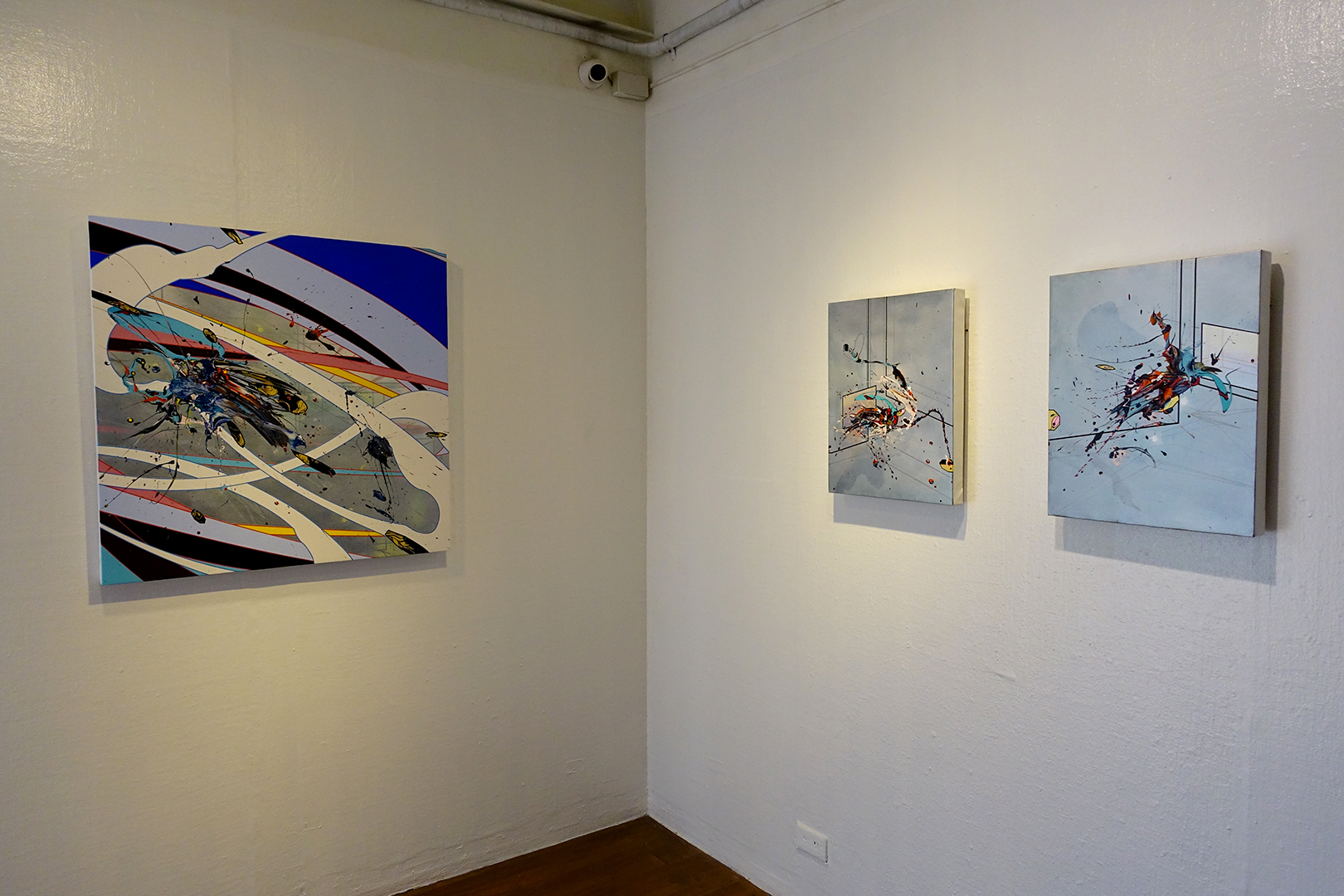 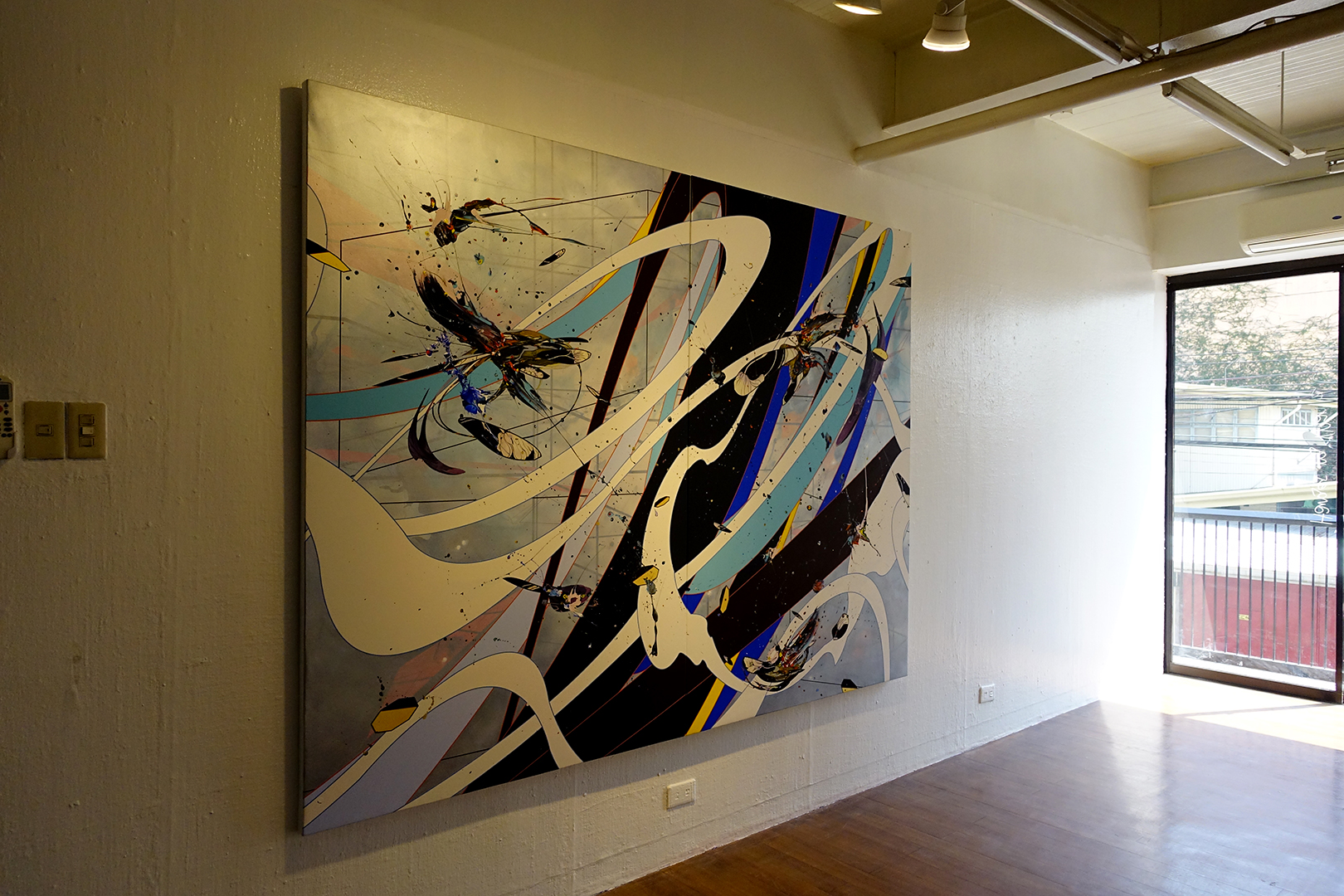 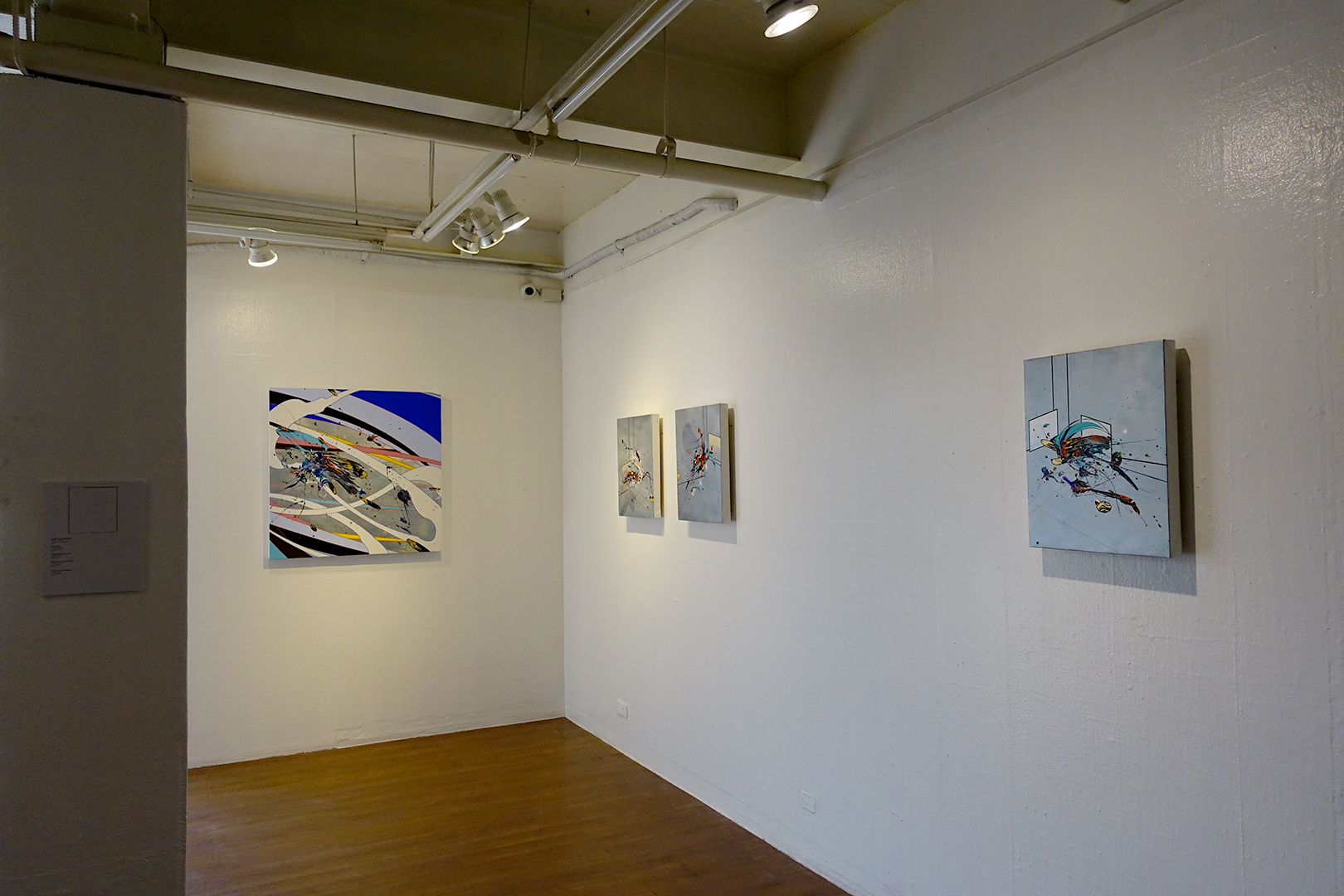 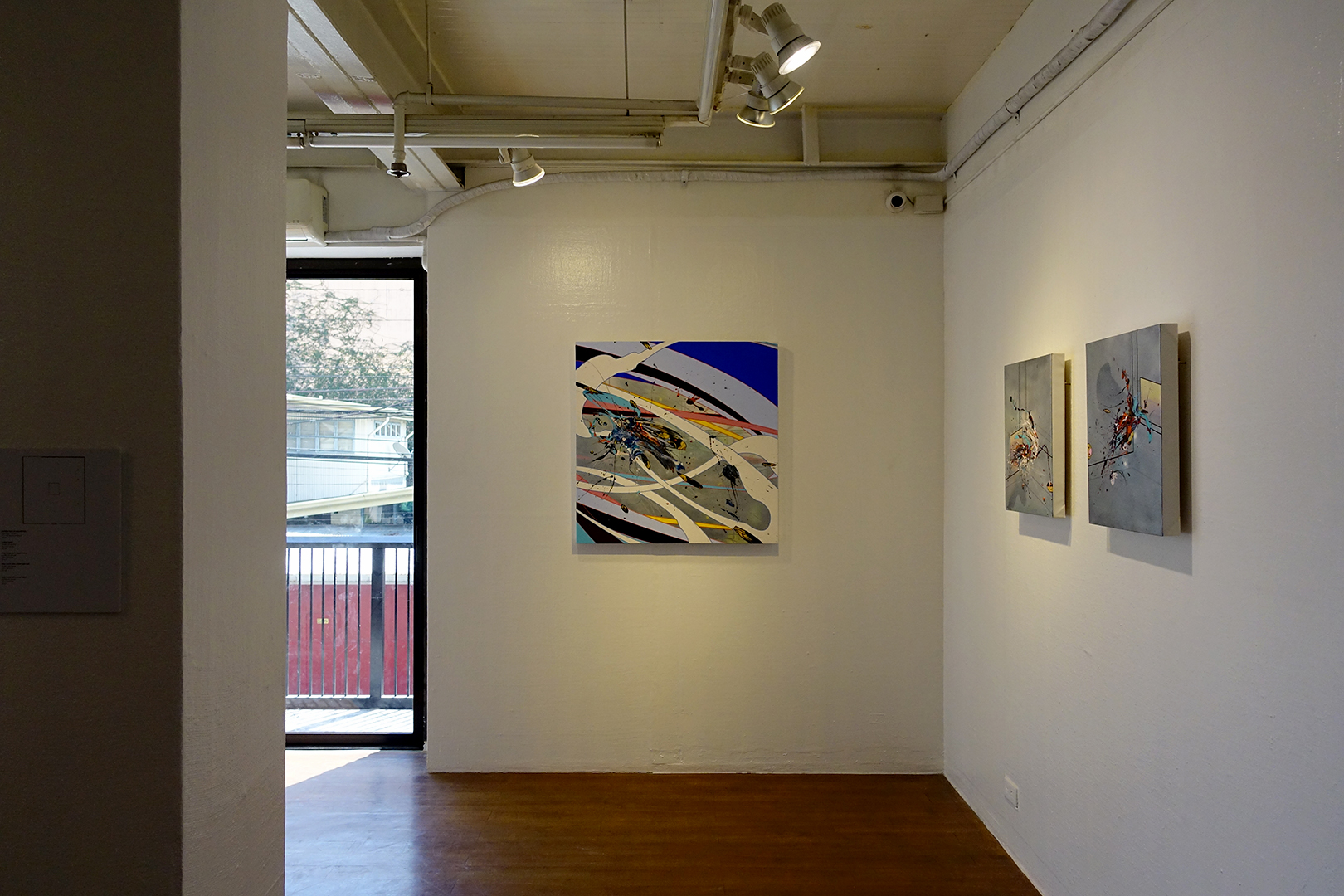 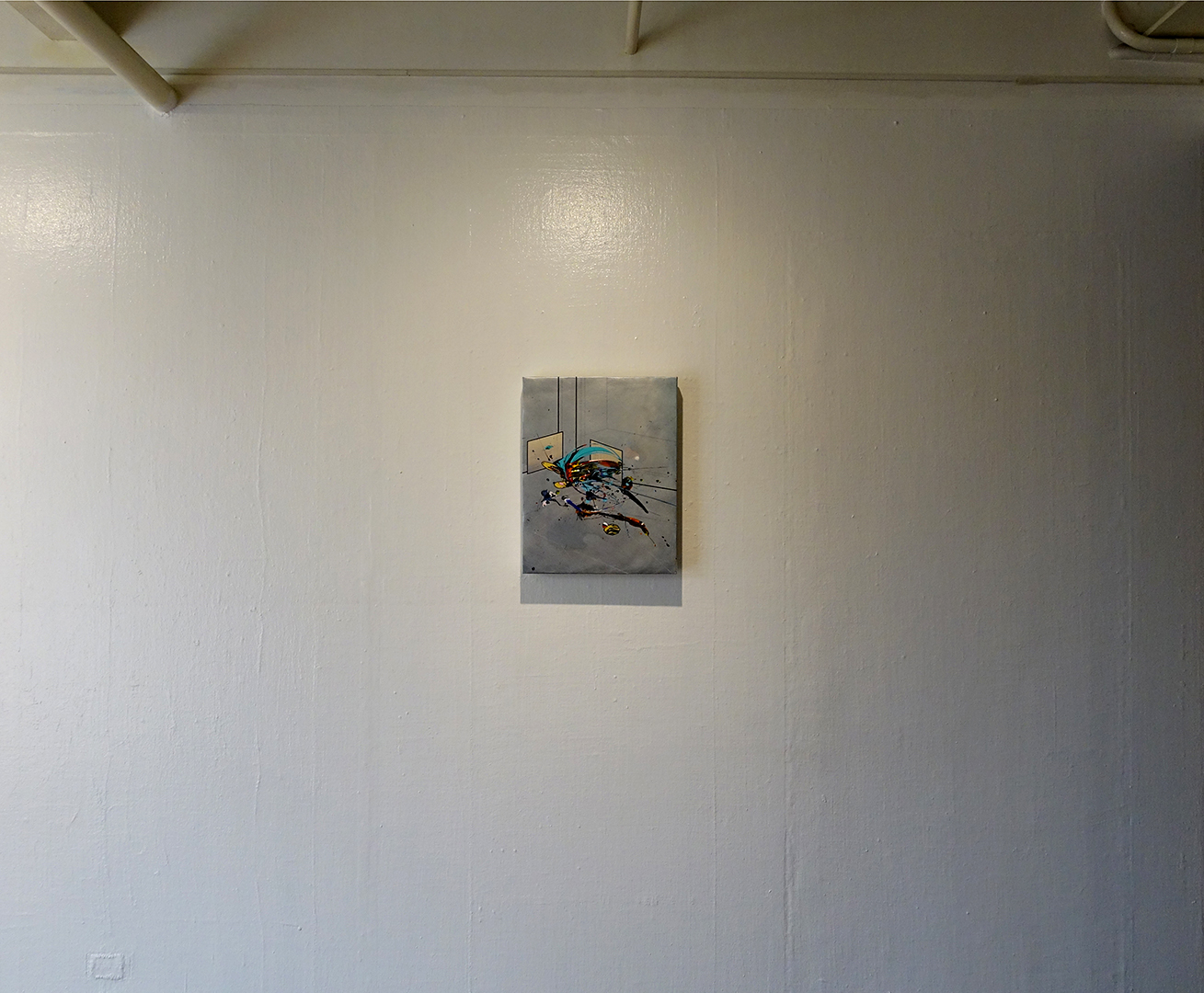