“Every artist paints himself” (Girolamo Savonarola, 1494)

Every painter paints himself, a saying first documented in the early Renaissance, has been mentioned by artists ever since. “Nobody is representing anything,” Lucian Freud (a great inspiration to Kaloy Sanchez) once said of all art, including his own. “Everything is autobiographical and everything is a portrait, even if it’s a chair…. It is about myself and my surroundings. It is an attempt at a record.”

Kaloy Sanchez’ solo exhibition ‘Behind Closed Doors’ presents in his focus four larger paintings of scenes of his studio, depicting a female model on a rocking chair, a female model on an Eames designer chair, a self-portrait as well as an empty chair from the art nouveau period.

Kaloy remains aloof from his models and sitters, they represent primarily a rapport that comes through in his work, and the figures and chairs Kaloy paints as merely the vehicle for figurative innovations. The works can be read as autobiographies about the different stages of the private life of the artist.

We see  an empty chair – with an air of presence, as if the fabrics might be still warm, and  the person had just gotten up – next to seated chairs, showcasing the duality of presence and emptiness. The empty chair literally transfers connotations of isolation, coldness, abandonment, but also somehow peacefulness.

The seated chairs with the female models as well as the self-portrait of the artist however do not mark an opposition either: Yes, we see young and beautiful people sitting naked on a chair in a seemingly safe environment, however they seem lonely, twined and introvert.

All of Kaloy’s paintings have always been executed in an apparent antique photo realistic expression, in our contemporary language we would say, they look like he put a sepia tone filter on top of them. I am saying on top of them, because the viewer immediately sees that the content is of now. No past times moments are painted. Details like tattoos, polished nails, a designer chair, and the entire physics and expressions of his models make it obvious: they are contemporary. Kaloy chooses friends who want to be involved with his work and to whom he connects emotionally. They reveal and shed themselves naked for the hours-long studio sessions.  Interestingly enough the viewer somehow only realizes at second sight that they are all naked – there is no sensual nor provocative message – on the contrary – the nudity states and highlights the vulnerability of the protagonists, who often experience the divestiture for the first time. I am saying protagonist, because to me Kaloy is a storyteller: on the painting with the Eames chair,  you see this beautiful girl sitting absorbed in thought, gazing down and you wonder what was the moment right before and what will happen after this; it appears to be a film still of a movie and you begin to guess who is in the room next door or who is in her thoughts she is deeply lost in.

The self-portrait marks the only painting in his solo exhibition with two persons being depicted: the artist sits facing the viewer on a popular filipino chair from the 50’s, examining his right hand in a deeply concentrated and as well lost-in-thought manner. The girl next to him plays a minor role, as we can only spot her lower back body. This scenery marks another ‘film-still’ of a story the viewer can complete in his mind.

All paintings unite a very silent, private and calm atmosphere – which leads to the second protagonist in Kaloy’s new paintings: his studio. Especially the work with the girl on the rocking chair marks an interesting viewing point where half of the painting is studio floor and the other half the naked model on the chair. Her face has to be thought by the viewer, as the painting cuts off at her neck. We always assume that the figures should be the focal point of a story, when in fact the surrounding plays an integral part too.

The smaller paintings of the exhibition focus on these surroundings and show the studio floor with all its’ traces from years of painting and sitting sessions. Traces are the presence of the absence. The countless paint drops, floor scratches, round glass stains are equally a historical autobiography of the artist as well the emotions transferred through the figures within this environment.

All paintings inherent stays an air of emptiness, no matter if the chair is seated with a person or left alone. This very strong combination of portraits and still-lifes (presence and emptiness) feels like a testimony to life itself: “Emptiness is not a state of mind but it is the essence of the mind.”1

The counterpart to this emptiness marks the multi-layered studio floor, which is filled with marks from years of working, conceptualising, and yes, living.

“Emptiness is the fullness of potential”2. 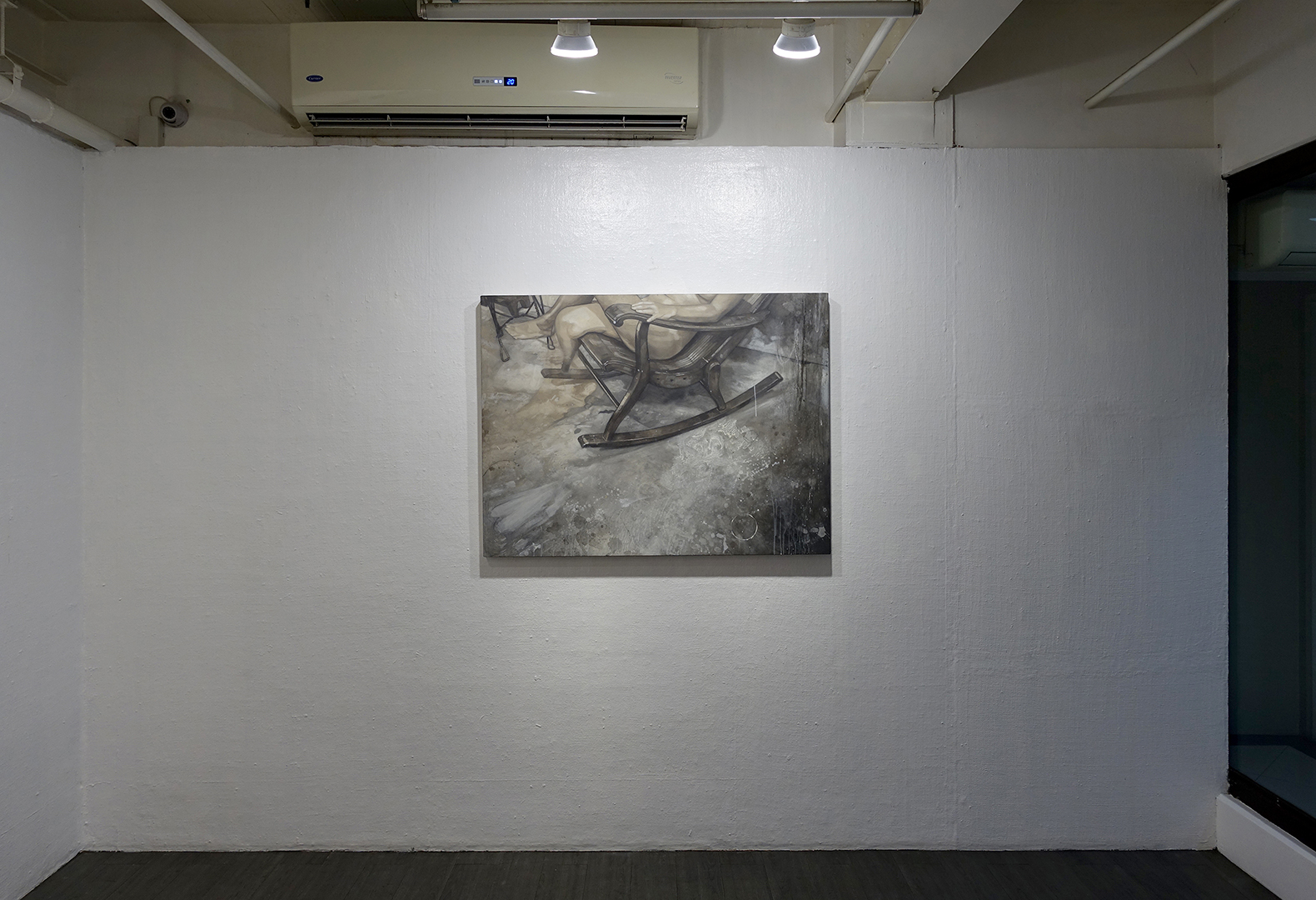 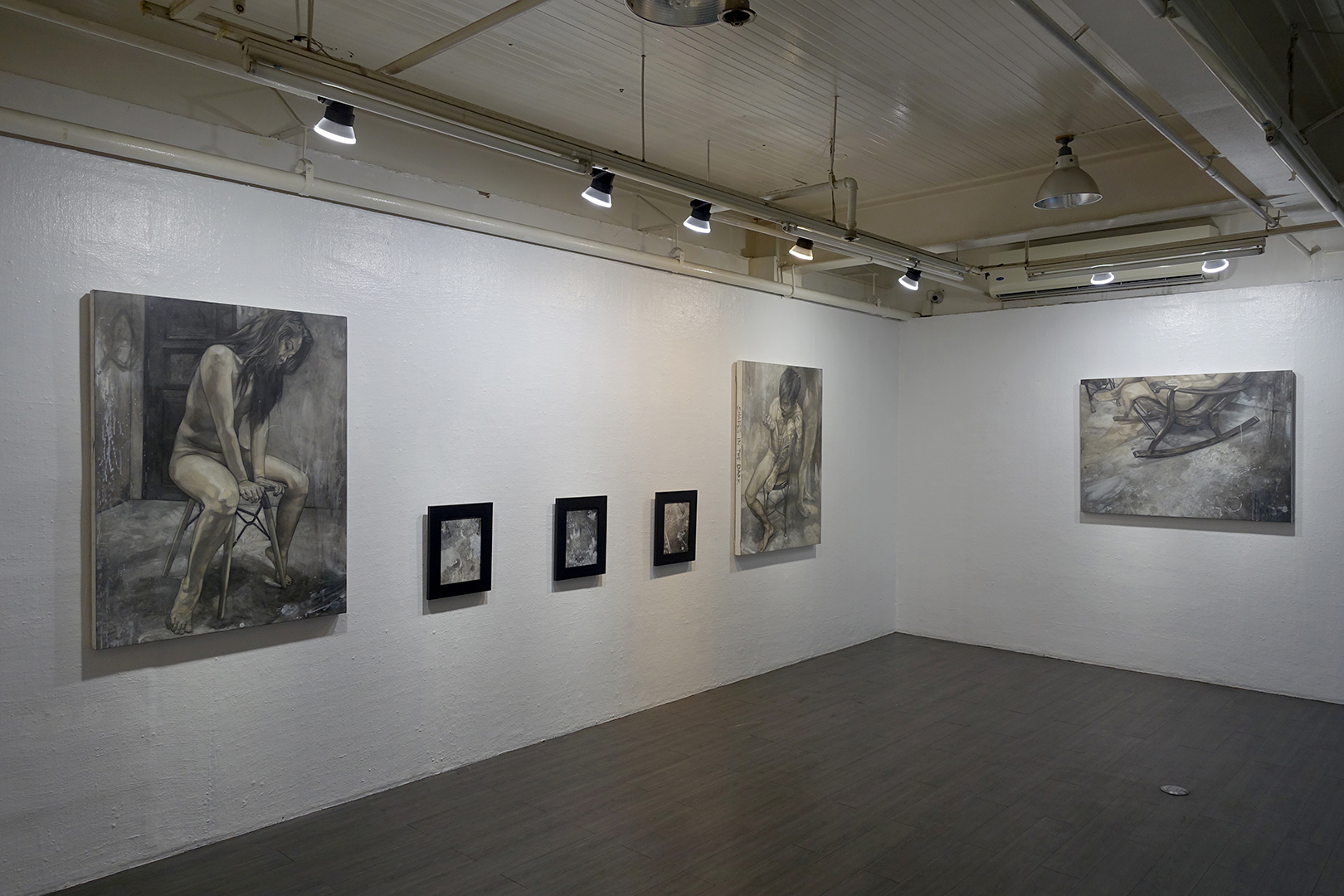 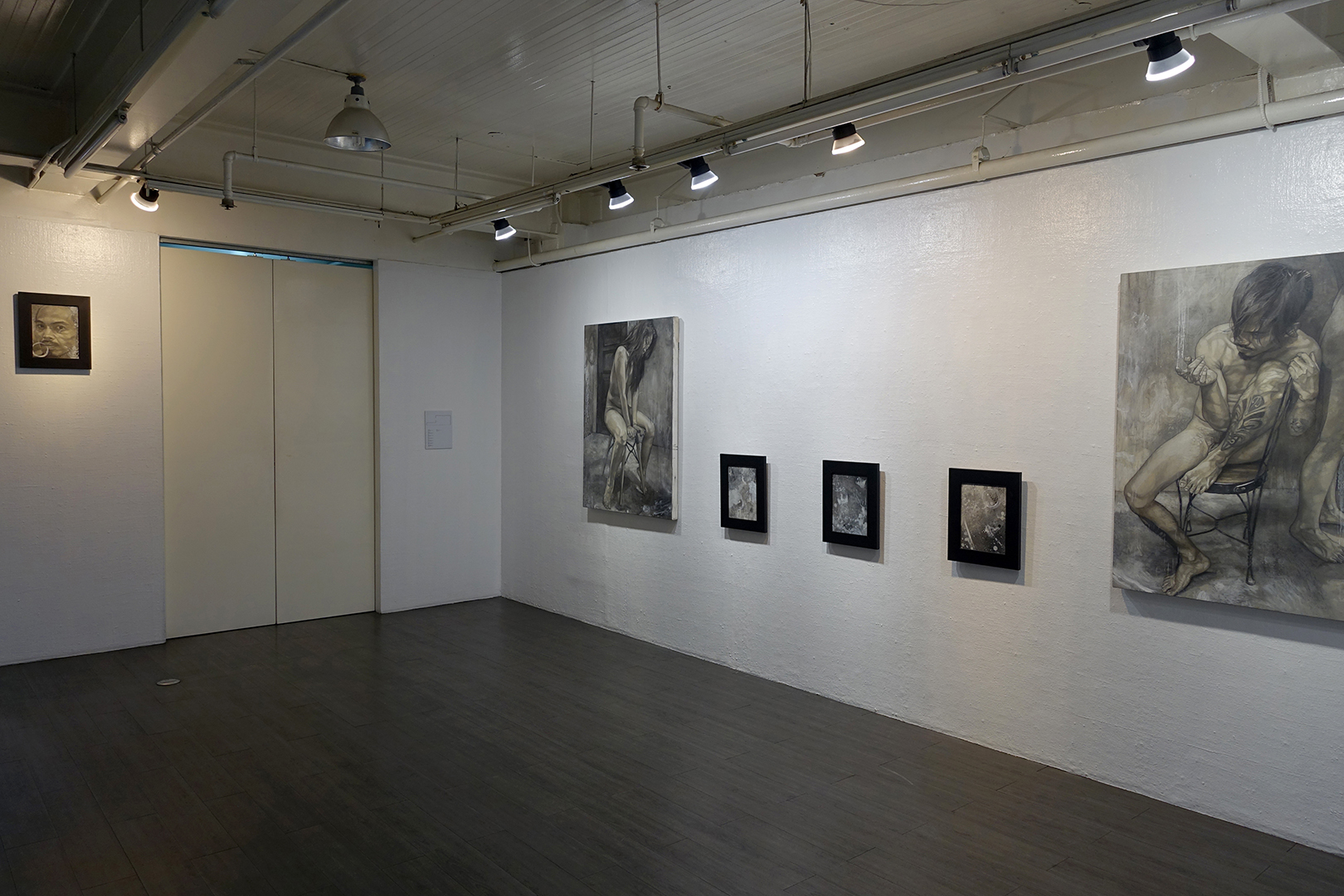 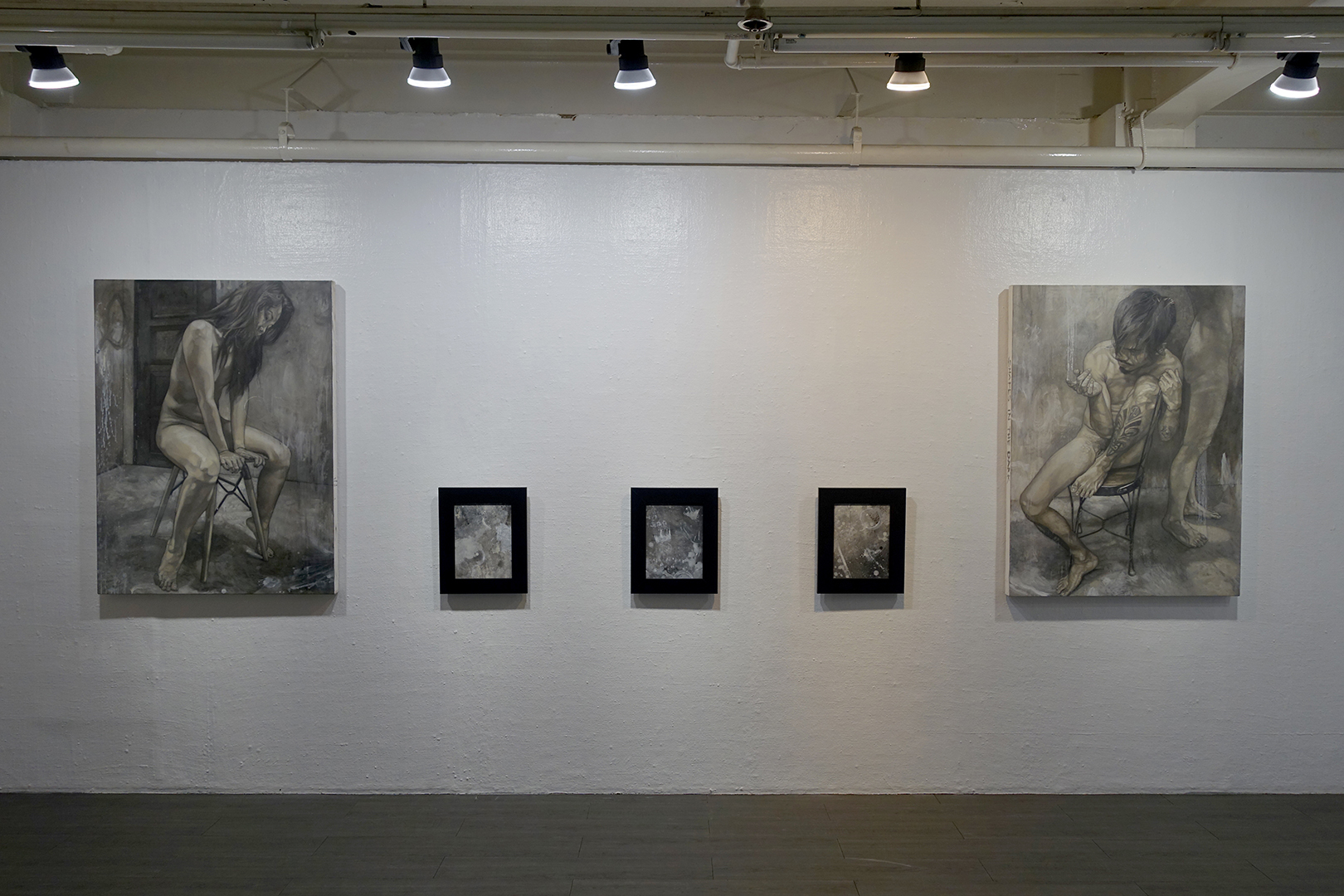 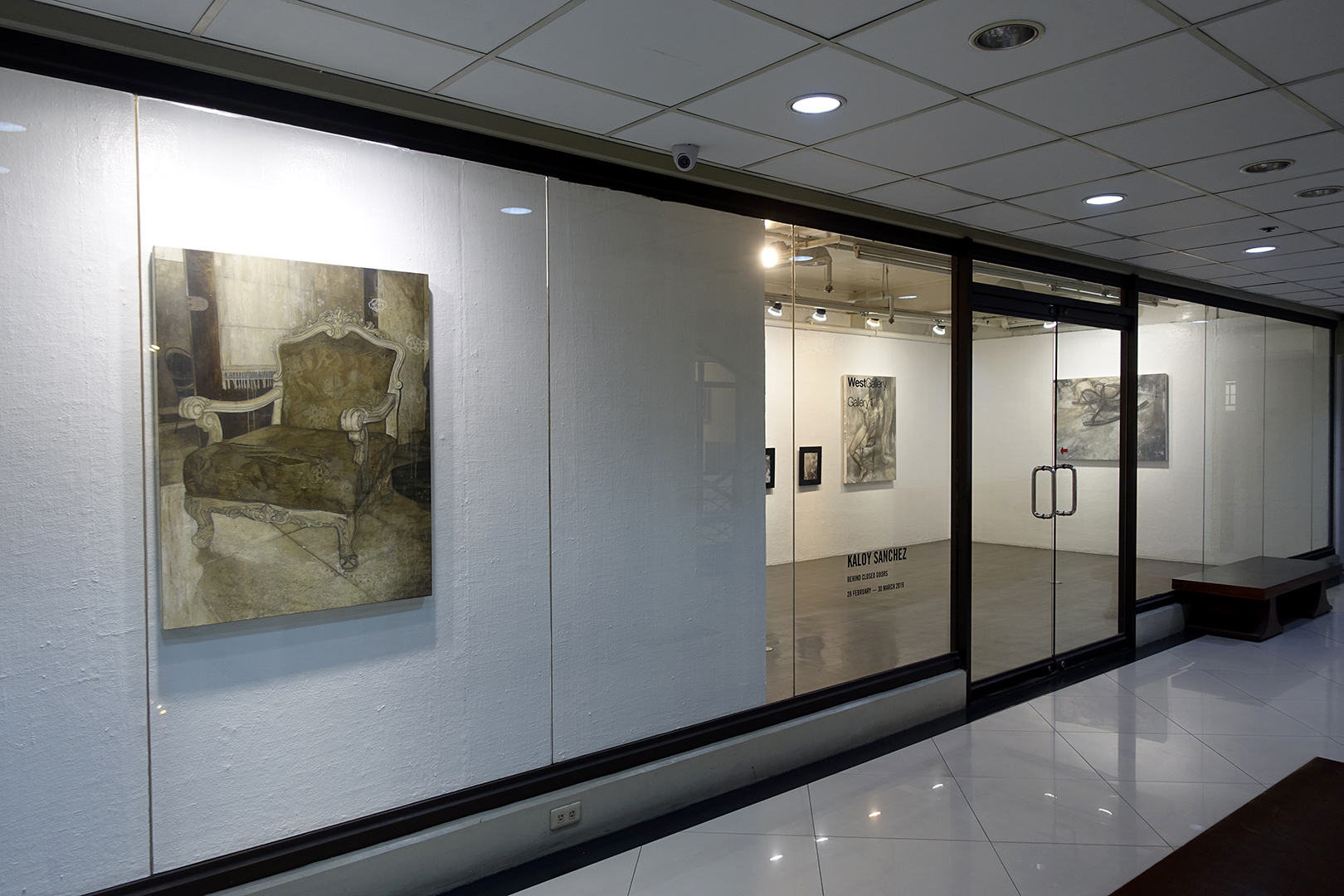 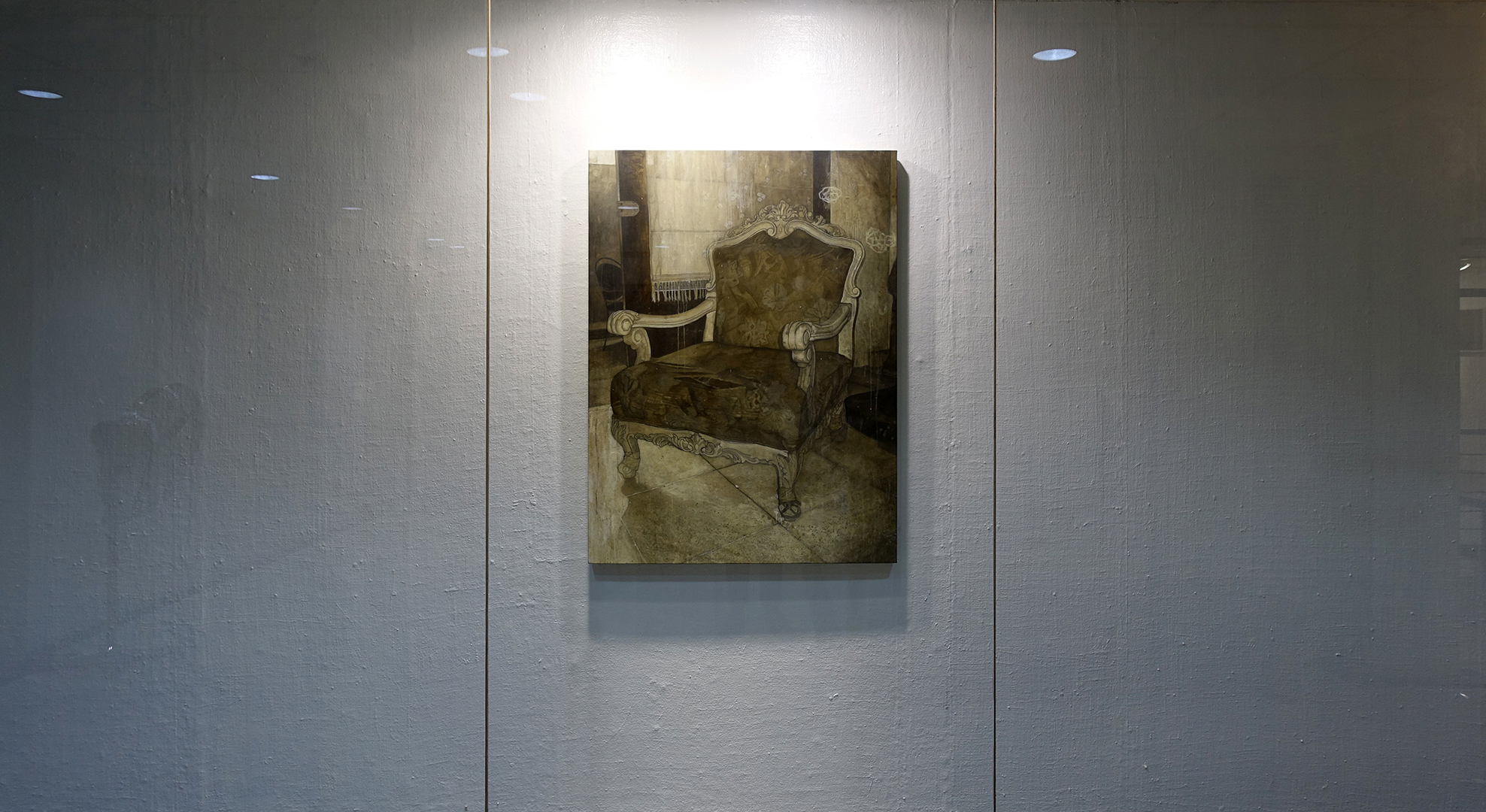