NEW WORD ORDER: Typescript as Sculpture as Painting,
Translations in Conceptual Continuity
In the advent of modern art, cross-pollination of artistic forms rampantly informed each other with works alluding to a song from a film from a book from another song. Following this logic, we can say that one form is constantly translated into another one, and into another one, and then again into another one. This kind of abstract reproduction of continuity figures in the art of Gino Bueza, with a wide array of motivations coming from John Steinbeck to Frank Zappa.

In linguistics, the process of translating words from one language to another is never an unadulterated task. It is inevitable that the target language, with which the work is translated to, is always different from the source language from where the text was originally formed. Materiality, cultural nuances, locality in context, and the translator himself intervene with the process of translation, inevitably producing a kind of modification or a careful type of transformation. The deficiency permanently present in the translational process justifies the coinage “tradutorre, tradittori” which means “translator, traitor.” Translation then, as a procedure of defecting is always at work in all kinds of texts, which makes visual arts not an exemption to the rule.

Mainly influenced by the conceptual works of 1960s, Bueza’s “Systems of Control” attempts to render the primacy of typescript in conceptual art as a substance to his paintings, merged with the materials of pop art as a decamping of conceptualism’s own definitions. Working on the provision of typescript as a sculptural occurrence, as in most conceptual works, he wreaks havoc of his own art’s arrival by highlighting the process of reconstruction in painting. Works such as “Done with Order”, “Text as Form” and “Legwork 1 & 2” strongly reinforce this havoc, appearing to be soft distortions of its own meaning-making.

Visual distortions dominate most of Bueza’s works, which reflects the linguistic distortions he wants to pursue. The seemingly unprocessed and misconfigured semblance of “Joy in Bundles” and the three versions of “Spread as thin as can be”, all carrying the brands Ligo, Surf and Tide, are altered to a form of chaos reminiscent of commercial symbols. The brands are not printed on paper, but the prominence of the words “thin”, “can” and “spread” as replacements of the logos initiate a kind of re-reading; that against the familiarity of the image is a breaking of semantic structures. Here, Bueza shows his loyalty to translation as an act of treachery with words and with meaning. The appearance of these paintings is clearly governed by the character of its materials—capitalism associated with overproduction associated with repetition associated with pop art—hence the use of silkscreen in his paintings. But against this disparaging network of associations, the rhythmic disarray and the impression of lawlessness in these pieces, an entirely different meaning is shaped and produced. A new word order is born: joy as in happiness, tide as in waves, surf as in riding the surface of waves and even the word “ligo” in Filipino which means cleansing, altogether creates a new world of representation.

Bueza’s awareness of his own reconstructive task is also evident in “At The Same Moment” and “My many colored objects placed side by side to form a row of many colored objects” as he tried to convert to painting the conceptual works of Lawrence Weiner. Lifting both titles directly from Weiner’s works, Bueza in his transformative project becomes attentive and mindful of the meta. In the former, the word “offsides” are consequently painted on the off sides of the diptych while the literal composition of the latter produces a procedural effect that is very conceptualist in nature. It is in these works that Bueza yet again expresses his fidelity to translation as he admits the impossibility of a 1:1 correspondence in translating art forms, thus creating a new work from past forms, materials, and ideas.

By deciphering both the linguistic and artistic codes of “Systems of Control”, it becomes clear that Bueza’s works not only present the breaking of images, disturbance of textual arrangements and transgressions of capitalist symbols. His works are not merely juvenile and stagnant translational critiques of old forms. Instead, they are transformative, even progressive. Bueza’s works are hopeful not of the romantic, starry-eyed and quixotic affinity, but of the honest and truthful kind. He reveals the scraps of the current system and the deceitfulness of existing structures, but he is also active in ingeniously creating a new possibility, a new order of things. # 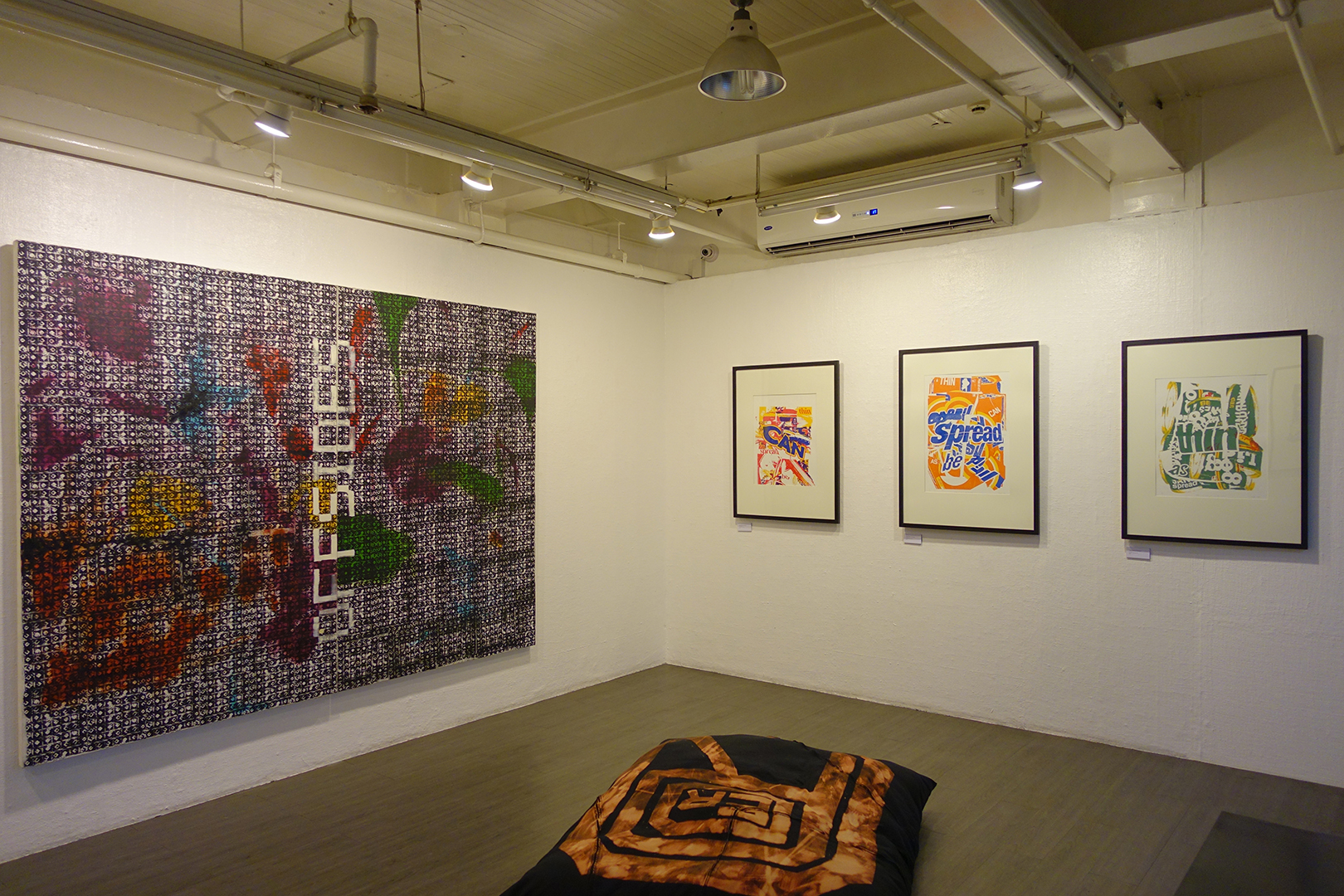 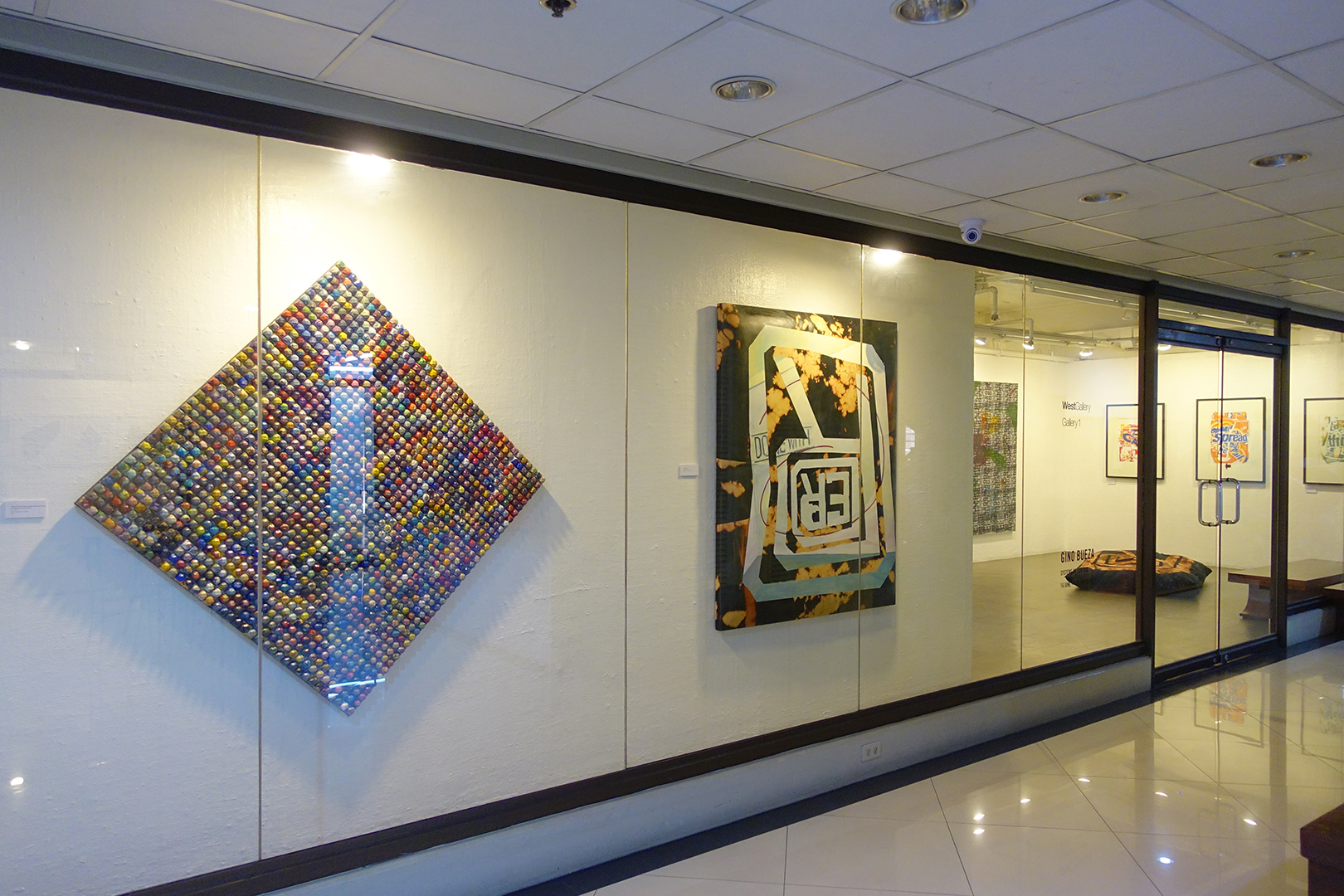