The Past as an Unknowable Landscape

In The Past as an Unknowable Landscape, Luis Antonio Santos places value in the archive, and there exists no one version of the truth. What we know to be true has already been constructed and diluted for us — a distortion of the original meaning, purpose or context, skewed towards the story that systems in power have decided to be the truth. Through time, funneled through the hands that handle history, the world as it is known exists in distortions upon distortions. Although we are living in the time with arguably the most access to the most information, there is a loss of viable information, due to this deliberate framing. Here, Santos investigates the act of remembering as a way of going back into the past, an archaeological excavation of what constitutes our collective history. Through renditions of digital media’s virtual representations of the past, Santos transforms these pixelated spaces into tangible objects that carry no single meaning.

“Form” is a series of oil paintings that were made by photographing canvases draped over frames, instead of stretched out, the covering and obscuring being the subject of the works. These draped paintings present a tension, the dichotomy and pairings of two different ideas, of being and nothing. The form of the paintings takes the shape of the canvas, which through Santos’ process, has rendered it both form and void. These shapes and figures are based on the parts of the studio where the silkscreen works were made, a siting of these processes, made tangible in another work.

Although the “Form” series are the main works in The Past as an Unknowable Landscape — oil paintings rendered in eerie detail, for which he is known for — it also marks a continued departure from the more traditionalist forms that Santos began with. Here, and for the rest of this new collection of works, the distinctions between painting, photography, and printing are visited, considered, made ambiguous.

The works in this show represent the tenuous connections present in the personal and the collective, the varied meanings of what “the truth” is and can be. With a marked interest in objects as vessels for history and information, his work takes on a life that is constantly hinged on and remade by the meanings that are imbued in these chosen vessels. These objects and images are allusions to the wide variety of Filipino histories across the archipelago, and the collective memories that together shape its heritage. There are constant negotiations between past and present, between the collective and individual, which alters through each individual filter. Each vessel contains a multitude of meanings and associations, loaded with possibilities and meanings, changed according to who sees them.

Some of the “Fragmentation” pieces present as domestic shrines, the shelves adorned much like home altars, both points of reverence and innocuous sights in Filipino homes. These altars are the culmination of colonization and our pre-colonial past, a nod to folk Catholicism, which still pervades our culture today, in which the nation’s identity is rooted in a version of Catholicism that inherited some rituals and beliefs of its ancestors.

Thus, Santos explores the notion of distortion as history. The way information is processed, including misreading and misunderstanding, is partly hinged on personal intake, and dictates what version is then passed on. These personal readings are compounded over time, and so “distorted” history informs the present. The altars are objects that contain this history, with the distortions passed down and diluted over the generations.

Santos’ altar pieces also signal towards the importance of ritual in cultural history, surrounded with candleholders, a decanter, garlands of sampaguita, objects that play a part in offerings, where something tangible is exchanged for something that’s not.

These series of printed works also respond to this idea of collectivity and individuation. In the “Index” series, the jungle screens, which are constituted of three images — one of which is a stock image purchased by Santos, and two photographs taken by himself — look into the tension of opposites again. Here, Santos adds and subtracts to the final image, with a goal of filling the void using commercially available and standard paper sizes. The continued layering and obstruction results in an obfuscation of the final image, which remains recognizably a jungle, but perhaps a terrain that is even harder to navigate.

These pieces are made with a set of rules and constraints, with a loose equation as a formula for their composition. Santos’s process for these pieces deal with both marking and erasure, where space is claimed and negated by what is imprinted and what is removed. In “Partitions,” he makes the work — an oil painting — about his process of making his silkscreen work.

Within the work are the screens with images of altarpieces, seen in reverse, the image and the object distorted by fire and bleach. The frames used in these works are frames discarded from other works, rendering them vessels for other ones. “Window” is a work of enamel and oil on canvas, losing some of the function of sampaguita glass, but also copying it. The original glass is decorative, but serves the function to hide what is visible, other than light. In “Window,” nothing is visible except for the pattern of the glass, and the darkness it fails to obscure.

In “Where does a body end?”, Santos installs burlap sacks on one of the gallery’s walls. These sacks were used to line the gallery’s walls, prior to its renovations in 2019. It occupies the same space, but has lost the function that it’s replacement lining has adopted. Instead, it has become an object that contains the gallery’s and his family’s intertwined histories. After each exhibition, the marks are erased and added upon, though still containing traces of what had been there, a signification of both absence and presence at the same time. It explores the notion of time and space existing in one material, where the accumulated layers of paint signify the passage of time.

There is an overarching element of distortion as memory, and as history, in The Past as an Unknowable Landscape, where the truth evades recollection each time it is remembered or retold. It speaks on the fragility of memory, and how one creates more distance between himself and the actual memory each time it is remembered. A photograph captures loss the moment it captures an image. The act of preservation, when pressing the shutter, immediately becomes an act of forgetting, where the lived moment caught on celluloid is exchanged for the actual passing moment. Santos interrogates the tensions between what can be perceived as opposing forces or ideas, through the work and his processes, situating this collection of work in the spaces these tensions occupy. We are reminded that marking and erasure, remembering and forgetting, these things happen can together, all at once. 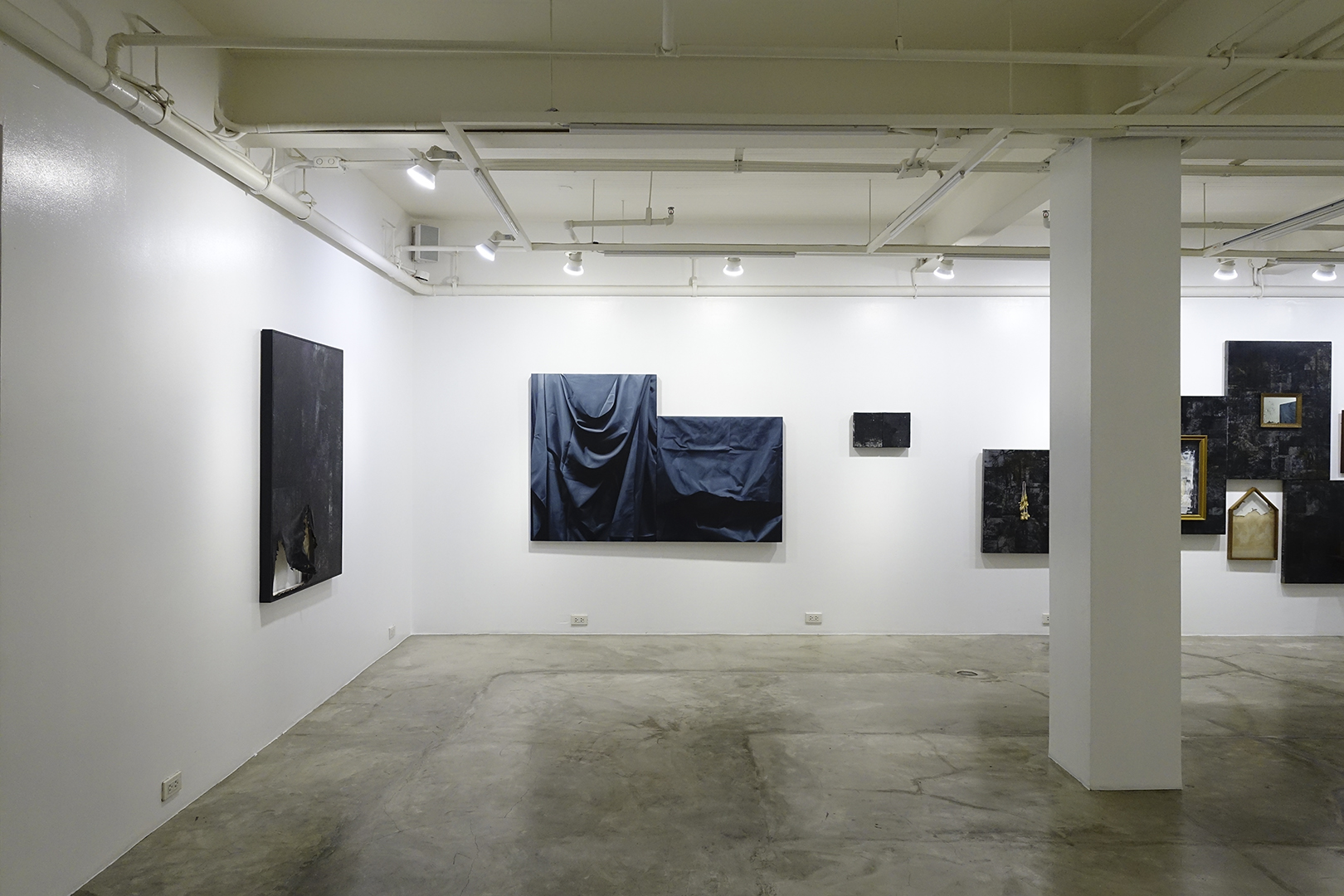 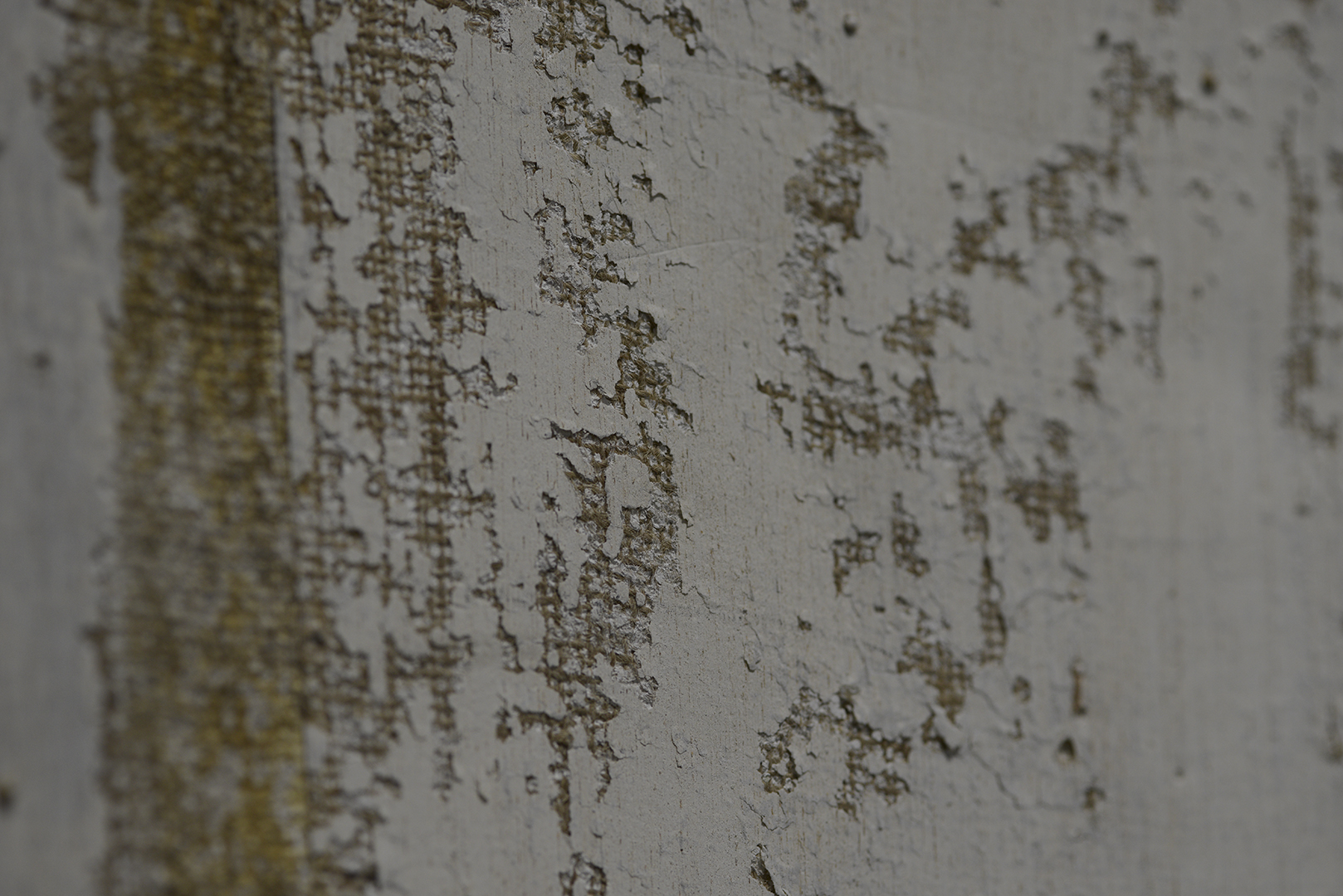 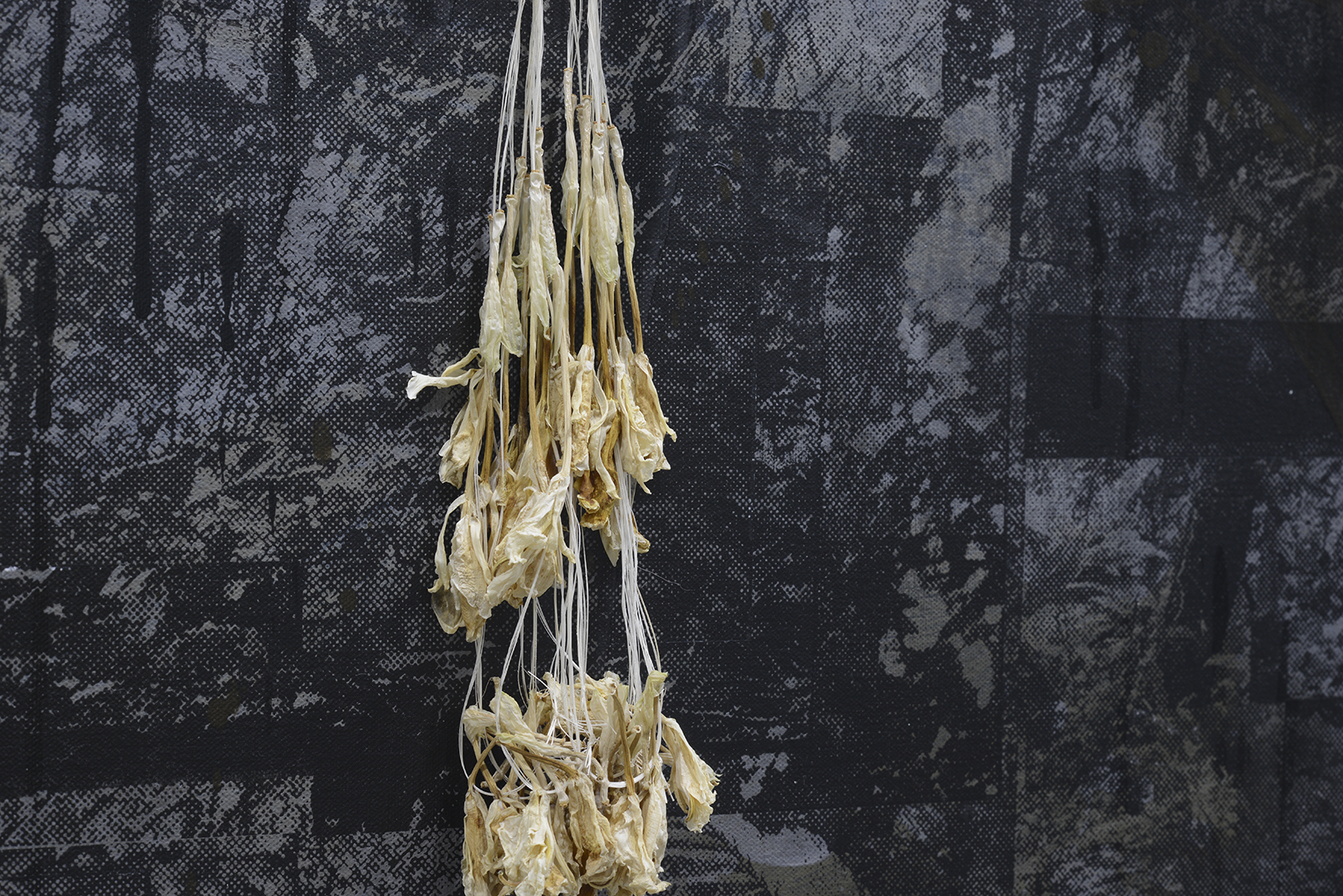 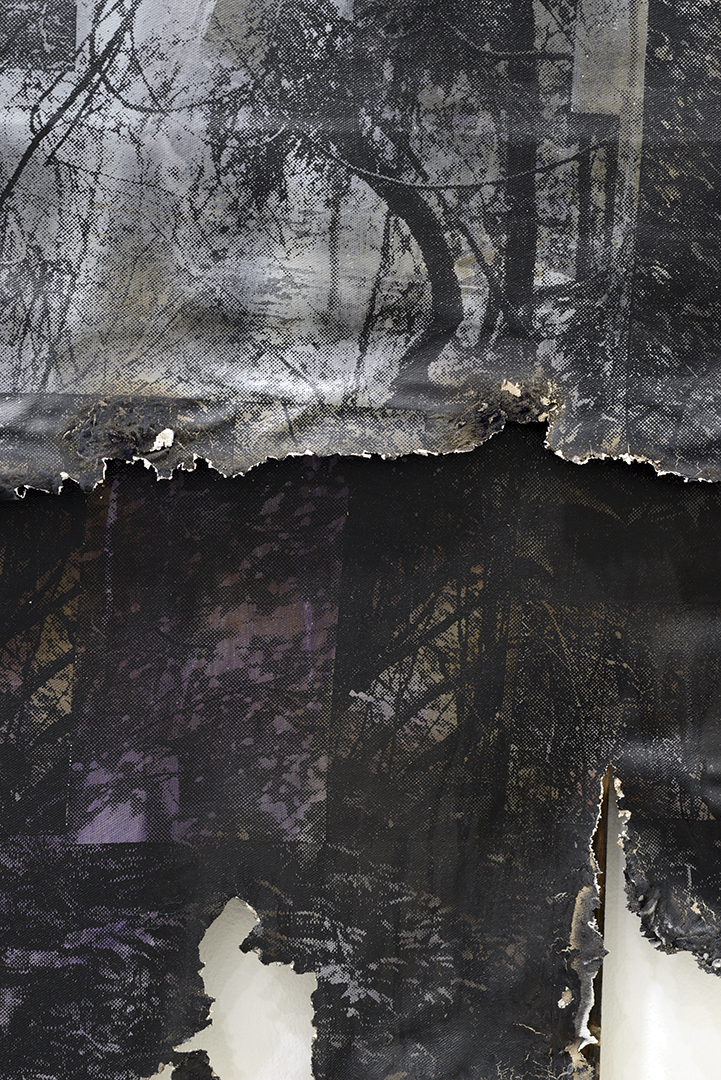 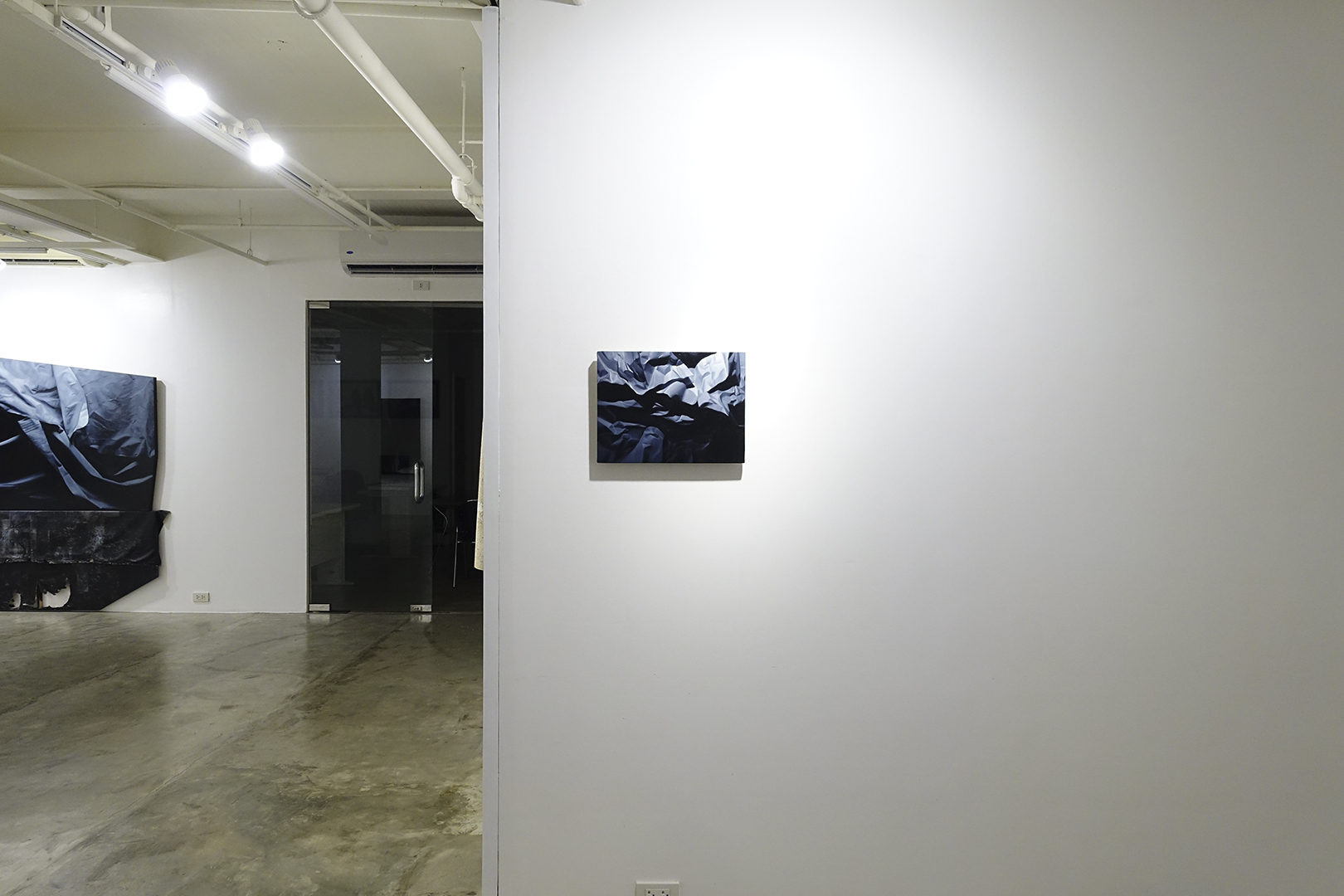 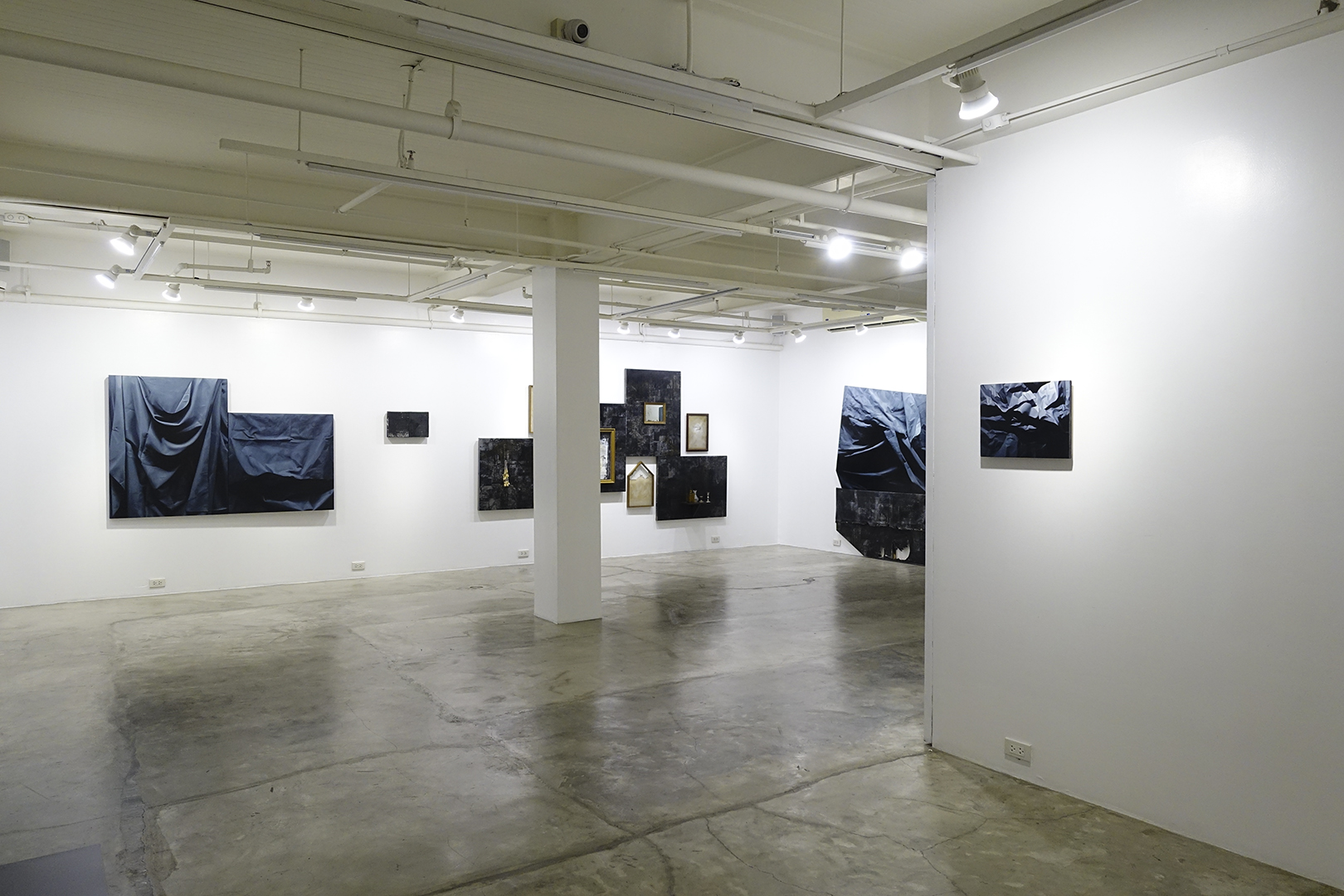 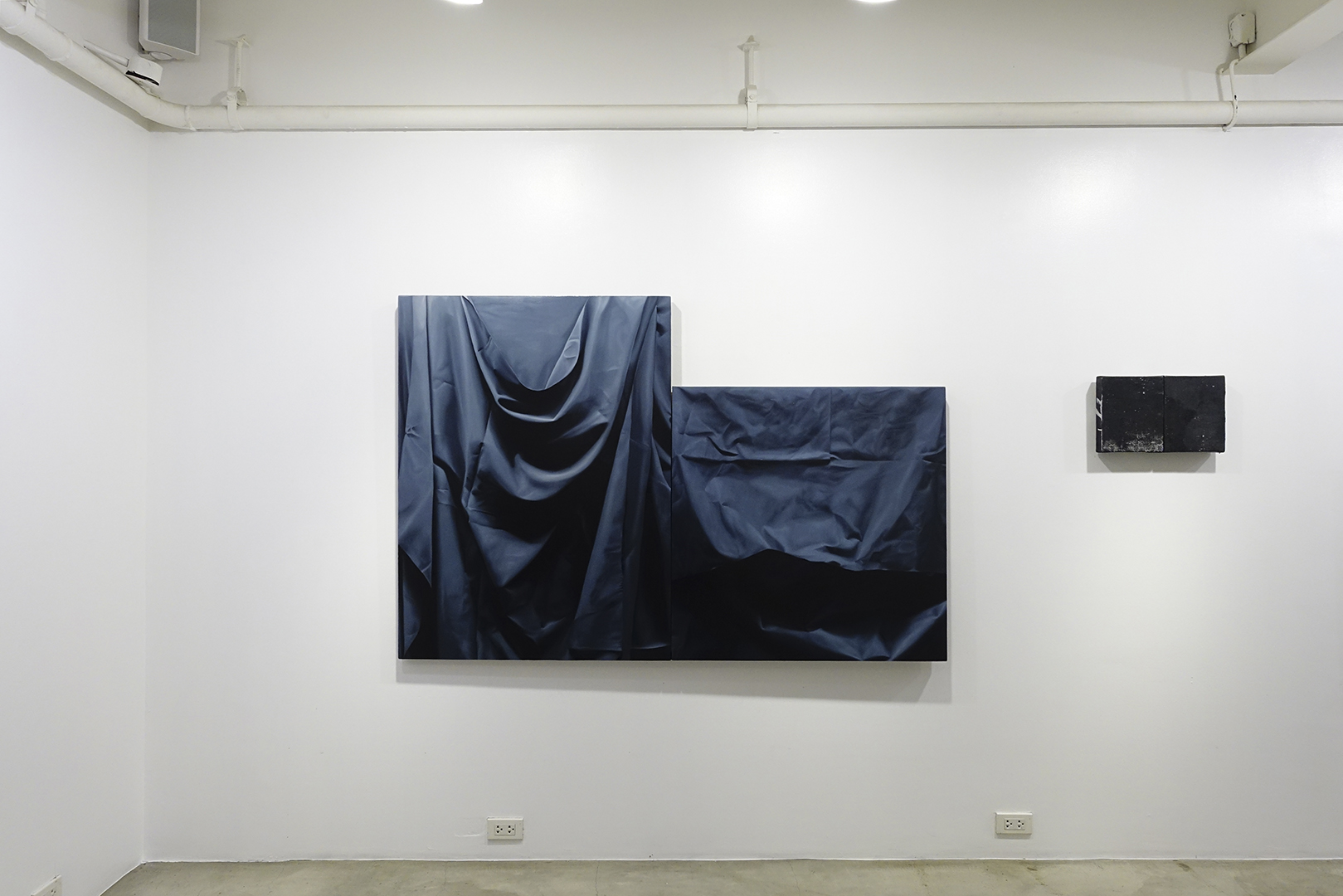 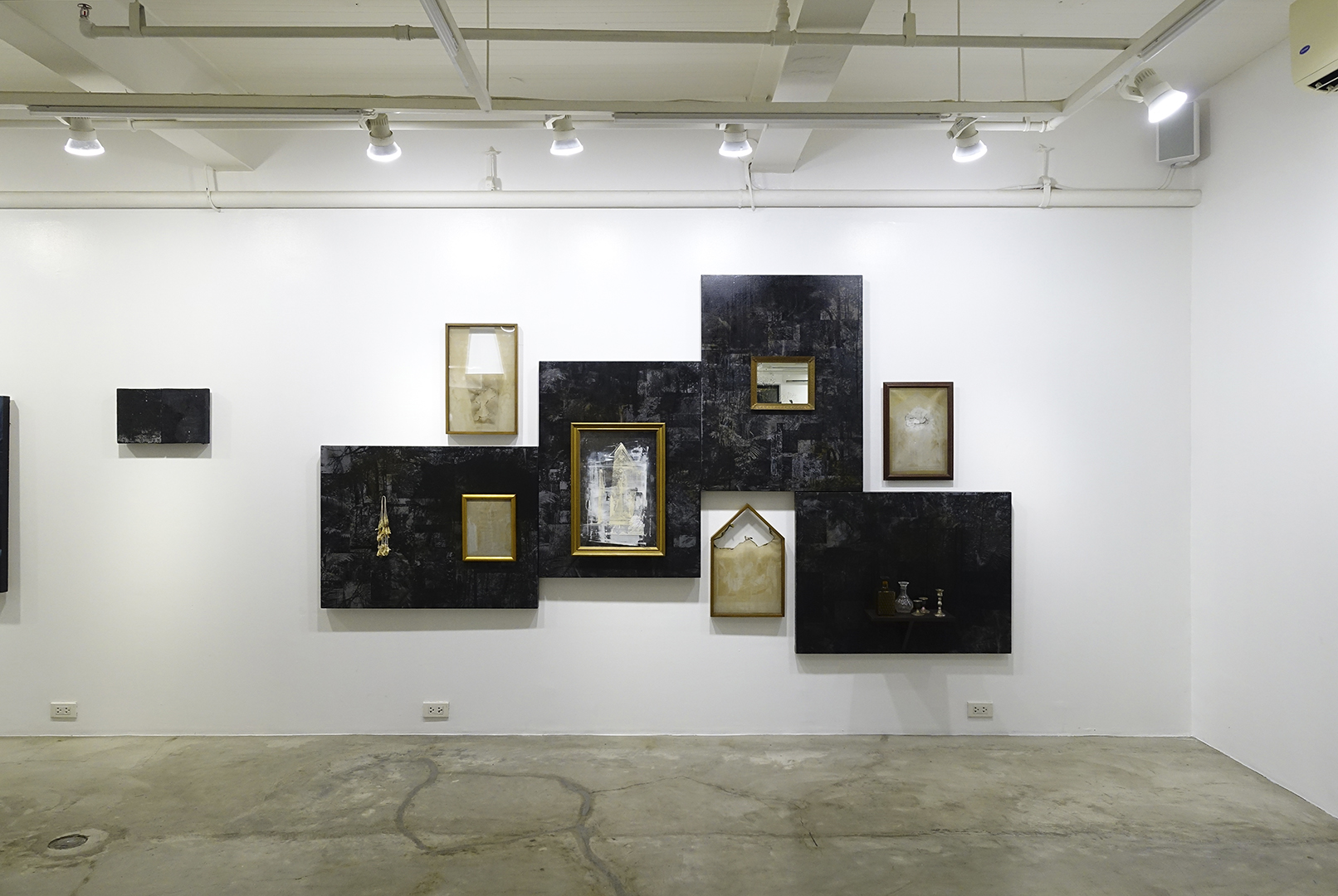