On the Roll, That's a Wrap

At the center of Gino Bueza’s latest exhibit, titled, On the Roll, That’s a Wrap, are the concepts of duplicity and familiarity. Bueza’s new works explore double meanings, examining how words and images alter or distort those definitions through certain texts, familiar objects, and random images. The exhibit aims to invoke an alternative manner of presenting (or projecting) ideas by using visual clues that people are familiar with, emphasizing contrast between opposites. “Each opposing idea supports the other’s existence,” says Bueza.

Using acrylic, Bueza is fascinated at the abilities of the material to create value and to physically transform throughout the creative process. “I [have] always wanted to portray objects in a painterly manner, and to express them literally.” One piece, “Almost a Wall Painting,” suggests the text, “PAINT,” though the composition stresses the word, “PAIN,” as it describes the acrylic paint, referring to the painstaking manner involved in mixing paint, as well as the painful journey of painting as a whole.

Then, there is “When Great Rulers Came to Conquer,” which uses an image of a “saw” (a wood-cutting tool). Inspired by the famous Alexander the Great line, “I came, I saw, I conquer,” meter sticks were then utilized to suggest another meaning of “rulers” (as leaders).

The “Holy Grail!” series, on the other hand, shows random images on a torn painting with an ambiguous form of two faces and a vase, which, in this case, is a chalice. Beneath these images is a set of bottled beverages (“The Table of Contents”), supporting the idea of what is usually put on a chalice (such as wine) can also change. Such visual clues broaden the perspective of familiar objects/ideas, paving the way for two or even more meanings or interpretations. Bueza, for his part, vows to probe further in his succeeding works. 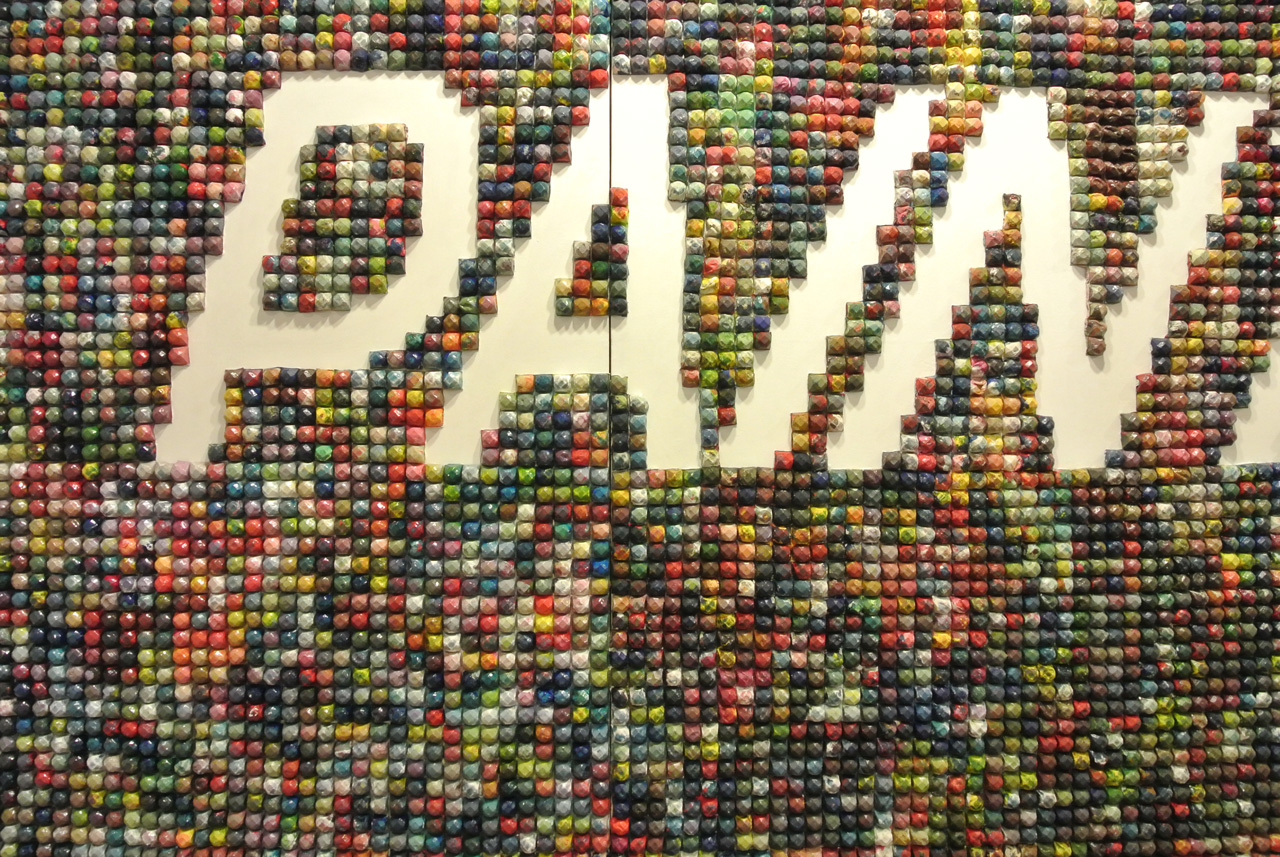 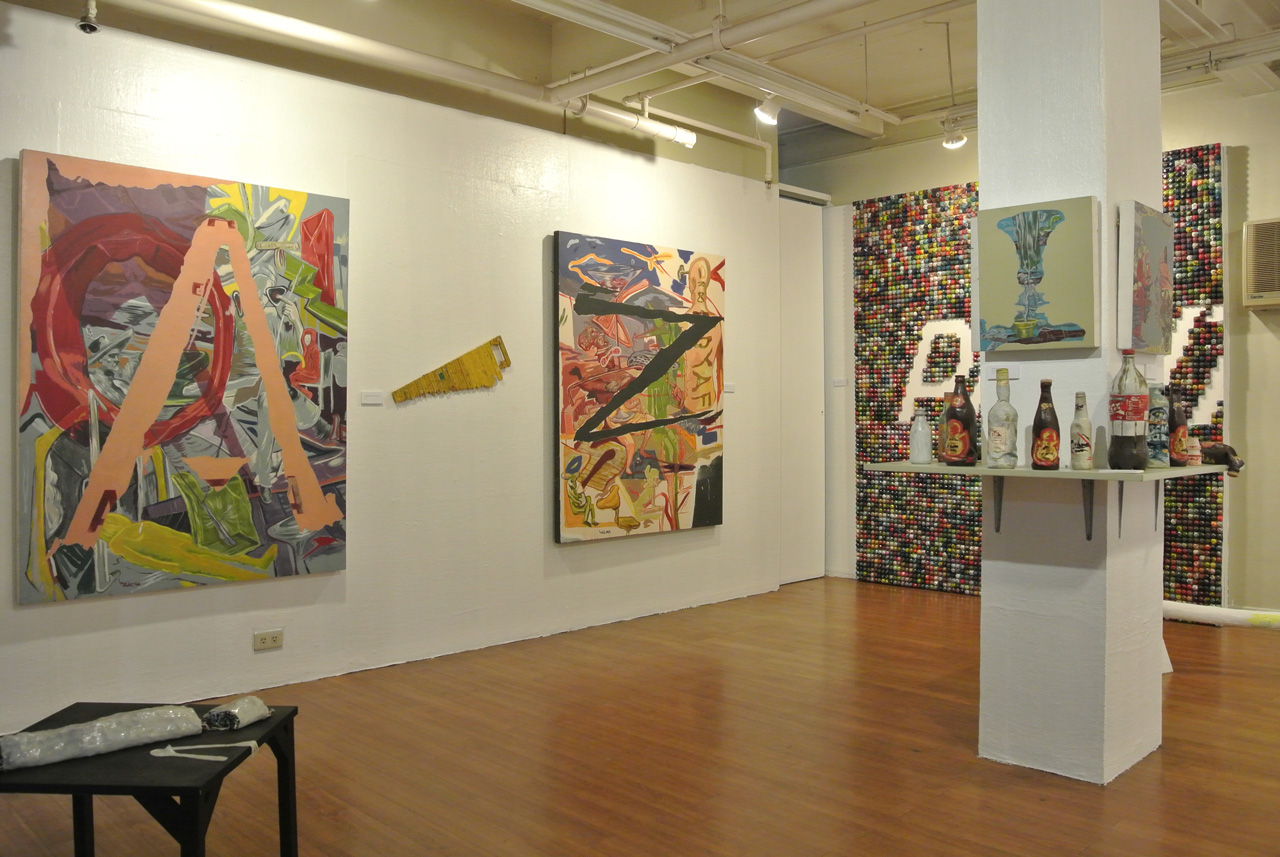 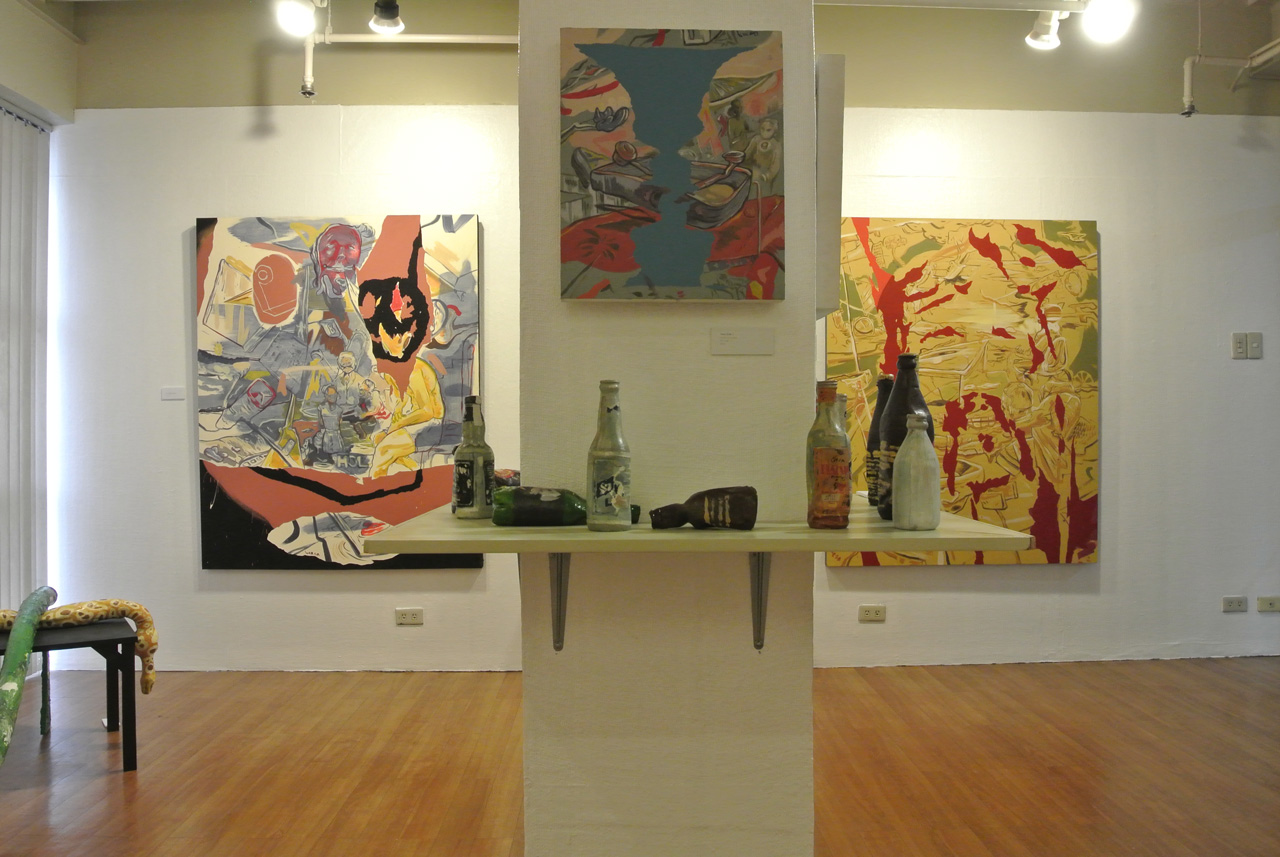 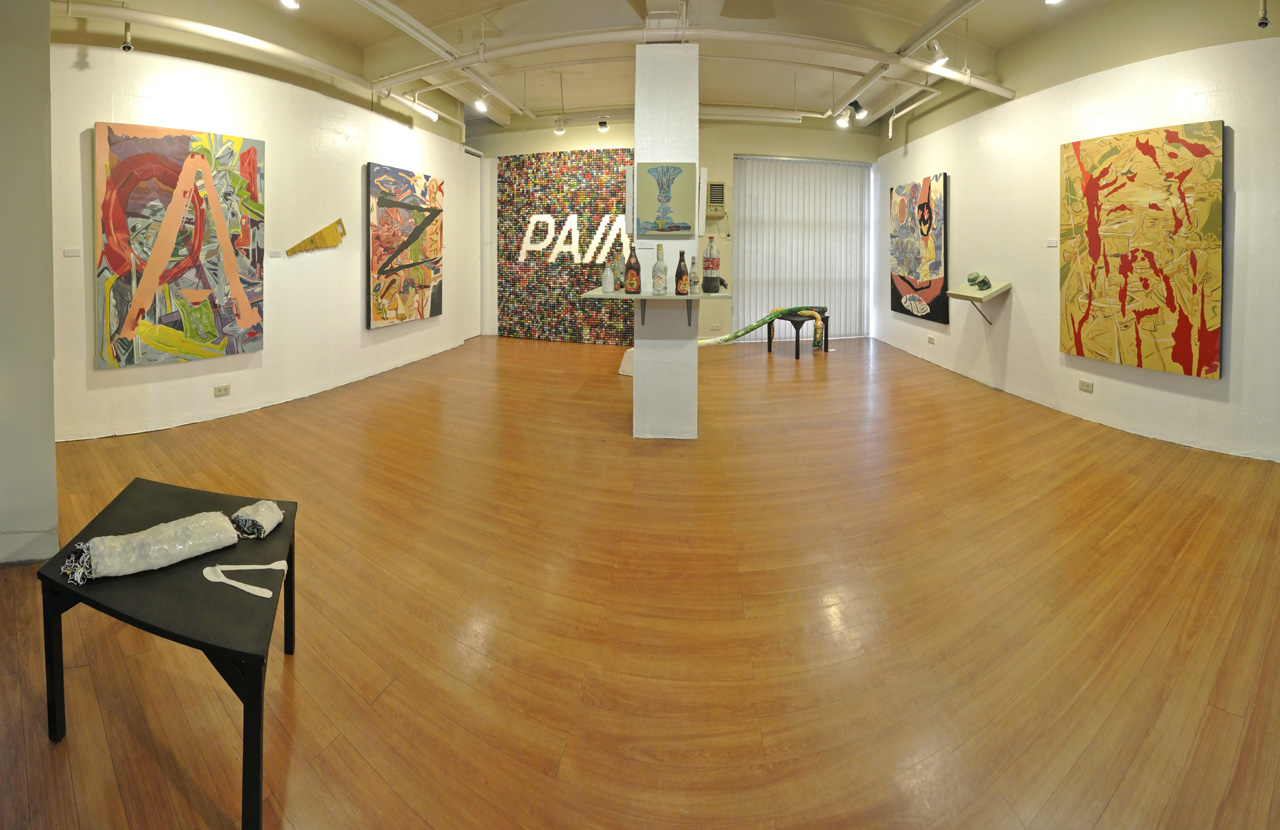 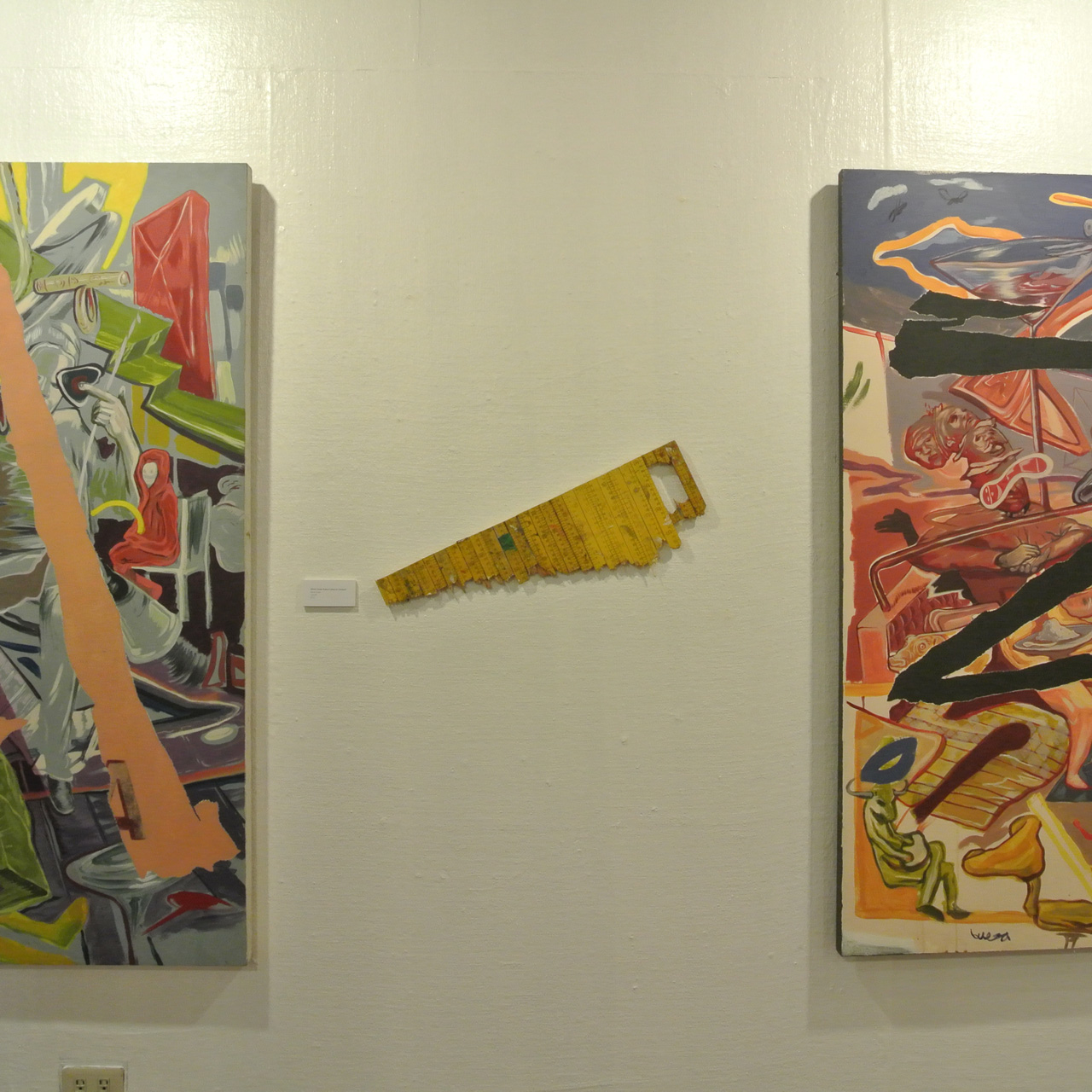 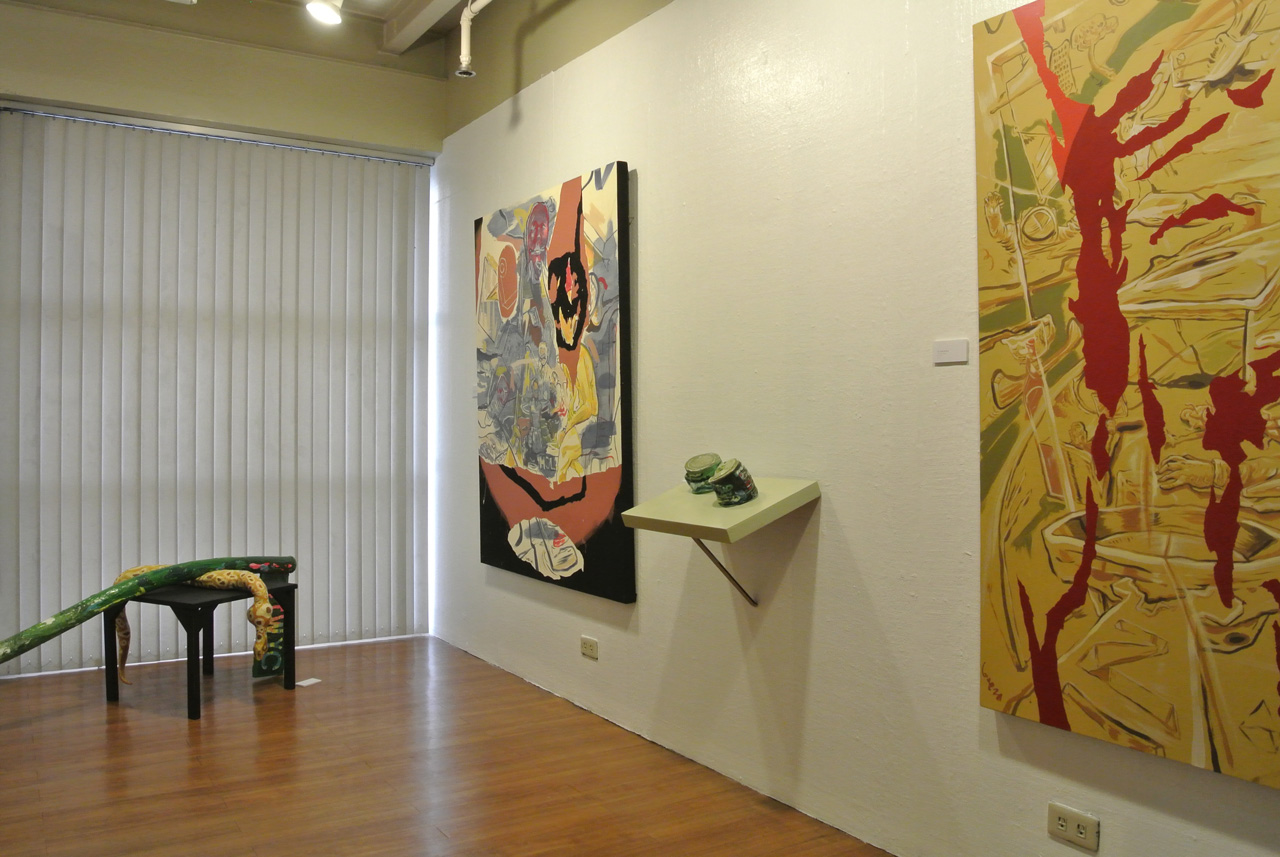 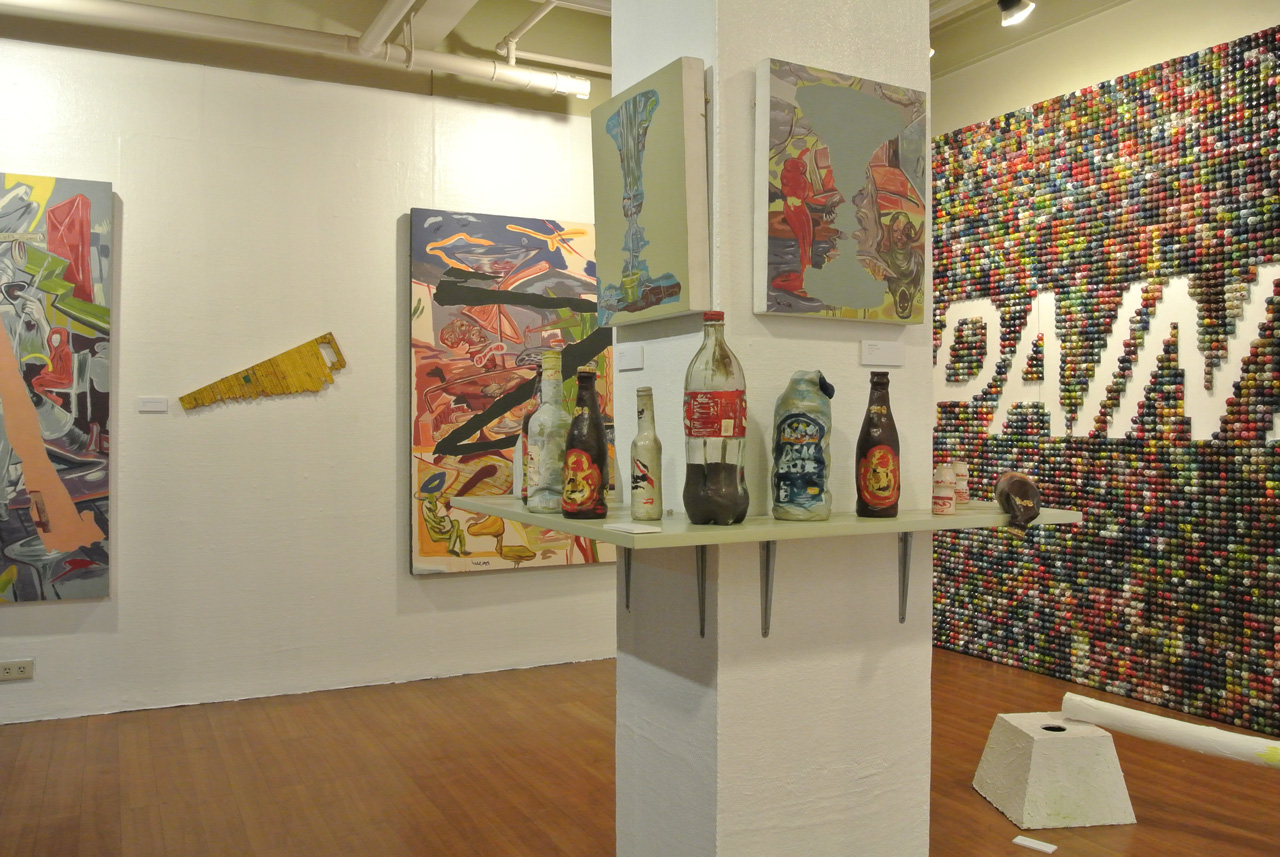 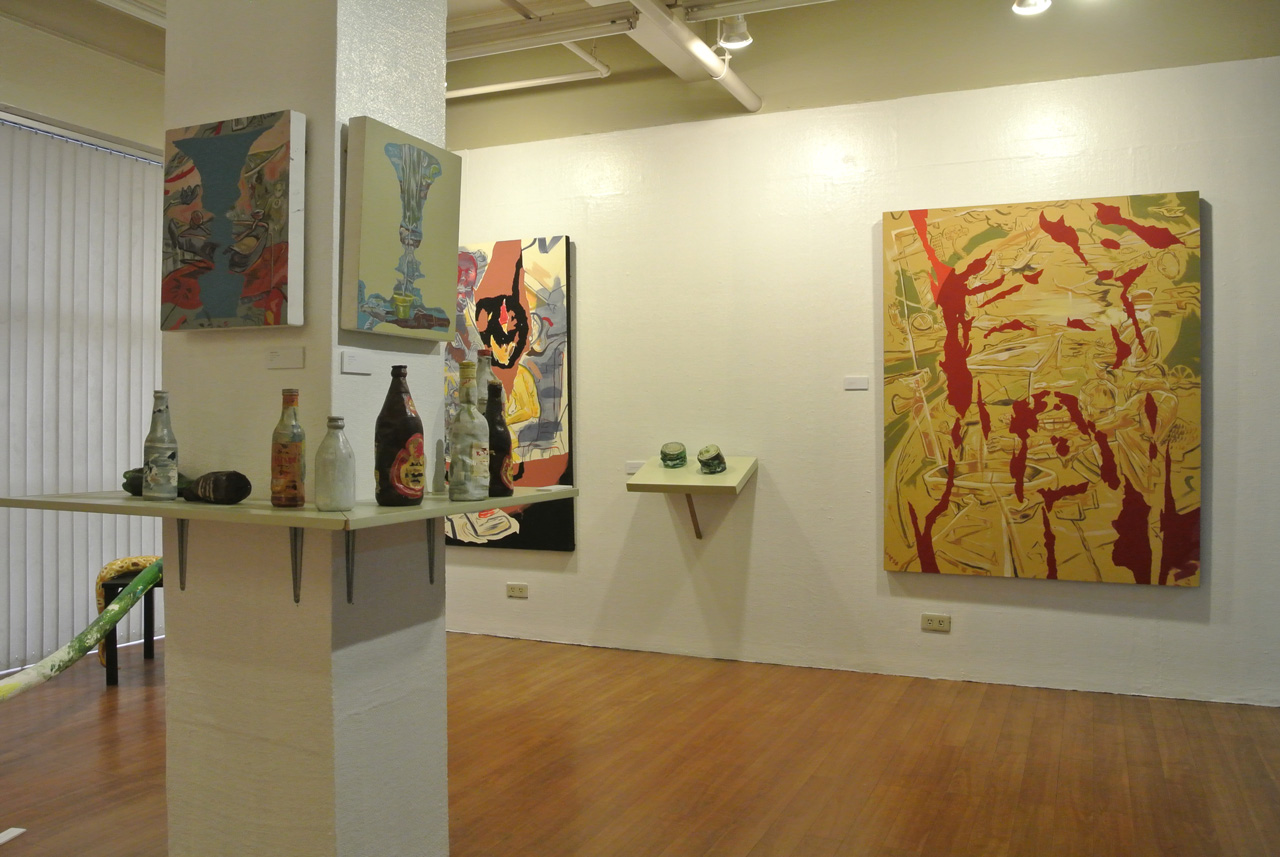 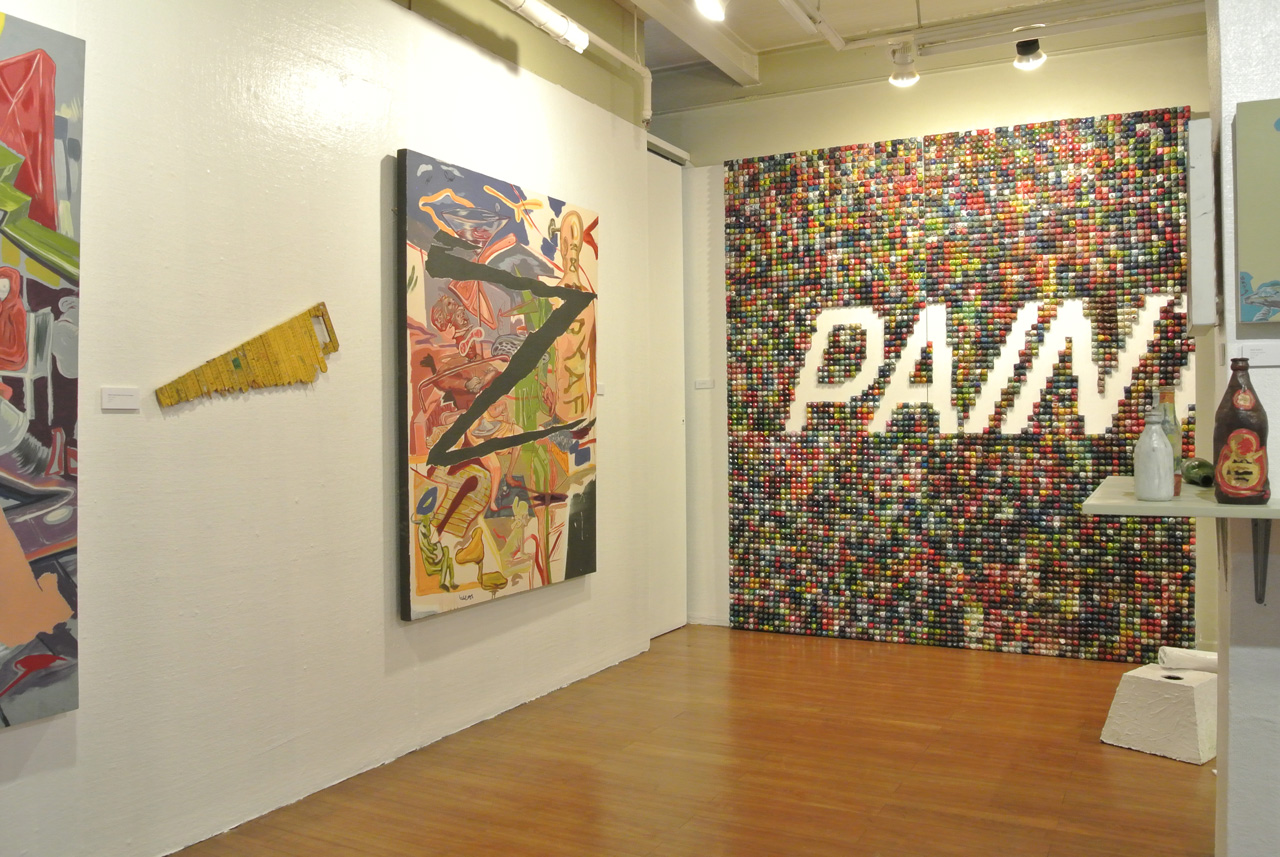 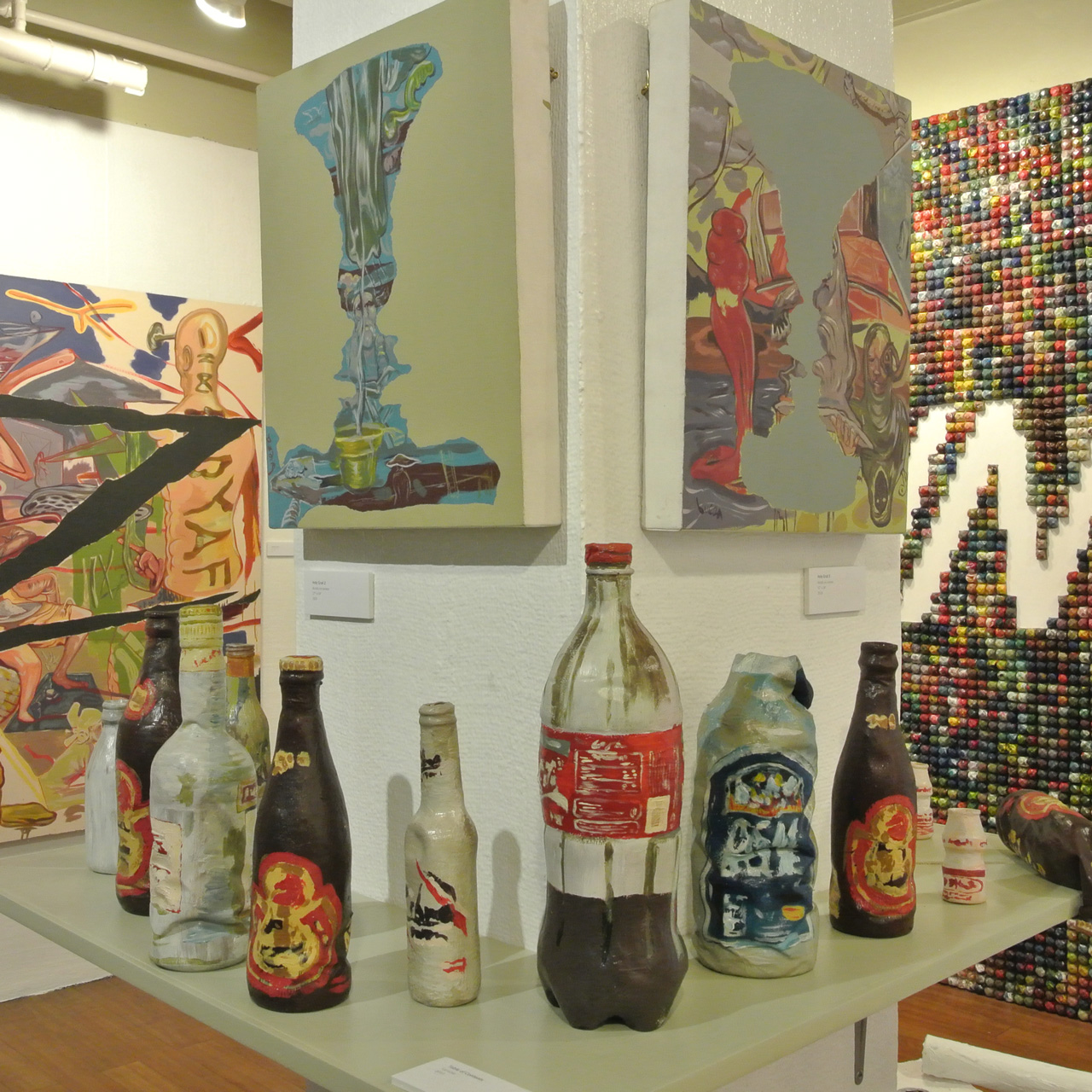 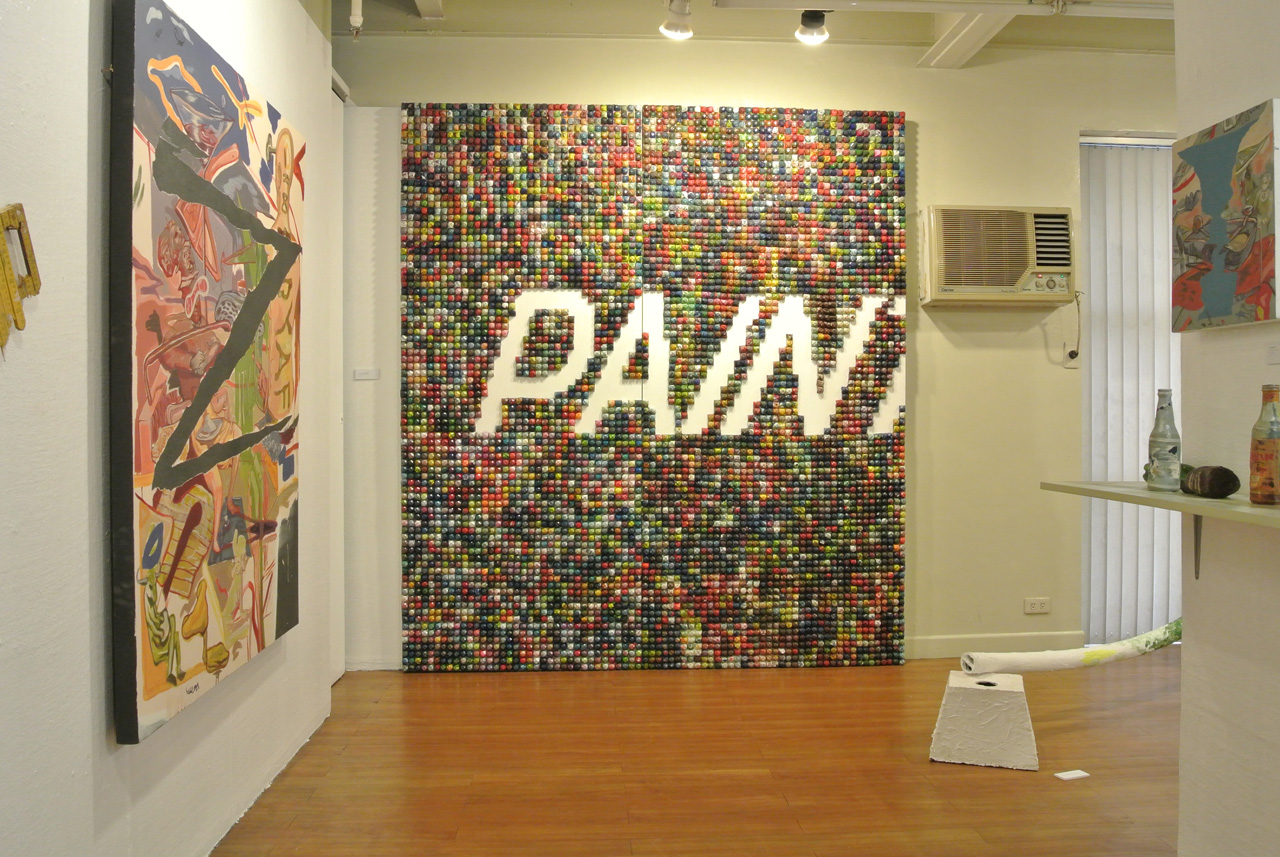