Muscle Memory Amnesia at the West Gallery features a group of new generation abstractionists with their most recent works. The freedom, pitfalls, and provocations from the style that defined the Modern movement are incorporated into the new dynamic of art practices held by a younger breed of Filipino painters. The incorporation leads to further explorations of the form: the material, the pigment, the motif, theme, and overall mood are explored by four different artists who have continued to develop the autonomy of painting against the world of signs and symbols.

Jigger Cruz, Don Dalmacio, Neil Dela Cruz, and Beejay Esber all contribute to the distinct style of the kind of abstraction the younger generation of artists are pursuing. Compiling their works together in the gallery gives the audience a collective view of the possibilities, as well as a good grasp on the different configurations of the style once dubbed as the end-all of painting.

Jigger Cruz, who has become the region’s new ‘enfant terrible’ for the ‘strategic’ use of abstraction in order to redefine the conditions of painting, first, unshackles himself from the limitations of the canvas’s flatness. For Jigger Cruz, the frame does not serve as a window to see the world, but a booth to stage the shattering of notions about paintings. His prominent pieces have been attempts to deconstruct the aura of genre paintings, as he paints over classical tropes of landscape and portraiture with his signature splaying of thick pigments and wild, multicolored lines. In his works for the show, he lifts these instruments of defacement and places them as the centerpiece in his canvas.

In Don Dalmacio’s works, the abstract oeuvre comes out as residues from the visible world. The often dark, minimalist blotches of solid shapes and lines appear to be extracted from the shadows of familiar interiors and objects. The dim nature of his works becomes an interplay between reality and imagination, and becomes a bout between the mind’s associations with the real world and the solipsistic nature of pure abstraction.

Neil Dela Cruz’s oil paintings, on the other hand, are reminiscent of the constructivist’s exploration of geometric forms, except his canvas is pervaded with a kind of looseness—a fluidity that puts together the colors, lines, and shapes inside the frame toward a labyrinthine pursuit of an organic subject. The marriage between spontaneity and structure in Neil Dela Cruz’s works is apparent. The form that is transmitted between this interplay is a colorful maze that runs the distance between the subconscious and reason.

Beejay Esber puts a whole new dimension to his abstract pieces by incorporating found materials—cardboards, bubble wraps, holograms, and glittery paper. The solemnity (and purity) of the abstract form is undermined by Esber’s inclusion of common school and hobby materials inside the frame. Their combination with his similarly cartoonish and candy-coated acrylic paintings provides a light moment against the difficult nature of abstraction, and is a fresh outlook on the possibilities of painting and its relationship with the surface material.

Muscle Memory Amnesia, as a chorus of abstract forms, is a group rendition that highlights spontaneity, instinct, the subconscious, and the automaton in each hand and mind when it comes to treating the canvas as a world in its own—a world is beyond the figurative and the symbolic. The gestural and instinctual approach, associated with the inflections of the wrist of a painter which seem to take a mind of its own, a memory of its own—can also forget. And in forgetting, we benefit with the outcome of new possibilities in making art. 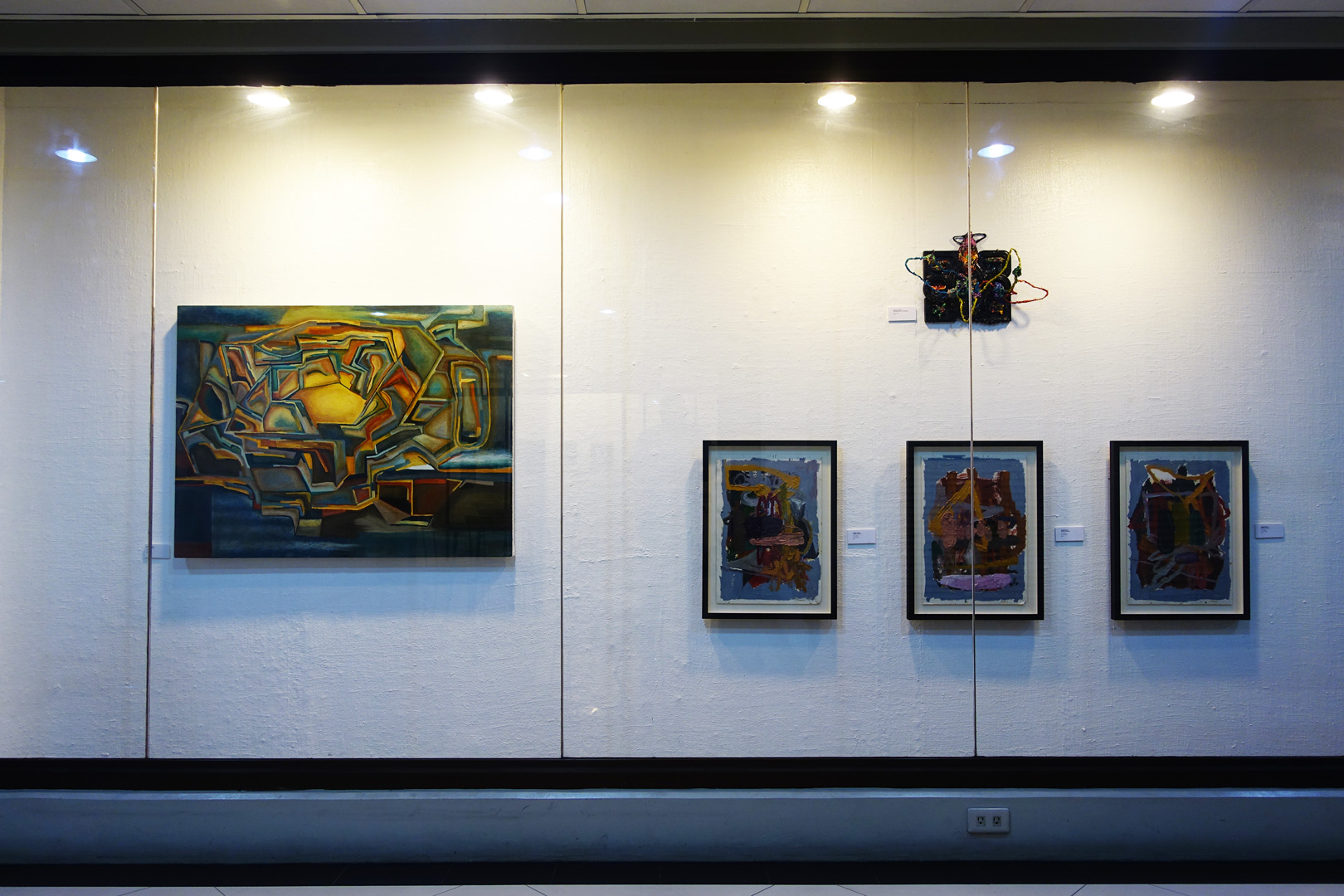