The Greatest Gun Show in the West

The age of Iron began many centuries ago, producing very beautiful objects – unfortunately, for the large part, guns. It is now high time this metal ceased to be a murderer and the simple instrument of overly mechanical science. Today, the door is wide open for this material to be, at last, forged and hammered by the peaceful hands of an artist.

As a young boy, Pete Jimenez cobbled together crude play guns with which, like many a pre-teen, he lived out fanciful episodes of bravery, combat and heroic but painless gunplay. By the time he was 35, he had learned to observe, appreciate and use real ones, technically still deadly, but pragmatically safe and rigorously regulated, in sport, as a dedicated practical shooter. In between these two stages in his life, he had seen guns and how they articulated a lexicon of protection, authoritative force, police power, brutal threat and, even, moments of ironic anxiety. This came as he contemplated these machines that worked with powder, metal and alloys and how they were instruments that idealistic youths in rites of activist passage came to associate with brutality, military suppression and threat to their inherent freedoms. While Lennon cheekily sang that ‘Happiness is a warm gun’, teens who listened to this found that they could inspire opposite feelings.

Jimenez is still a bricoleur, a very grown up version of that boy who hammered together make believe firearms, and has put a committedeffort into locating disused guns, decomissioned pistols, bullet shells and all manner of corroded residue from the use of this 1200 or so year old instrument of defense and aggression. He does this so that he might actually train a metonymic spotlight onto this device that he respects, studies, enjoys and yet regards with a tinge of anxietyand clear-headed scrutiny His show has a farcical title, where the word West toggles between this gallery we are in and the section of our globe, specifically the American section, the Wild West. There, gun emporia abound, almost in synch with gun-related massacres, these travesties triggered (pun intended) by forlorn, deludedly broken but still constitutionally enabled psychotics. His art looks at this extension of our ego, of our imagination, of our insecurities, and hopes to display readings on abusive policemen, solo-flightmaniacs, stifled protests, corrupted gendarmes and twisted investigators, all wielding guns in manners that do not necessarily augment human civility.

Guns are extensions of human will, therefore articulate human spirit, acceptable or not. They have been depicted in art since they were invented, although early on, in Ottoman, European and American Civil war imagery, they were trumpetted with more militaristicidealism and patriotic fervor. Francisco Goya’s The Third of May, 1808, painted 1814-15, dramatised their fascistic potential. Picasso did a remake of Goya, Massacre in Korea in 1951. Botong Francisco immortalised both execution by musketry and guns as means to independence. Presently, we find that Pete Jimenez is not alone in wielding this poignant but problematic medium/metaphor.

In 2008, Pedro Reyes of Mexico collected 1527 decomissioned pistols and rifles and melted them down to make dozens of shovels, titled Palas por Pistolas, the better to plant life-giving trees and crops. In 2012, he again took what he could collect and repurposed them into musical instruments. In 1983, with equals hint of indifference and irony, Andy Warhol made an entire serigraph portfolio of revolvers. Cornelia Parker, famous for Cold Dark Matter, where, with the help of the Royal Army she displayed the suspended, exploded fragments of a garden shed, exhibited the cut up parts of a decomissioned carbine. Robert Longo did BodyHammer in 1993, doing meticulously detailed large charcoal drawings of handguns pointing directly at the viewer, simulating aconfrontation with this mortal threat. Luxembourgian Carl Freidrich Reutersward’s mammoth .357 magnum with its knotted barrel was a gift, now a fixture since 1988 at the United Nations compound in New York. Reutersward, a friend of John Lennon, did this work to denounce Lennon’s death by pistol. Goncalo Mabunda featured in the 2015 Venice Biennale with his thrones made of guns and projectiles, his grisly record of 16 years of civil war in his native Mozambique. Canadians Sandra Bromley and Wallis Kendall gathered more than 7 tons of disused firearms and made the really massive The Art of Peacemaking, a walk-in cube of sorts welded together with all this weaponry. There are dozens more; we don’t intend to reprise the full inventory. We will end here by saying that Pete Jimenez’s current display, linked to his previous shows of 2017 and 2019, meditates on an invention that humans felt was needed, yet in a twisted maze of attitudes, may be one that threatens their peaceful coexistence, wherever they opt to make a go of this. END 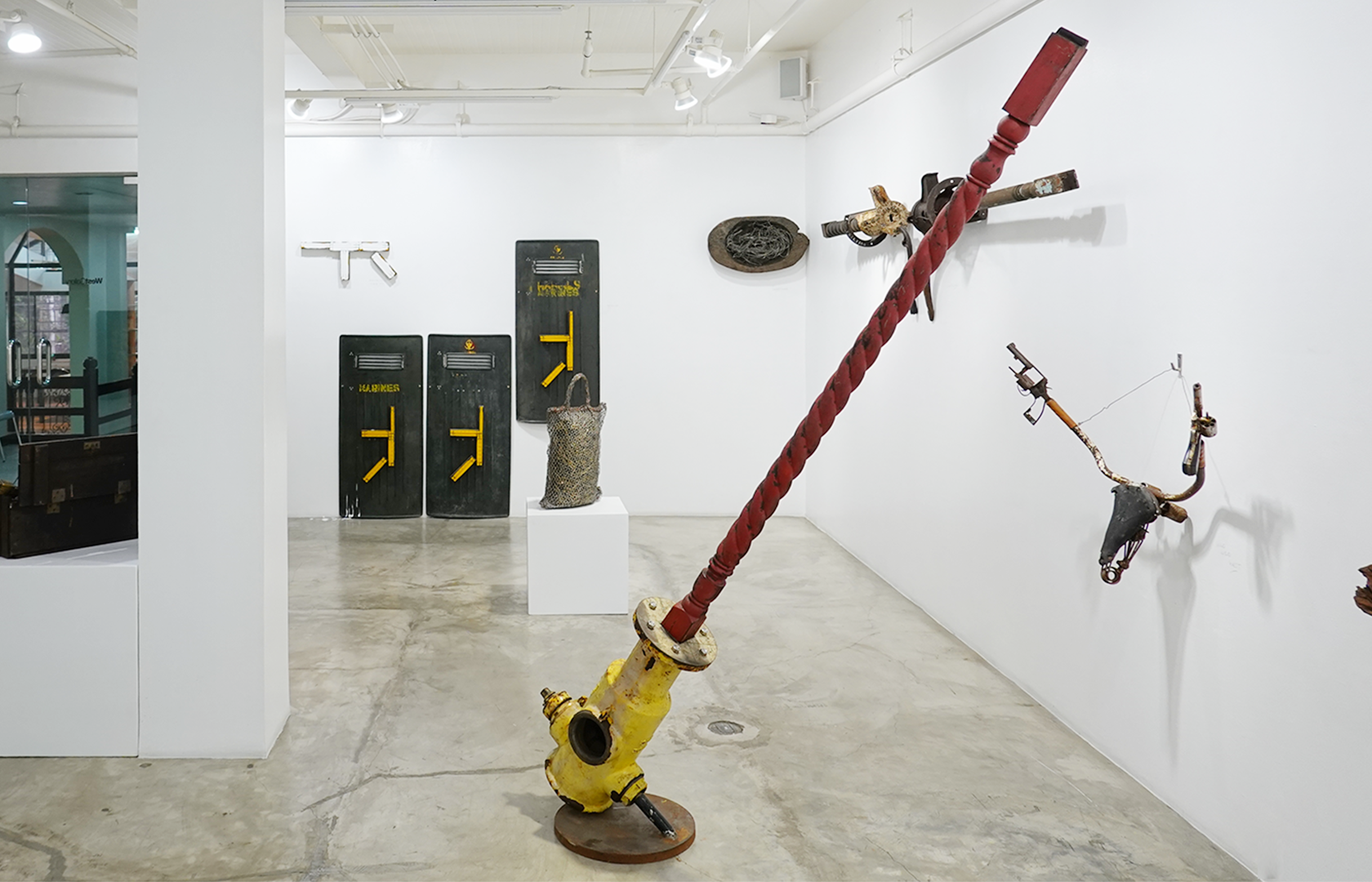 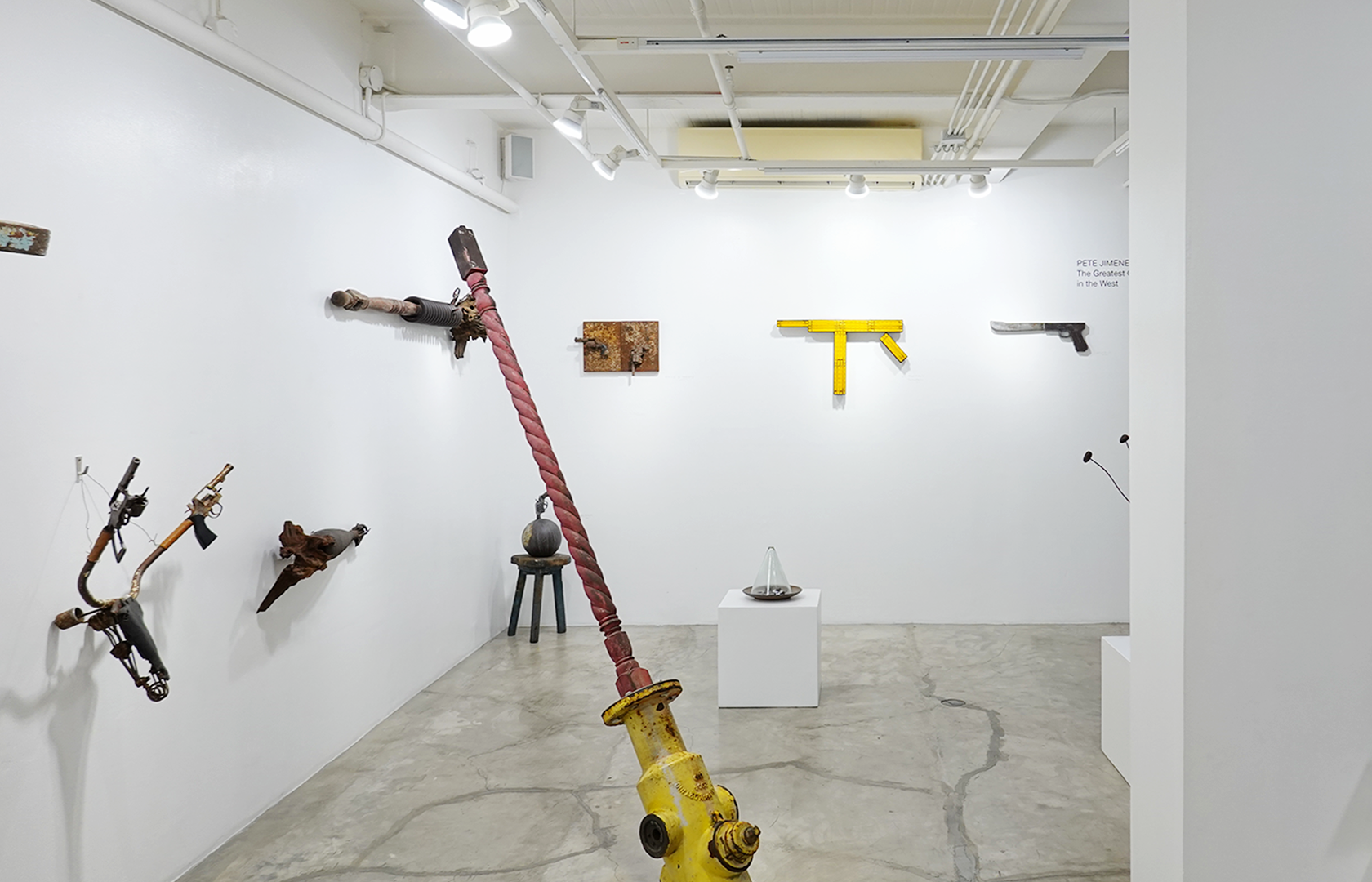 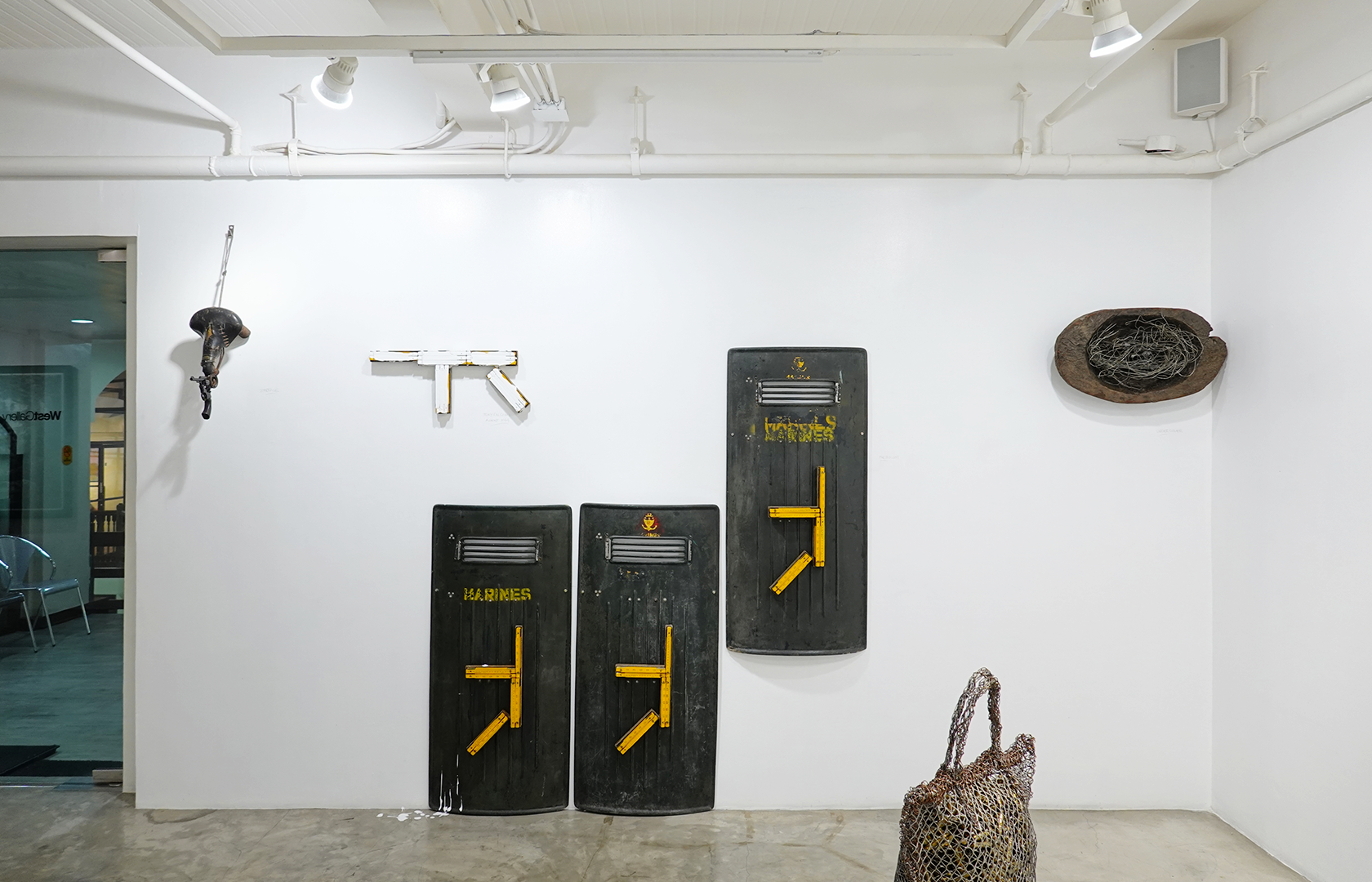 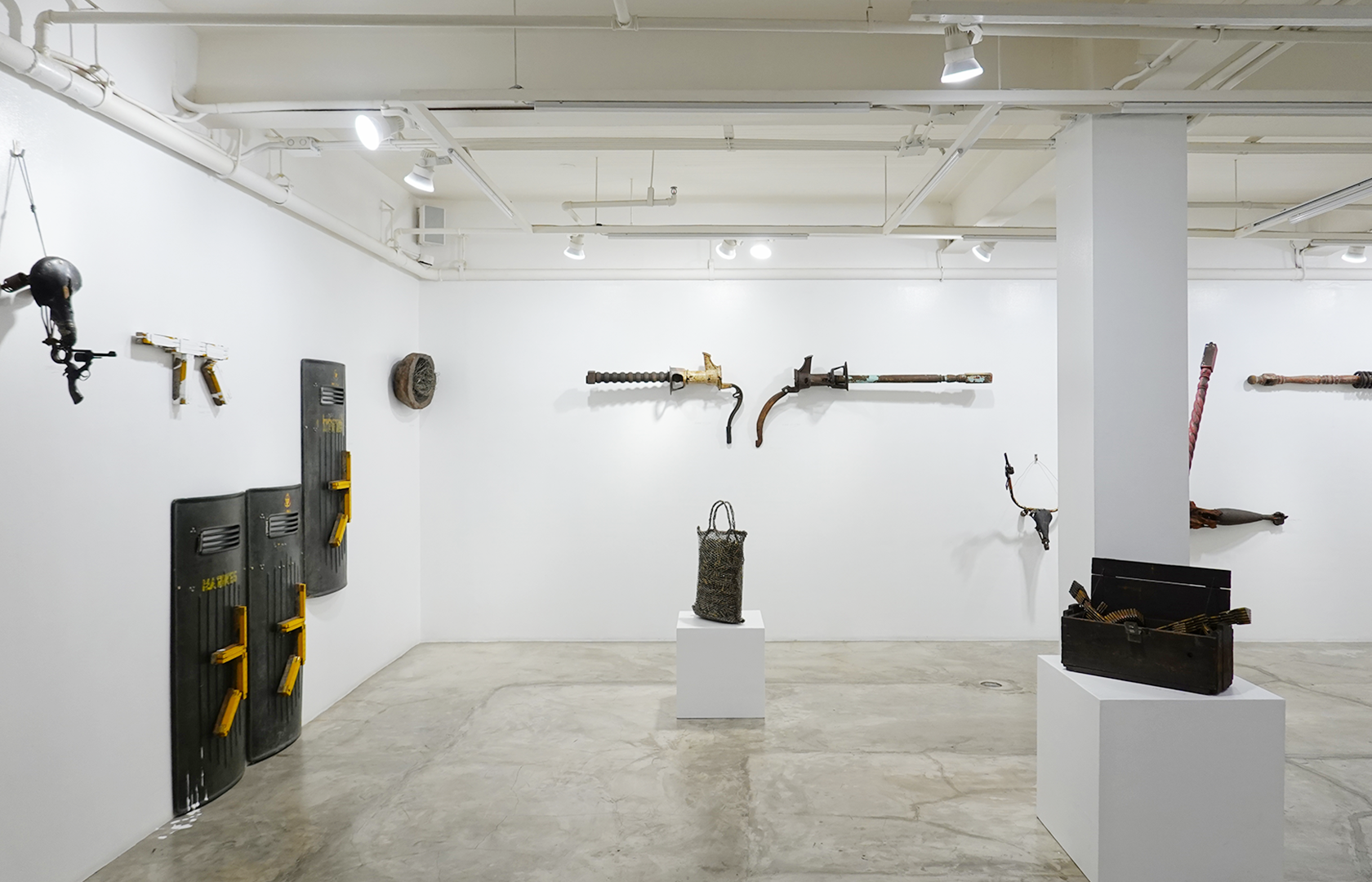 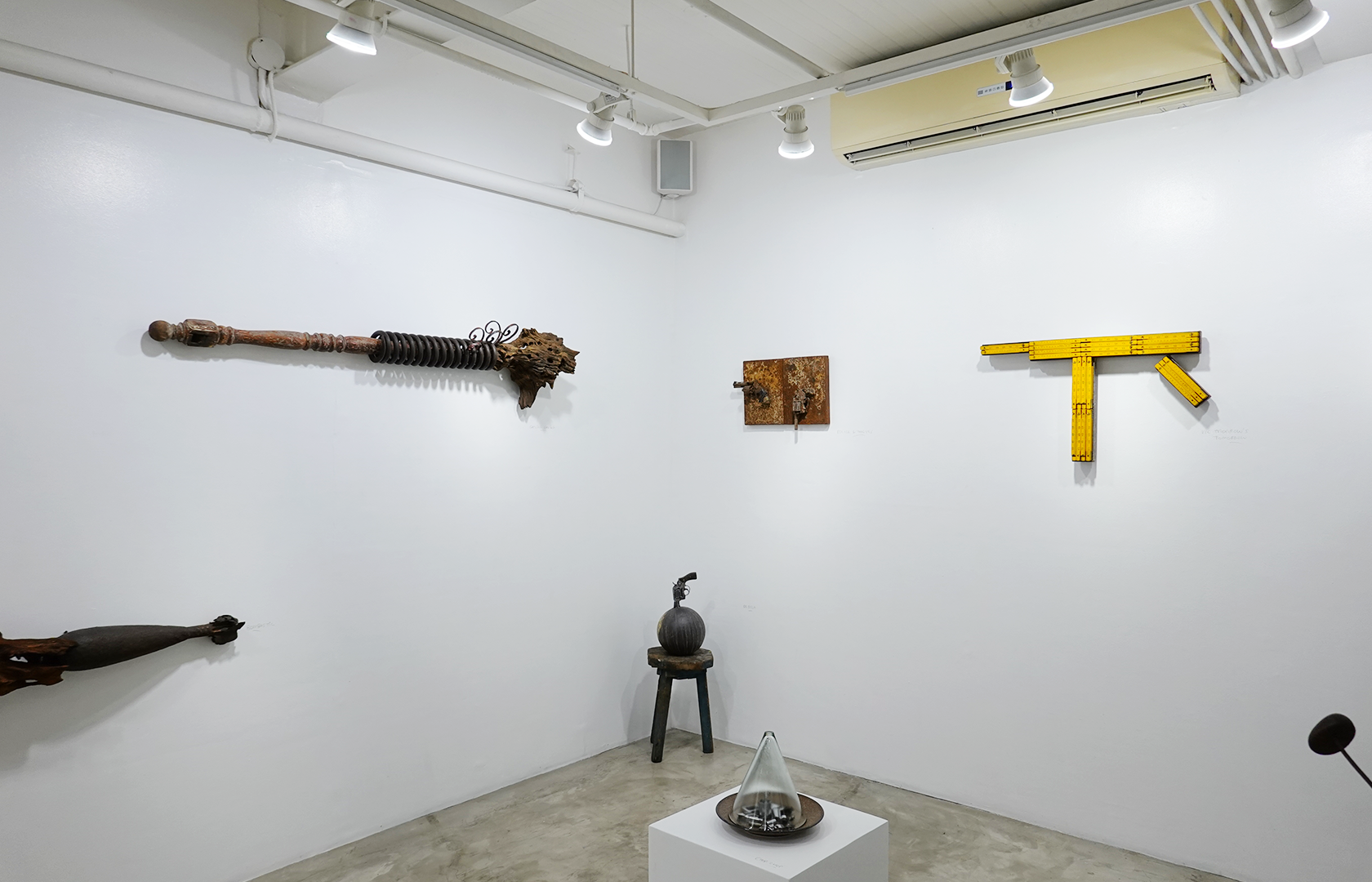 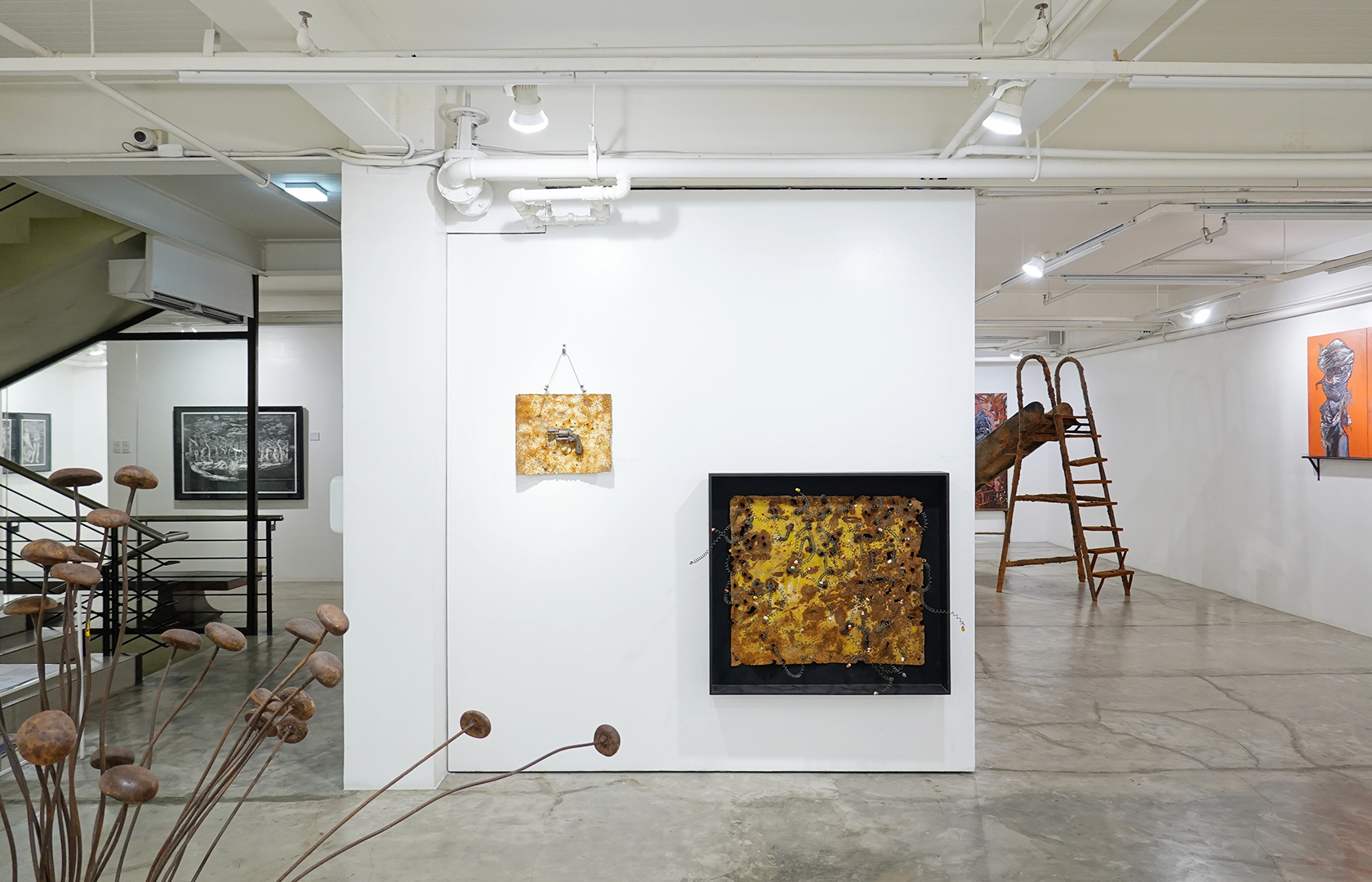 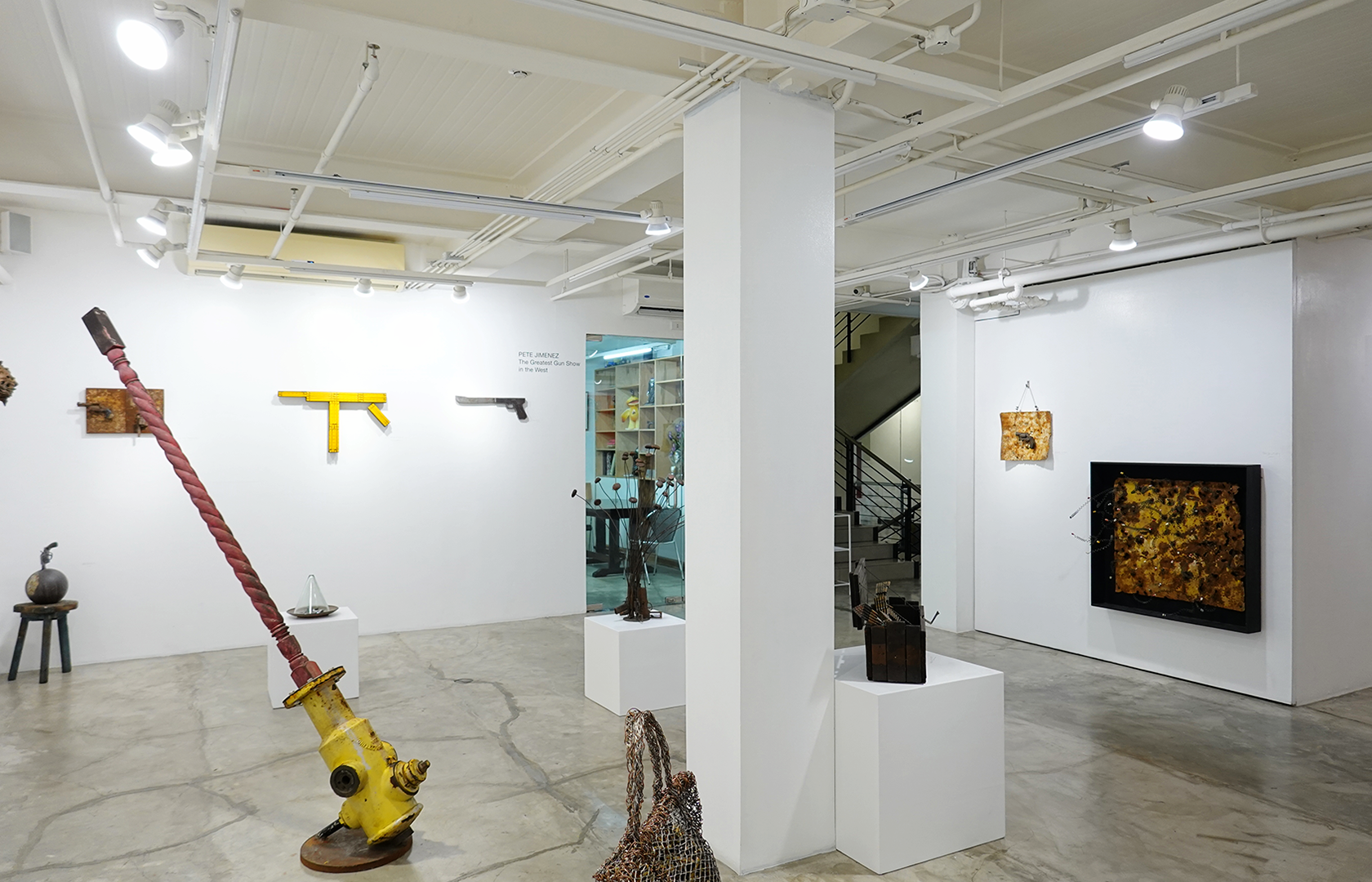