“There is a crack in everything.
That’s how the light gets in.”
– Leonard Cohen

John Venn’s introduction of Euler diagrams in 1880 made it possible for math and logic to create parameters of different sets to arrive at a certain categorical syllogism; an intersecting portion from each circle that leads to a conclusion. The revelation of geographical logic in two overlapping circles alternately can represent shared existence of the theoretical and actual; the conceptual and real; the separation and connection. Beejay Esber relates his art practice using the same diagram aiming to find the in-between of his tendencies and limitations he set for himself.

Each component in Esber’s paintings animates the sublime and the mundane in equal measure. His abstraction of the organic elements and geometrical forms conveys a negotiation against his immediate psyche. In his works he forgoes the use of lenticulars as his background and employs impressionistic gestures with his paint. To this effect, he reveals the immediacy of the images. Rather than imminent foreground to holographic backgrounds they become immanent subjects with hidden messages. In limiting his palette to monochromatic hues, his convoluted fictional space is muted and becomes an entry point for meditation – an intersection for contemplation.

For the unsuspecting viewers, the formulation of abstraction in these paintings may conceivably be arbitrary but closer investigation will draw us to an artistic language. Esber’s blithe recreation of lines and forms are utilized as signs and symbols that pierces through as non-linear narration of ideas. The accentuated lines and ellipses construct an ominous directional movement to his narratives. In his search for self-expression he emerges with a personal algorithmic expression; one that is self-contained but possesses universality; one that provides set of rules but allows the viewers to wander freely into its own space.

In Circle Intersection Algorithm, Beejay Esber uses the canvases as a battleground in the fray over his insomnious state. The whites and the grays are the visual noises that keep him awake, that he forces to expel from his head. They become the images, the scribbles and purported messages. When all the achromatic colors are segregated, he hopes to find a pitch-dark middle ground, from which he finds an immutable parley to clarity and serenity.
Words by: leCruz 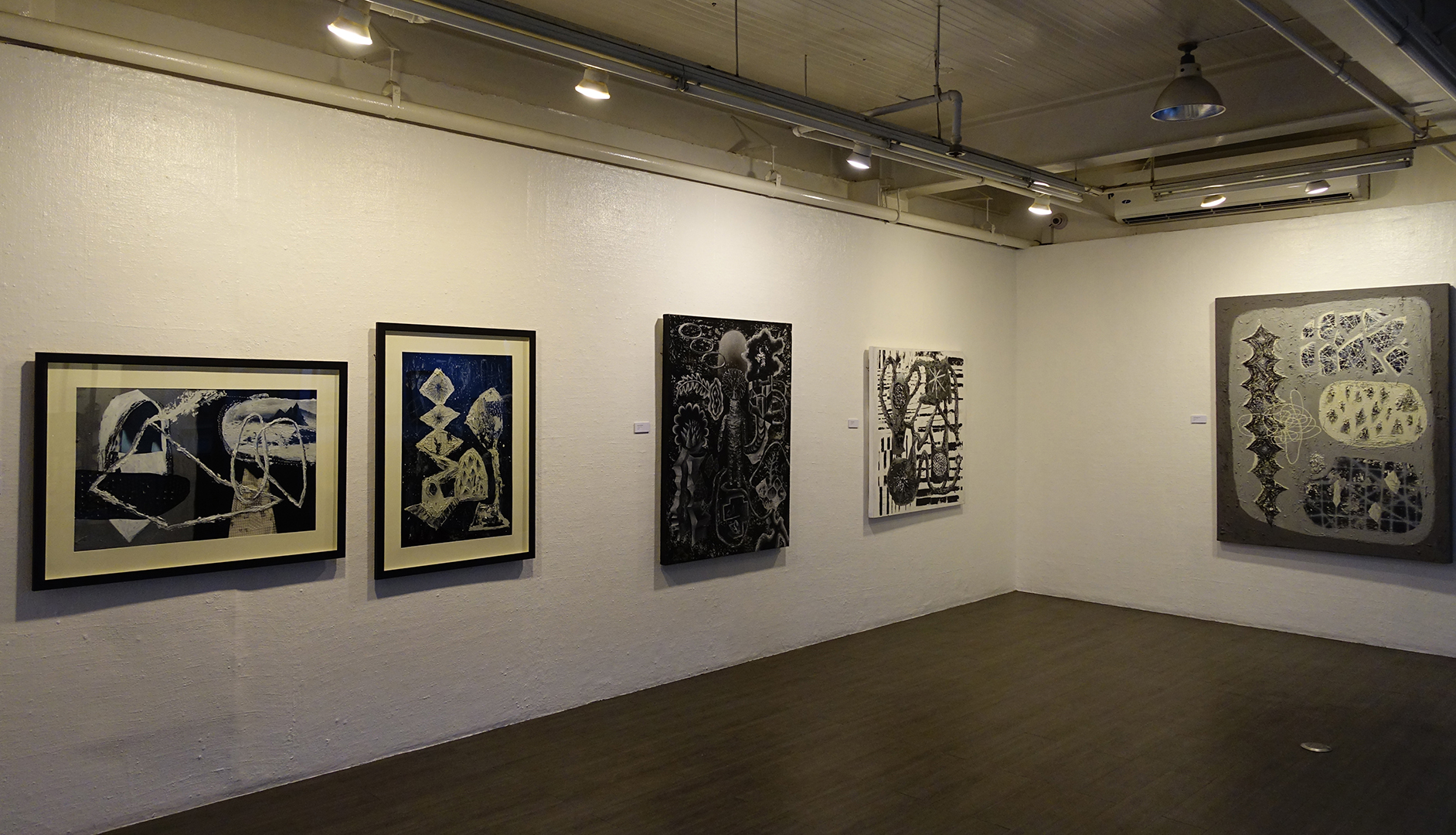 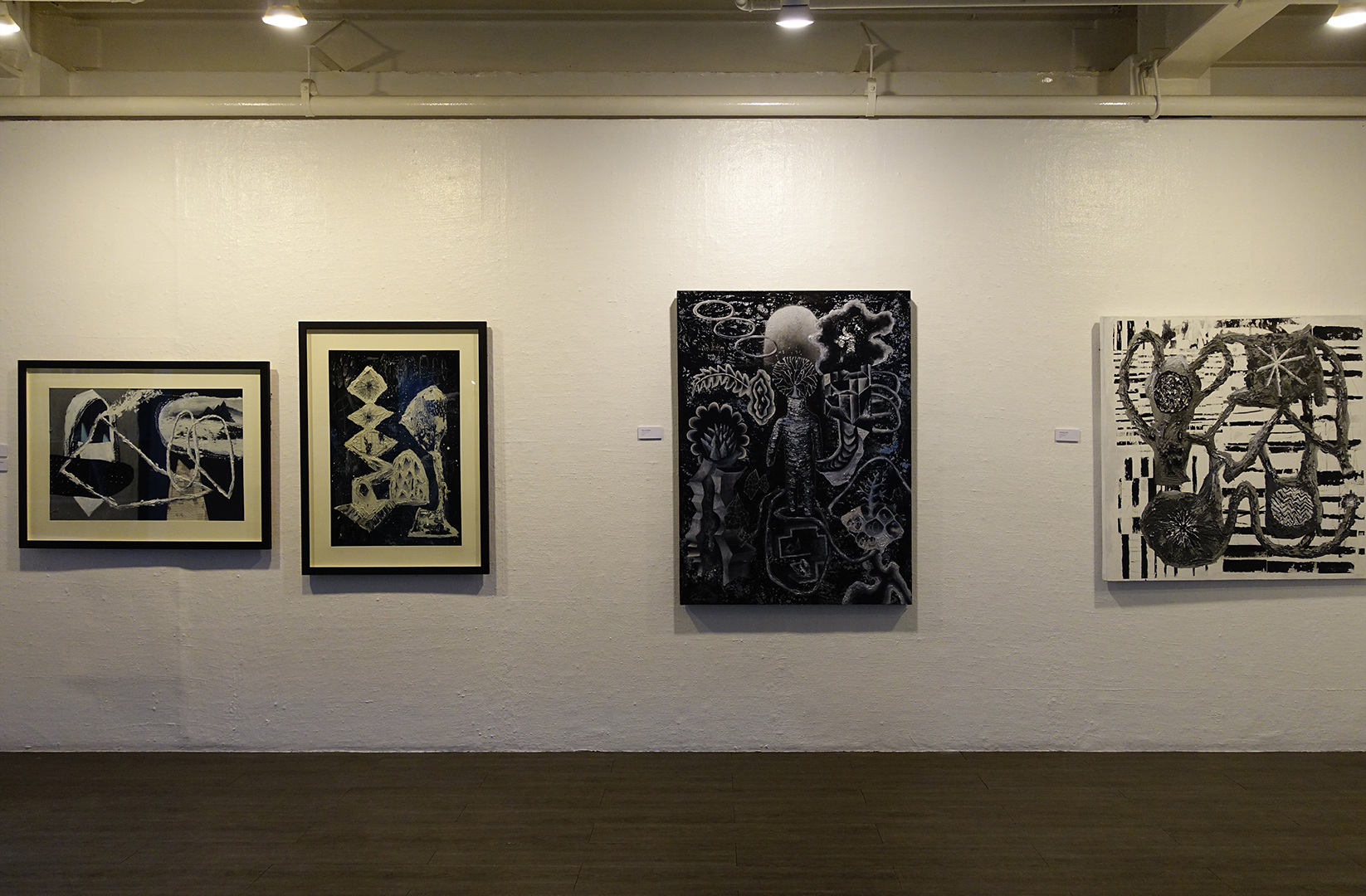 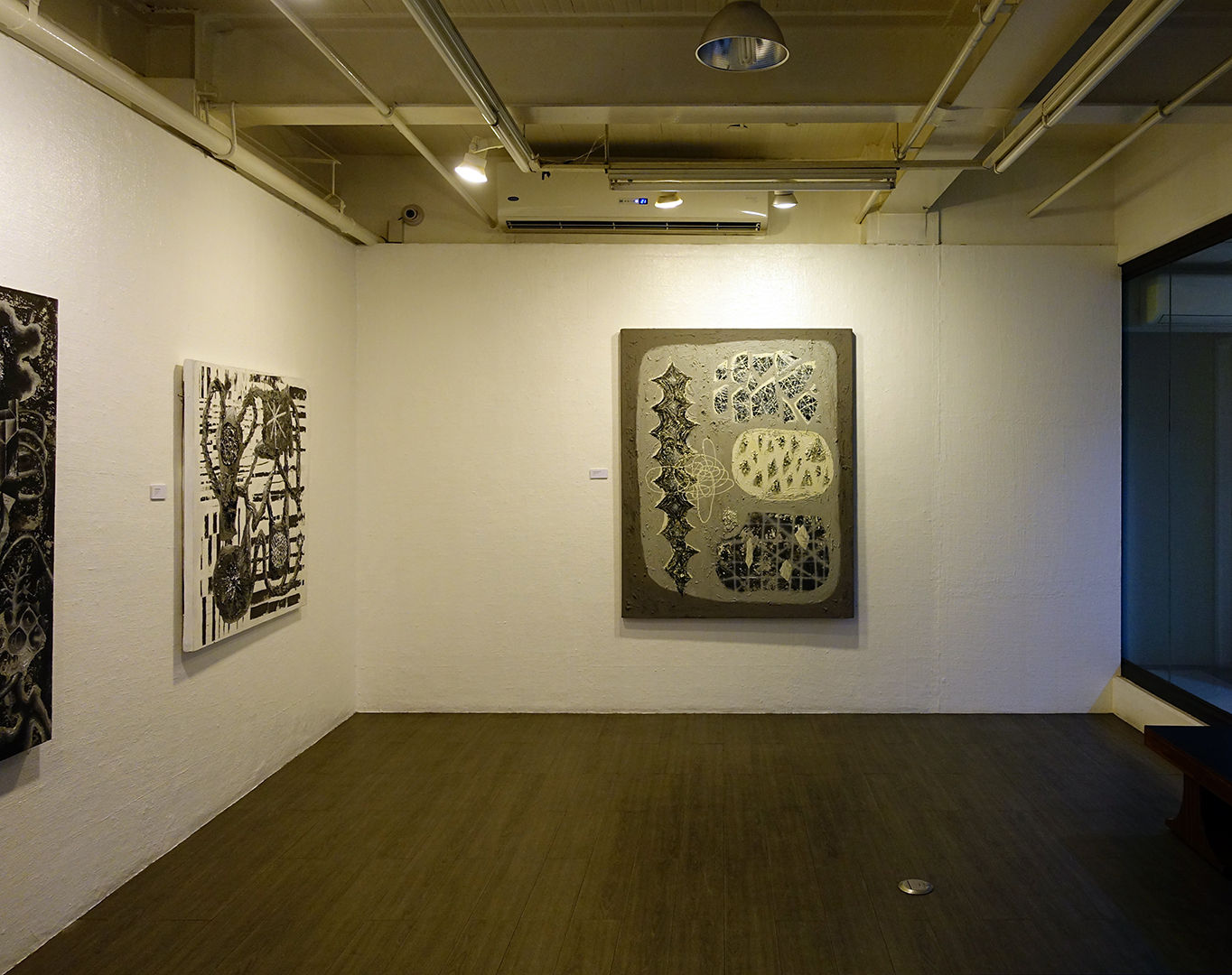 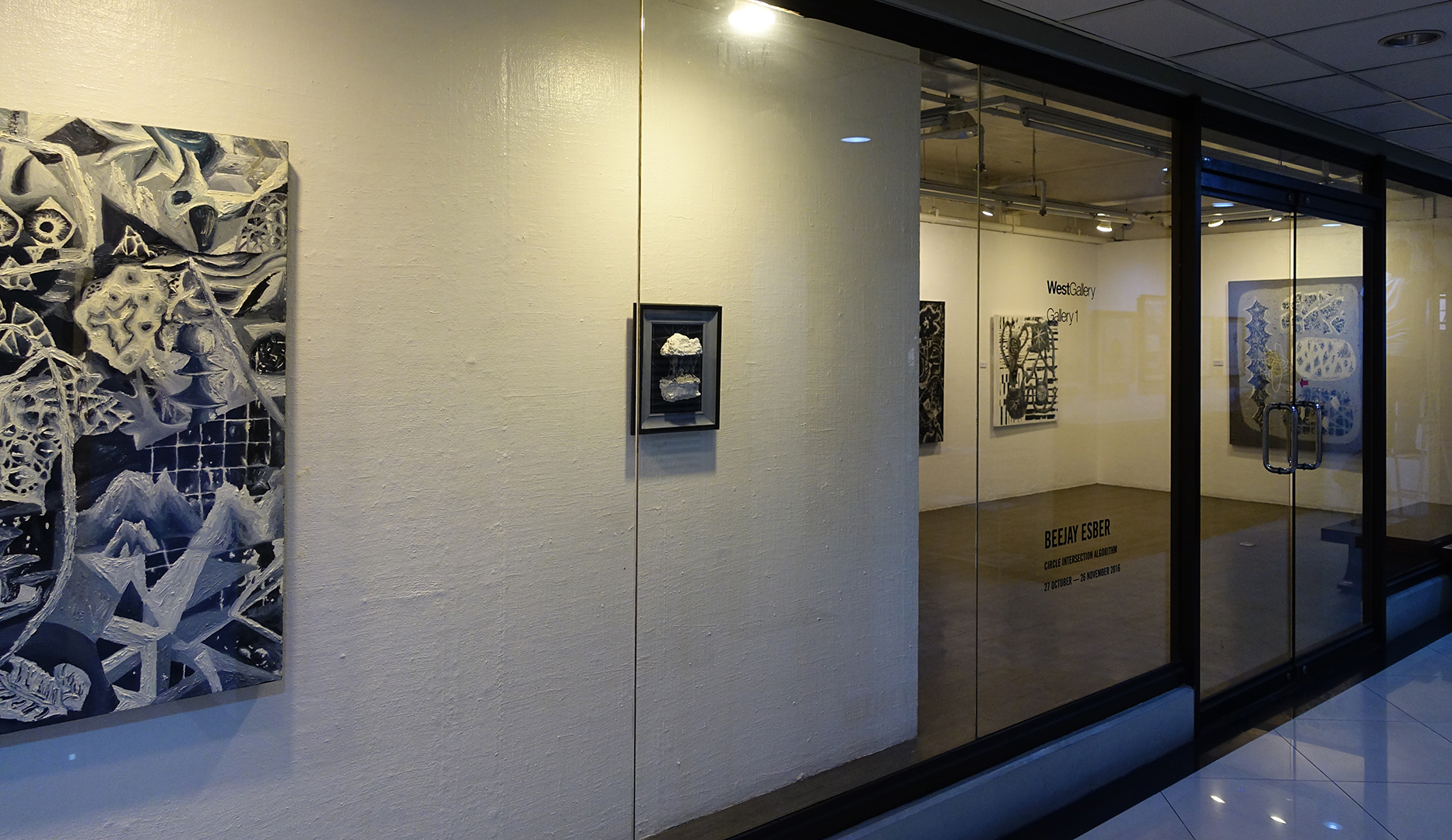 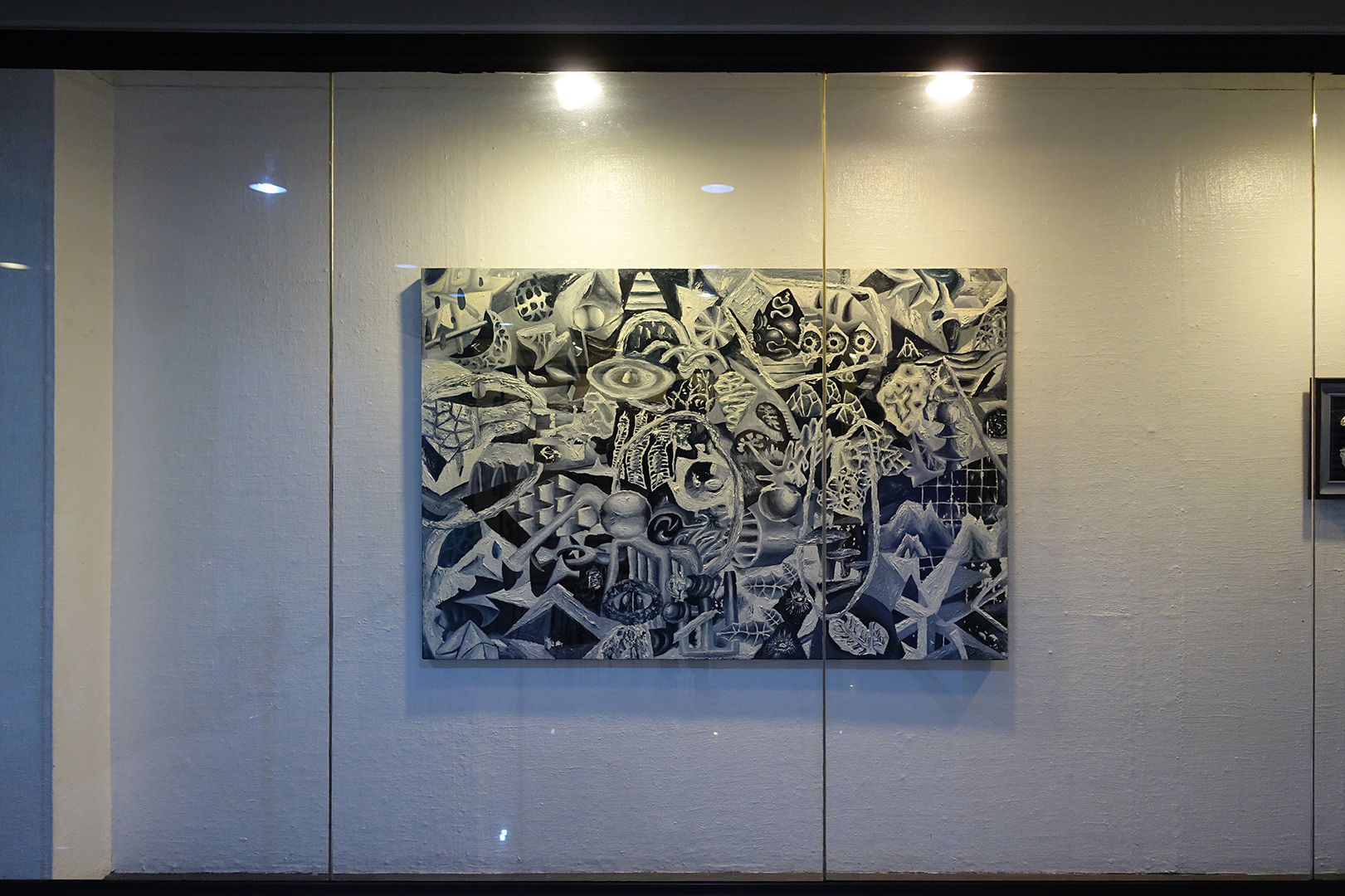 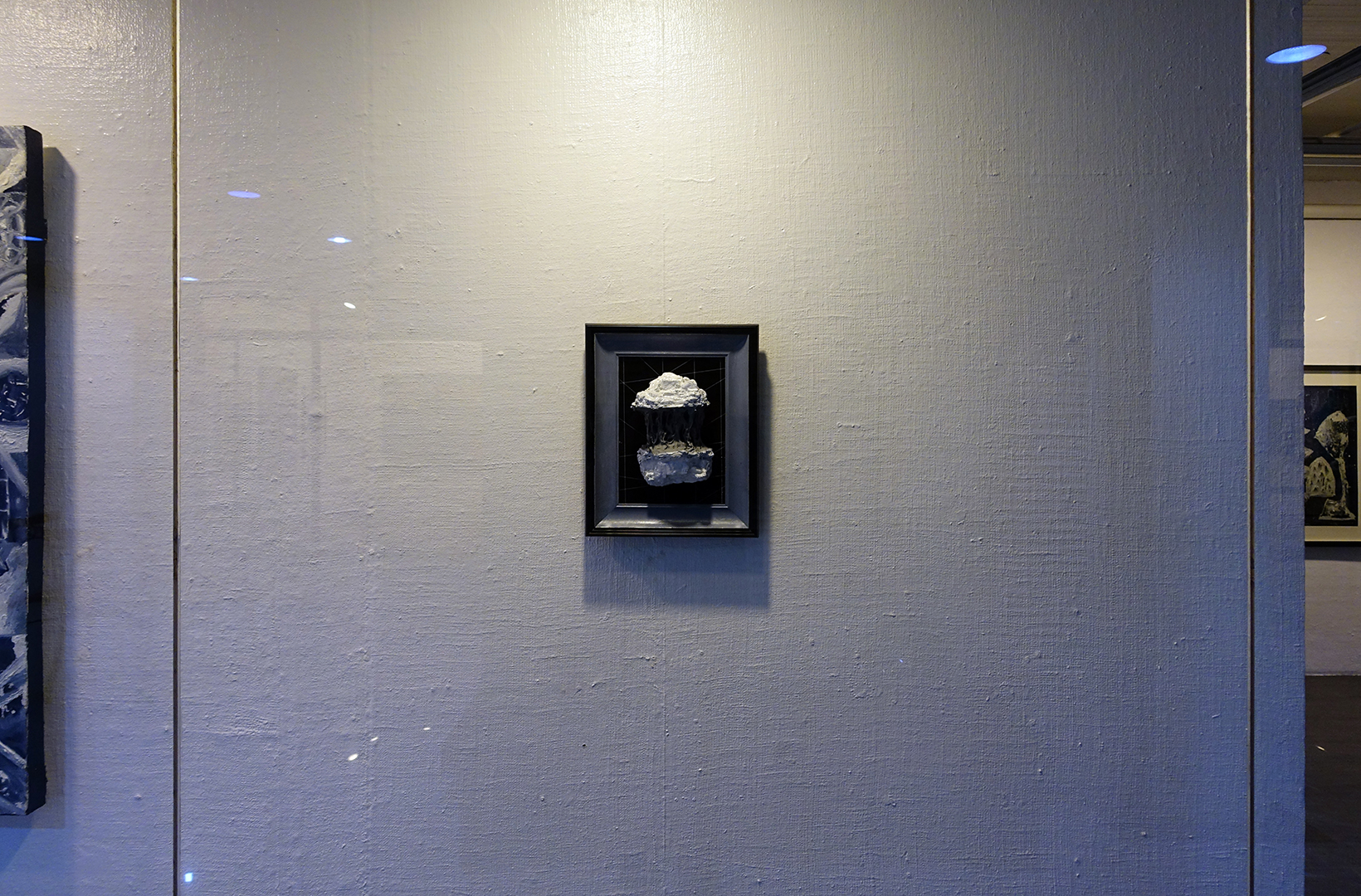