“As the days and nights start to bleed into each other, I feel like a somnambulist exploring the boundary of reality and memories… Statues become more human after the experience of isolation.”

When lockdown began in New York City last March, which was then the global epicenter of the pandemic, Urmaza had to turn to available materials in her studio. She mined her own trove of previously collected vintage books and old paper ephemera,and photographs taken during her past career as a professional photographer.

Just before quarantine was imposed, Urmaza was already contemplating cyanotypes as a medium, and was experimenting with different types of paper. Her foray into cyanotypes began as early as 2003 when she took an alternative printing class at the International Center of Photography in Manhattan. The pandemic’s sudden emergence sealed her decision to work with the medium out of necessity.  She converted a spare bathroom in her home into a makeshift darkroom by covering its windows with black garbage bags, brought in an incandescent desk lamp with low wattage and purchased chemicals from a photo store.

Her process begins with applying an iron compound solution to book pages, then drying them in the dark. Meanwhile, she selects images from the vintage books and old paper, and from her own archive of black and white prints. These are scanned and printed onto acetates as negatives. The acetates are then placed on top of the dried coated pages and brought outside under the sun for contact printing.  Sometimes, mottled surfaces and stains appear after printing, which lends unpredictability to the process, but also a layer of mystery and nuanced character. Such loss of control was a running theme in her daily life during this period. “Lines between fantasy and fiction are blurred in different hues of blue. There is no specific story being told, but an exploration of mood or tone.  There is no beginning, middle and end in this series:  just the alternating sense of tranquility and unsettling feelings, as the days and nights overlap.”

While selecting images for her work, myths, folklore and ghost stories seemed to leap from the pages. She found herself drawn to statues with human characteristics, such as the one with tears streaming down its face—a reflection of the horror and death that abounded, strangers in their solitary walk—an activity that defined surreal afternoons in her neighborhood with its eerily empty playgrounds, a house with a rocking horse—as homes became our only safe havens from illness, and photos of trees and water—her sources of comfort from the endless news cycle. Living surrounded by nature and close to the Long Island Sound provided her with the calm stability of its ebb and flow. These images were collaged into a dreamy yet ambiguous world: indigo vignettes that constantly replayed in her mind’s eye. “They become blue reveries in the darkness of my mind… an invitation to daydream.”

Cyanotypes were originally invented by astronomer Sir John Herschel to record notes, a purpose that later evolved when his botanist friend Anna Atkins used the process to create an album of algae specimens. Further on, it was also used to copy architectural plans, hence the term “blueprints”.  Urmaza likewise records our particular time in history by conveying personal and collective thought through varying shades of blue, collage and surface texture.  The resulting compositions appear to be melting into each other:  some parts deeply saturated, while others watered down and faded, alternating shadowy silhouettes with delicate fine details.  Altogether they serve as a stream of consciousness:  “that longing for space, human contact and a return to what was once familiar and safe.” 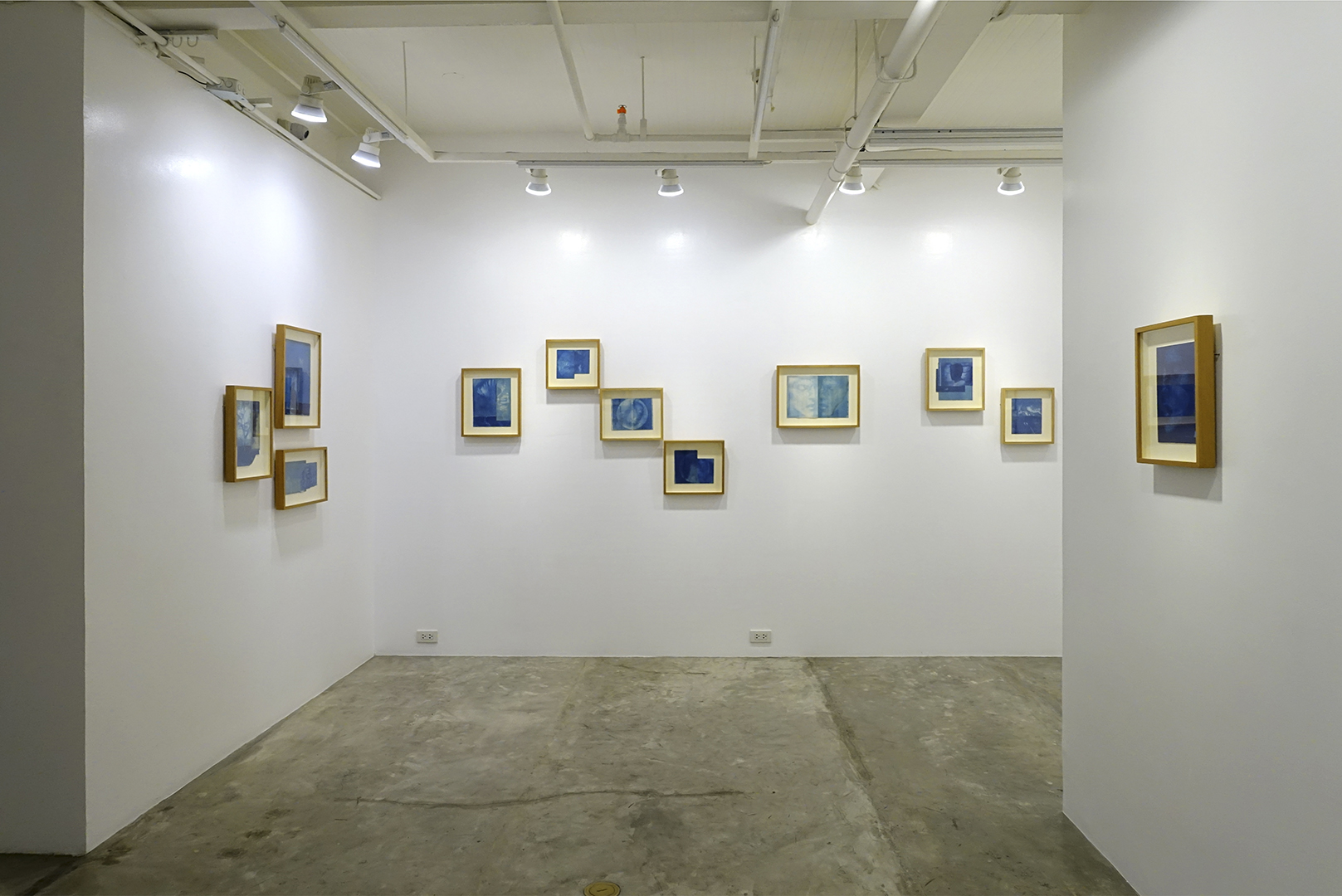 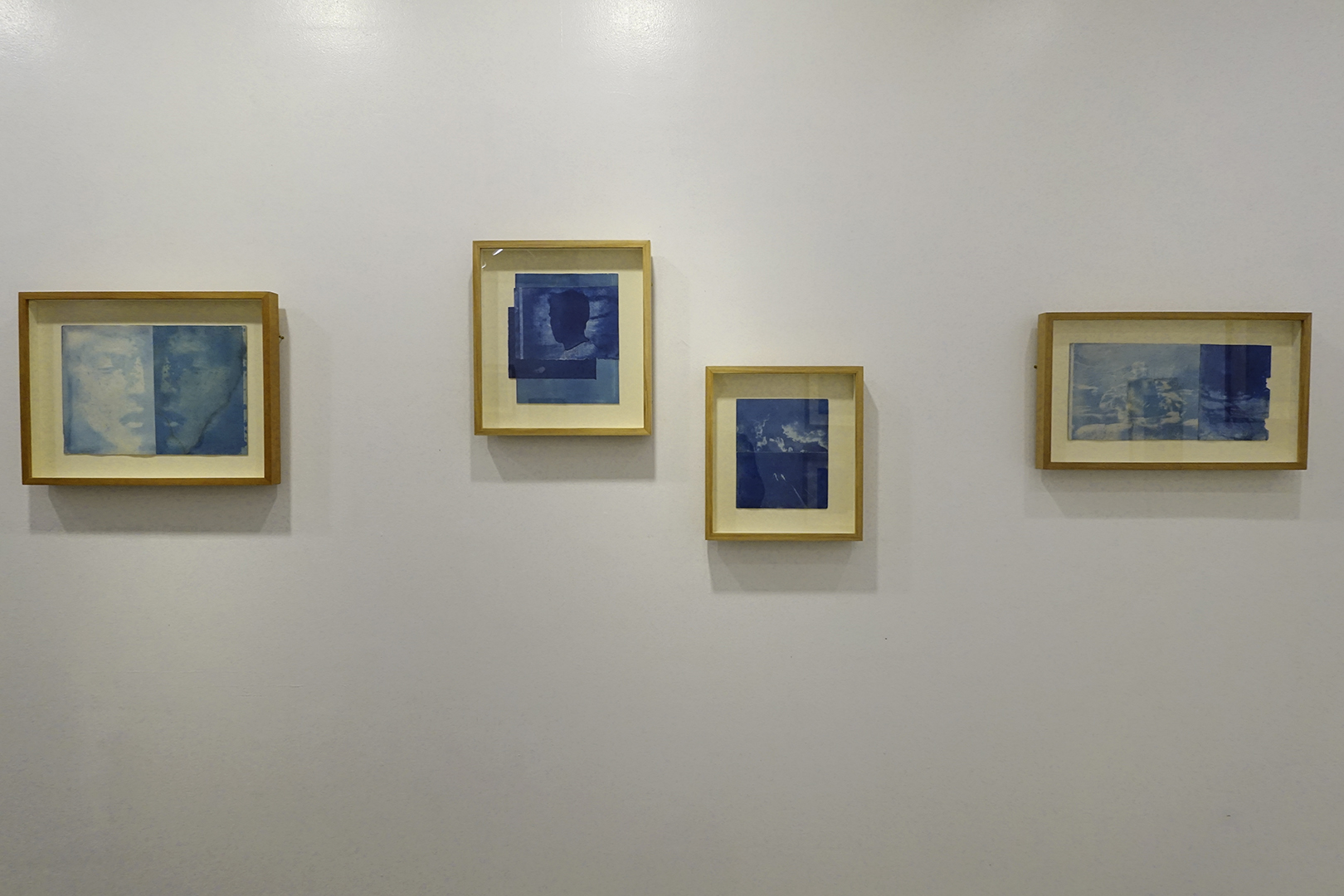 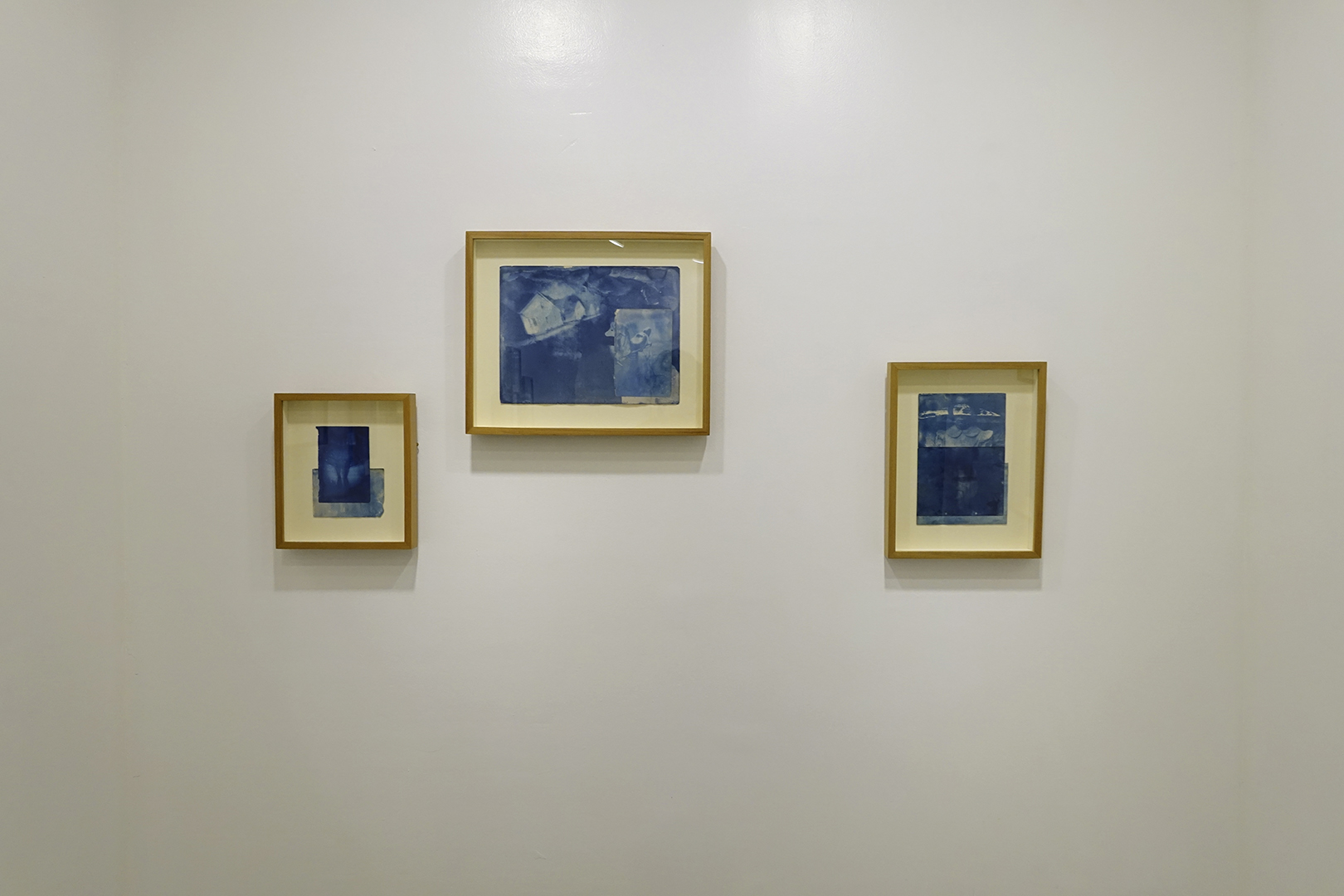 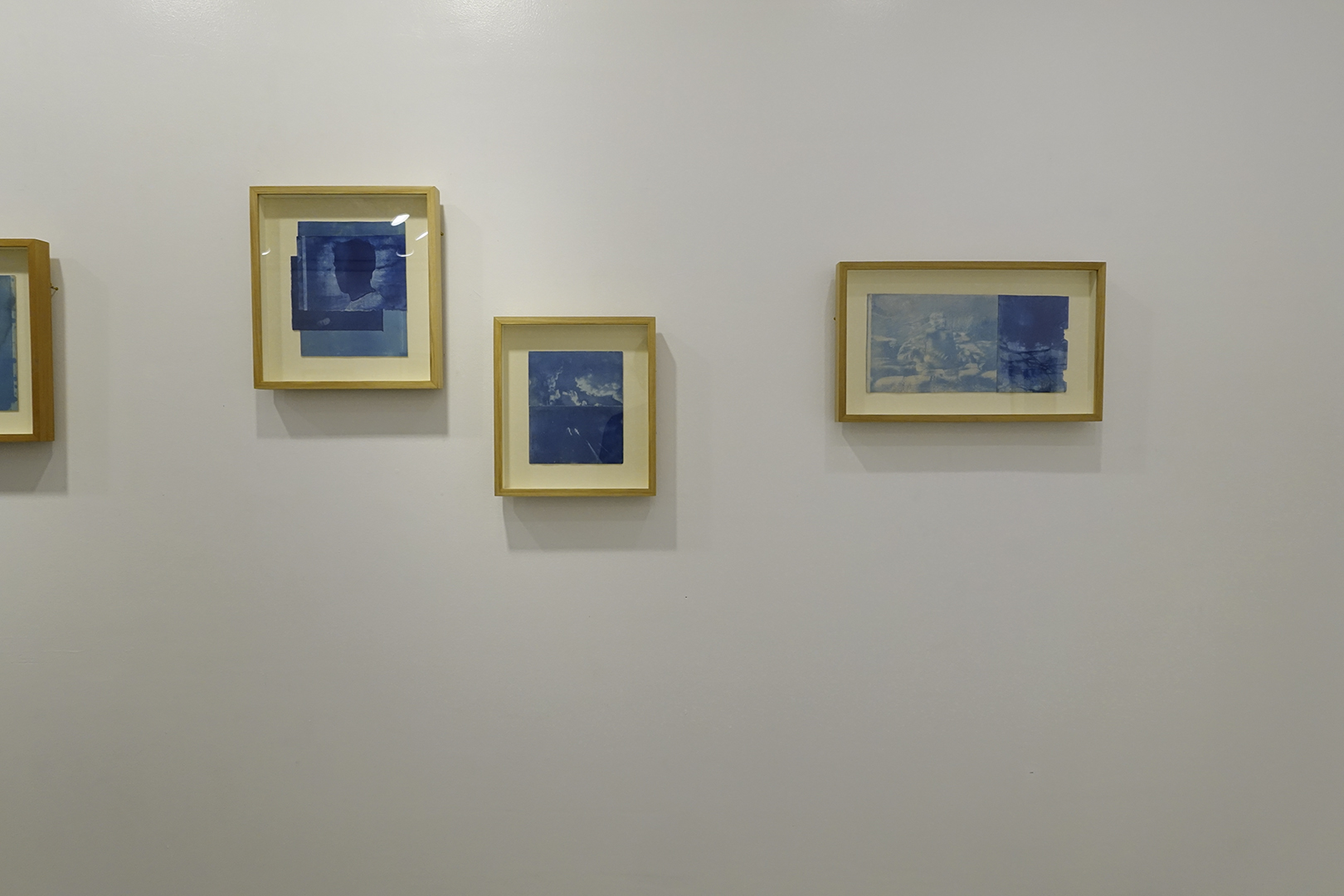 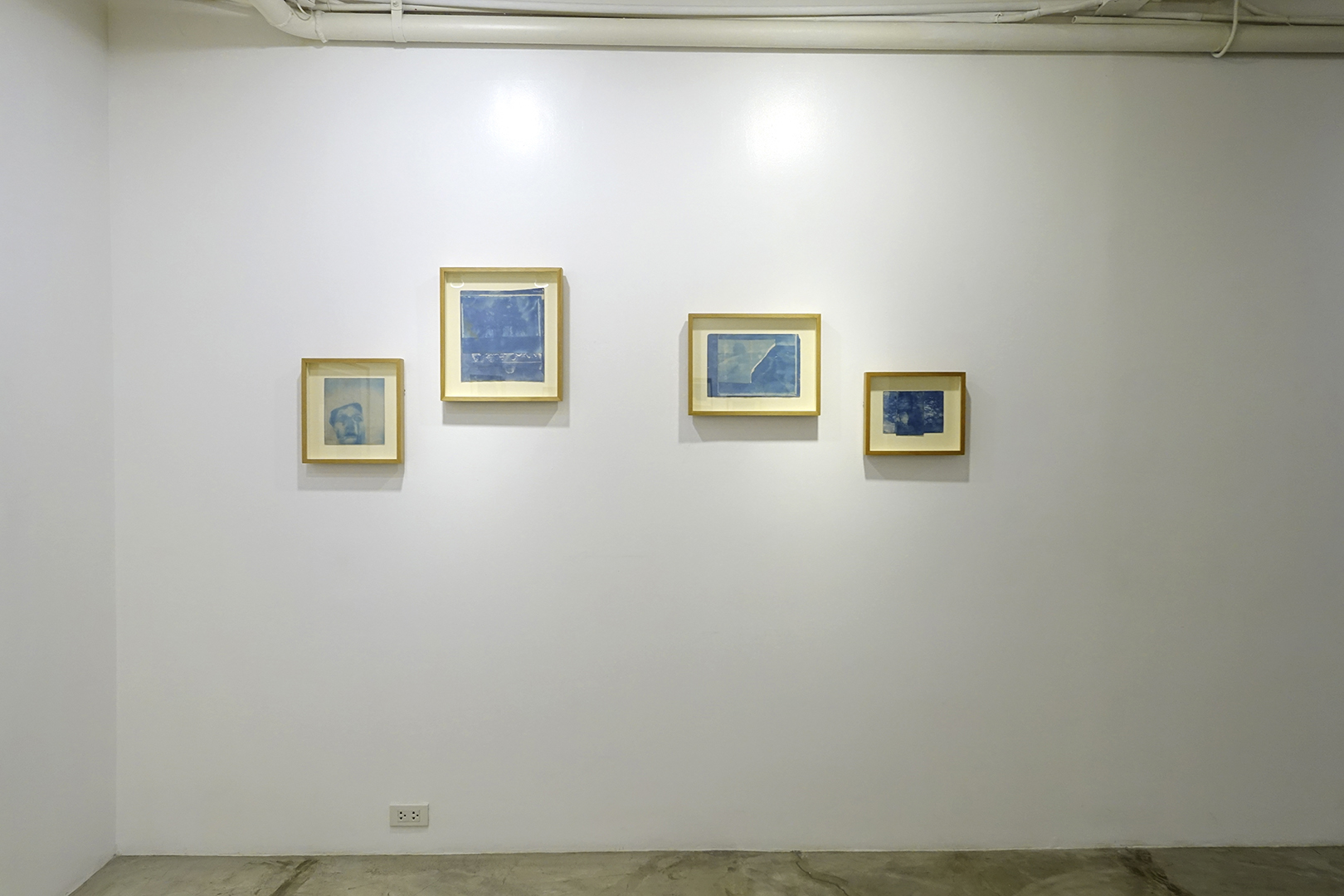 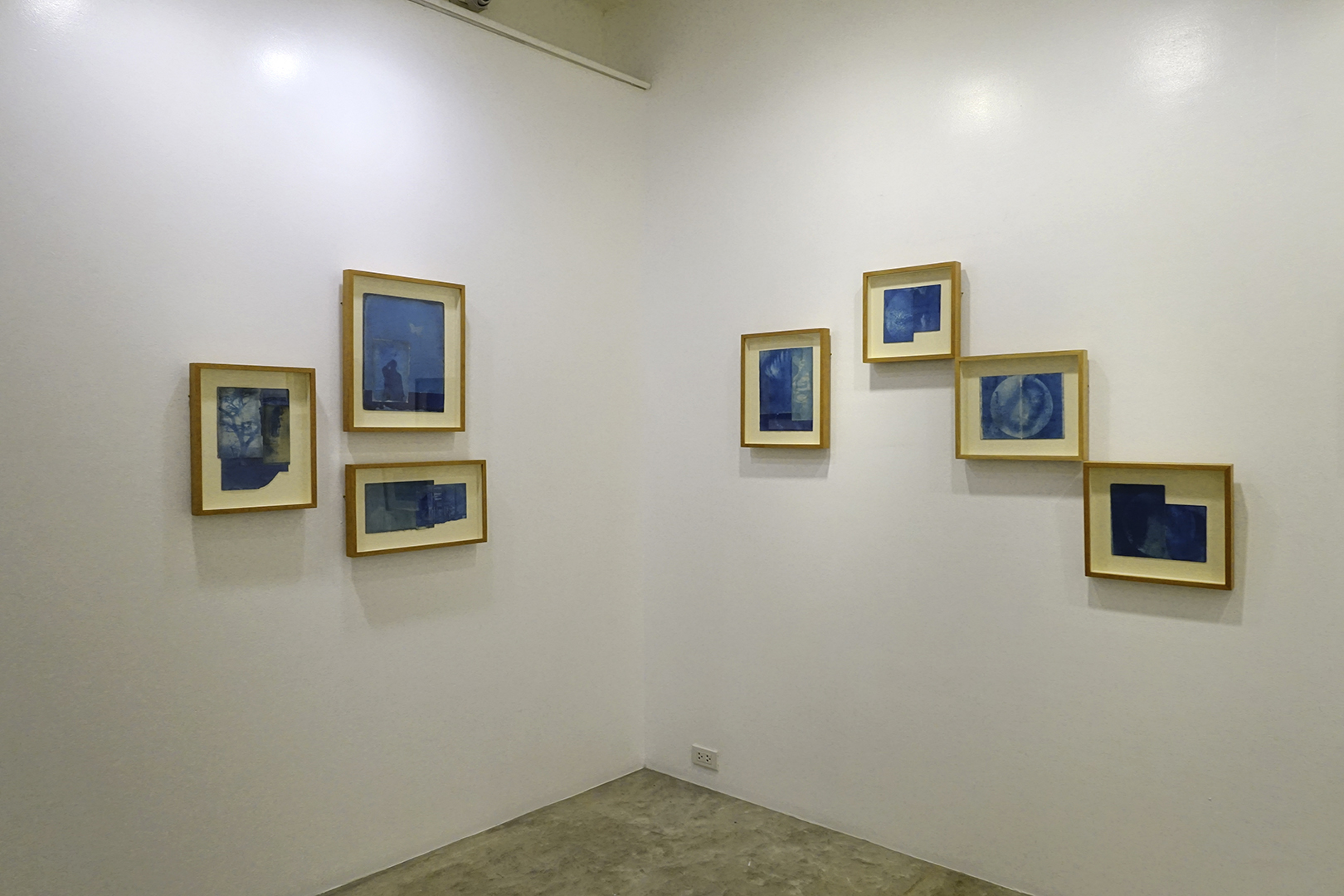 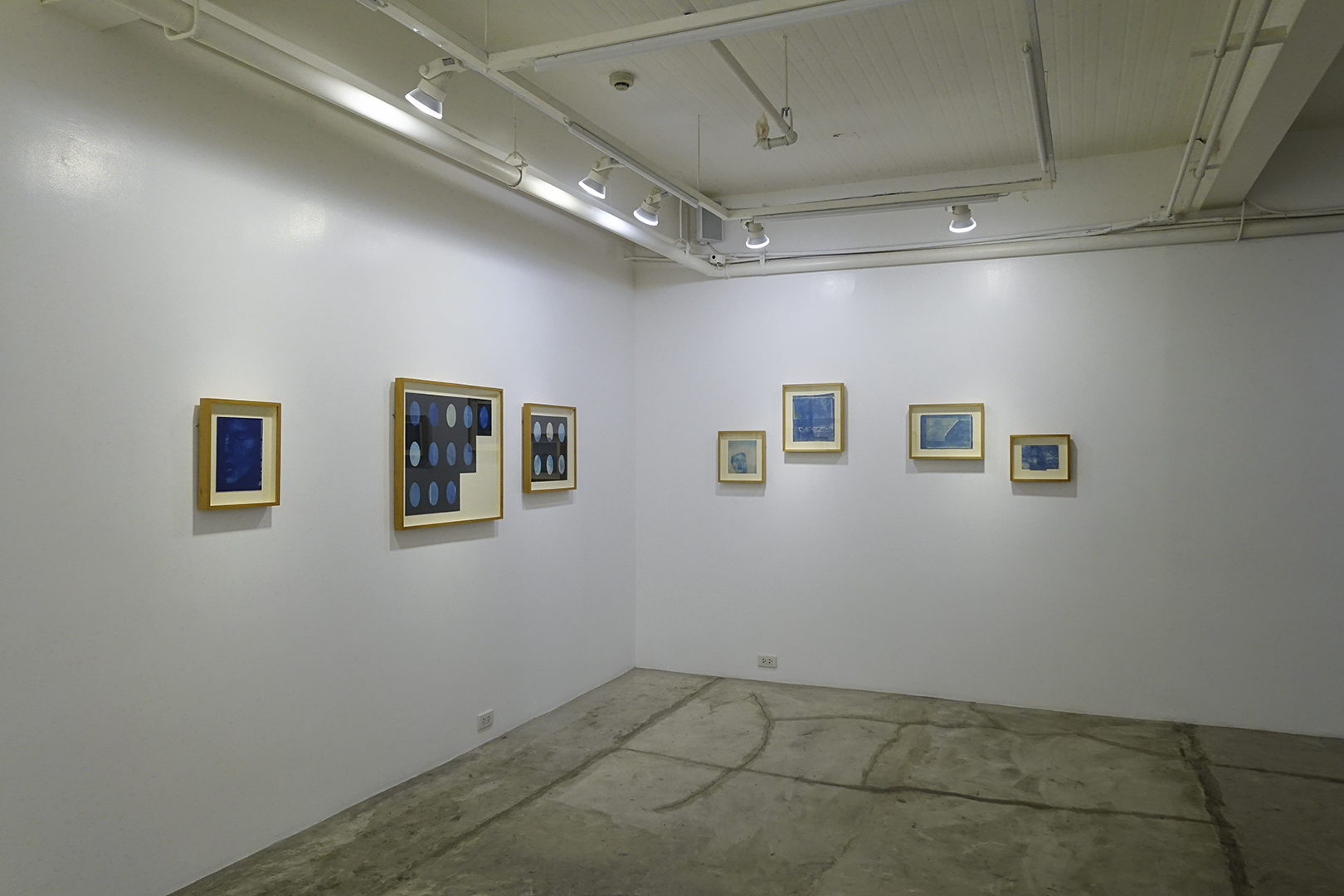 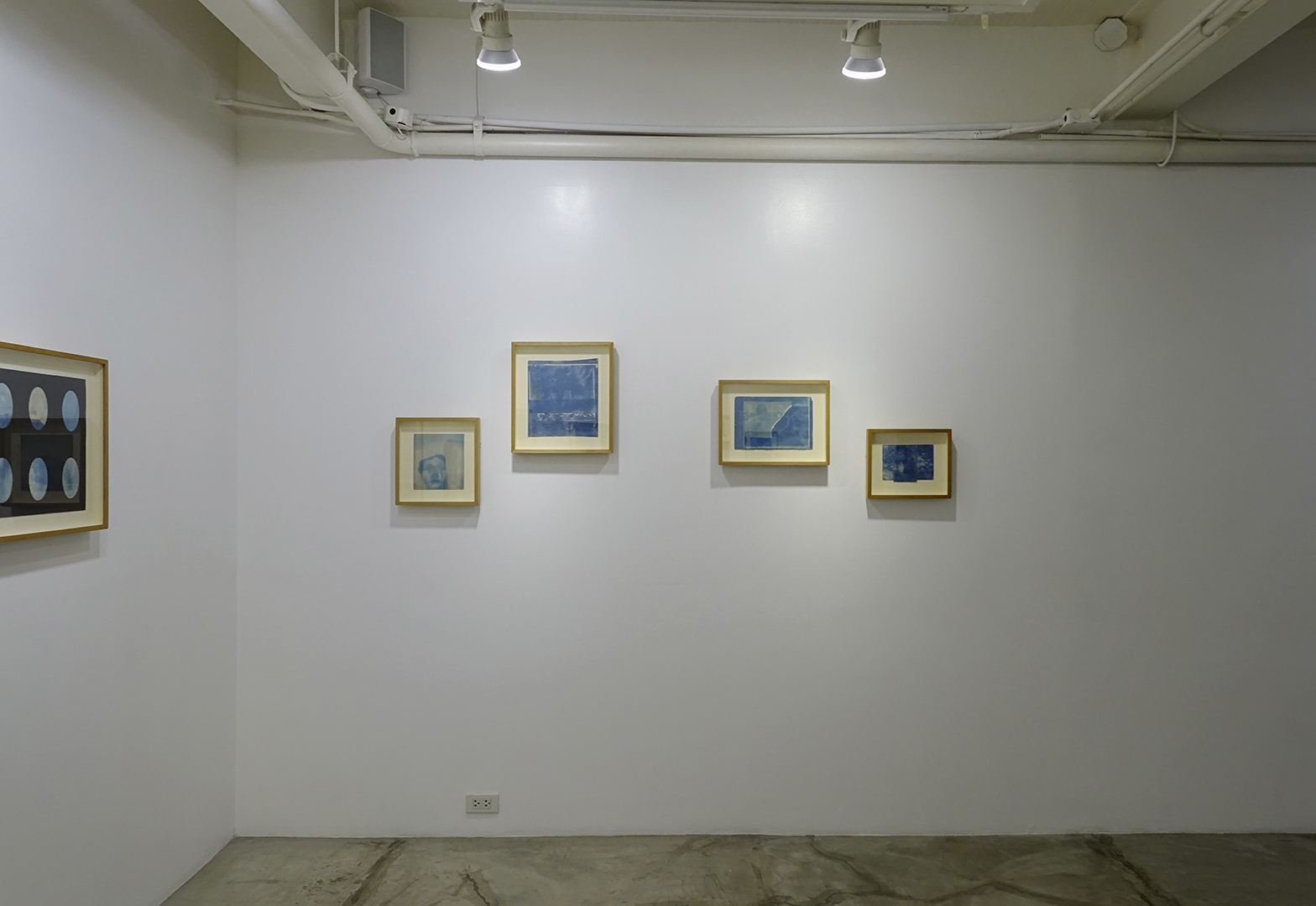 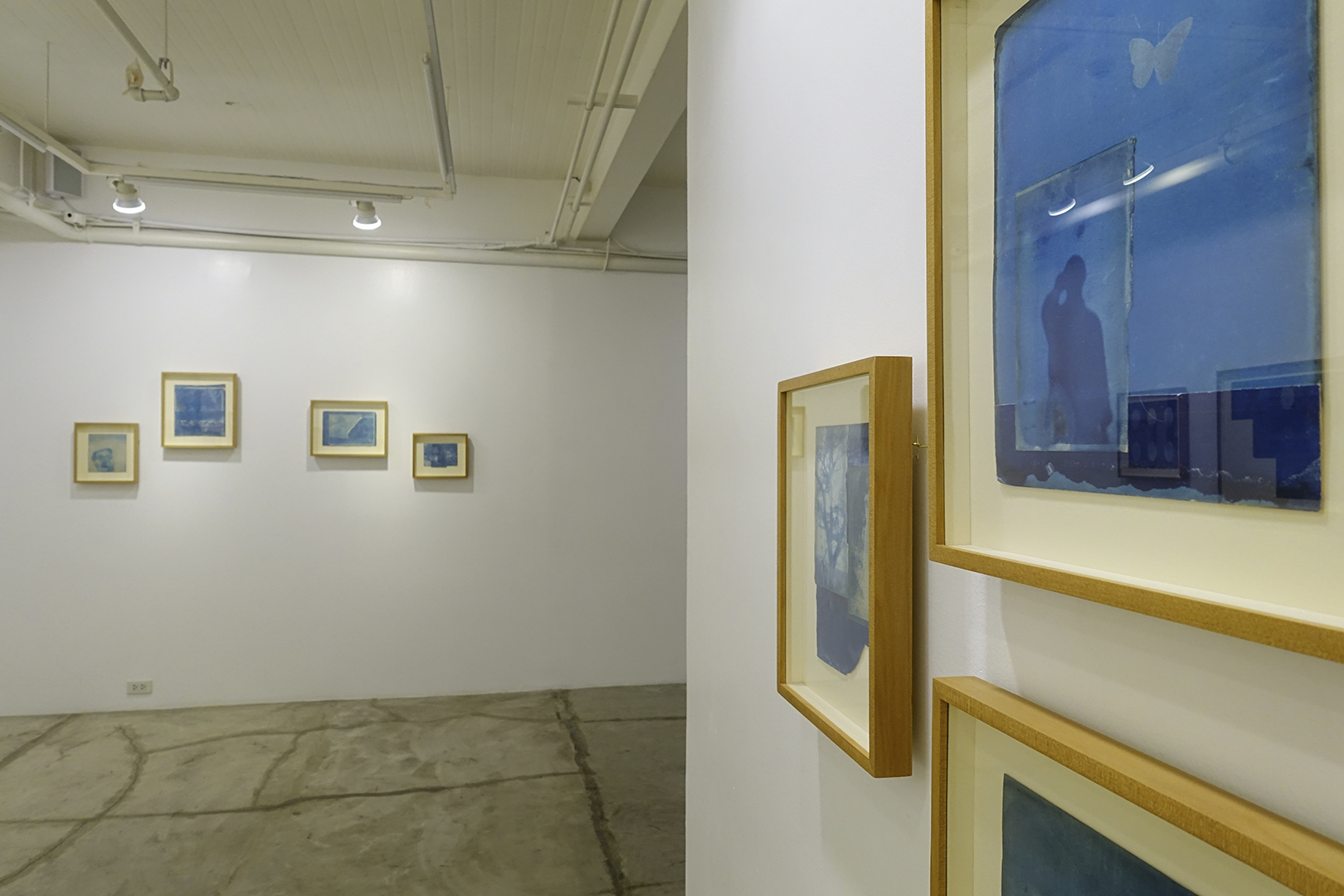 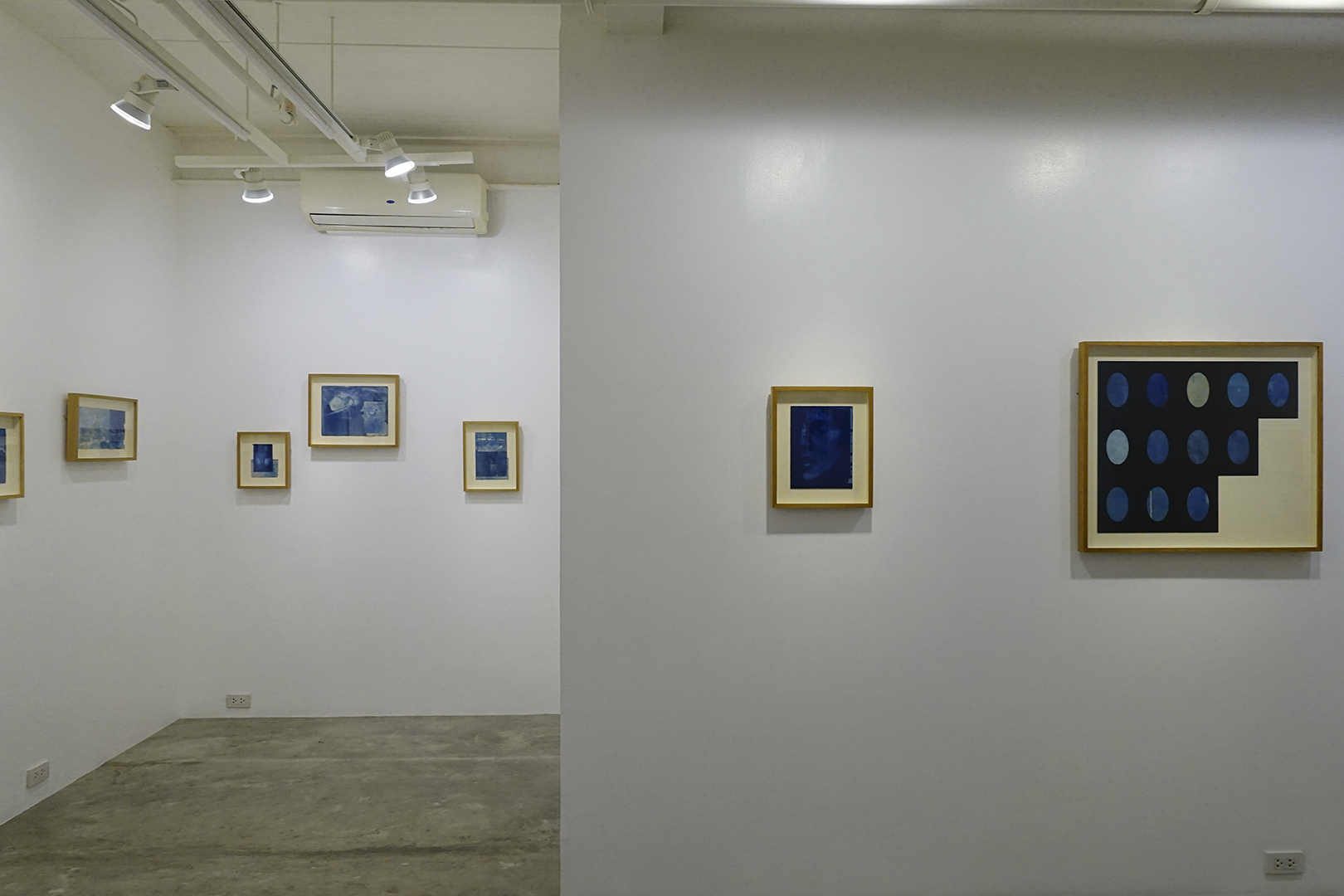 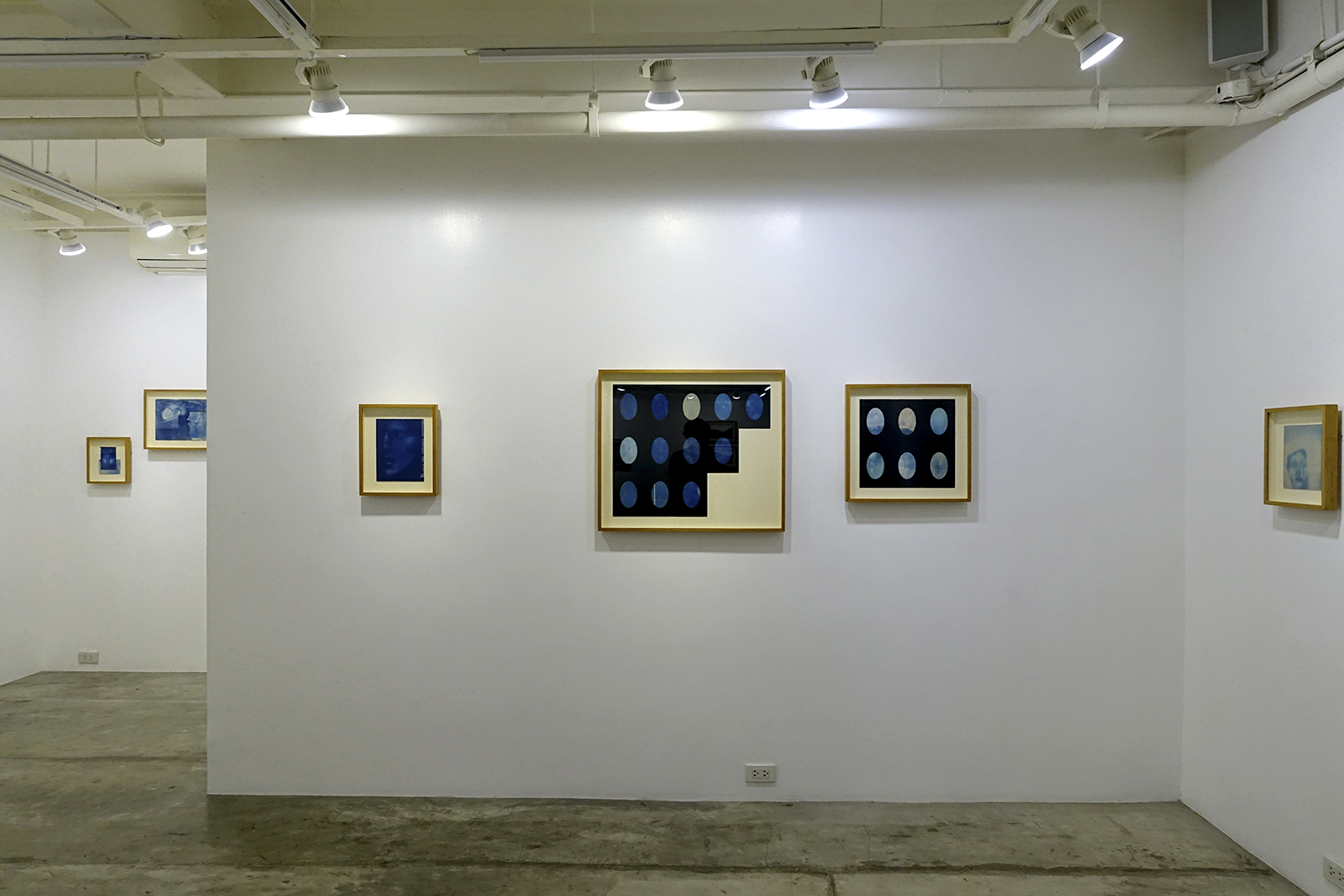 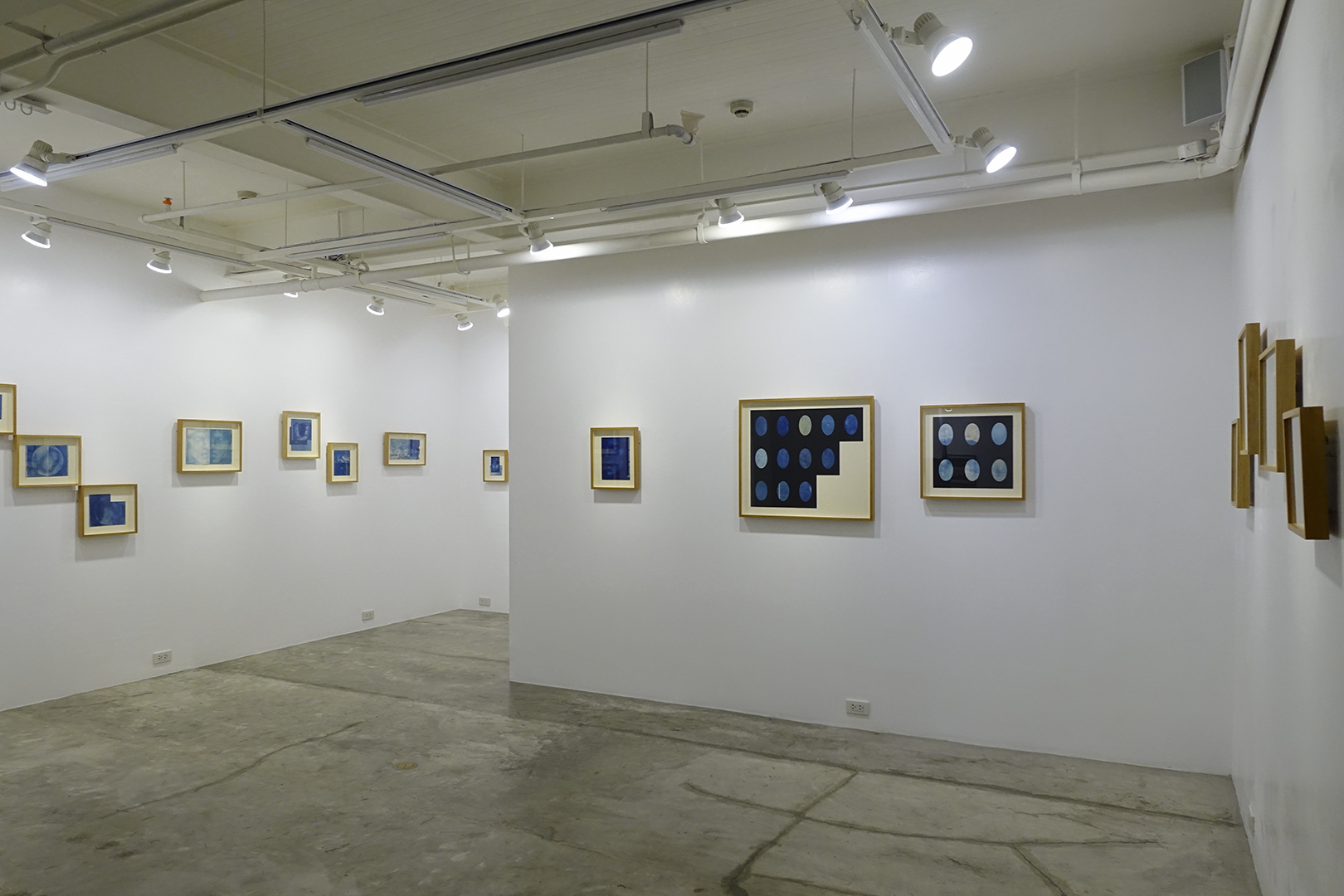 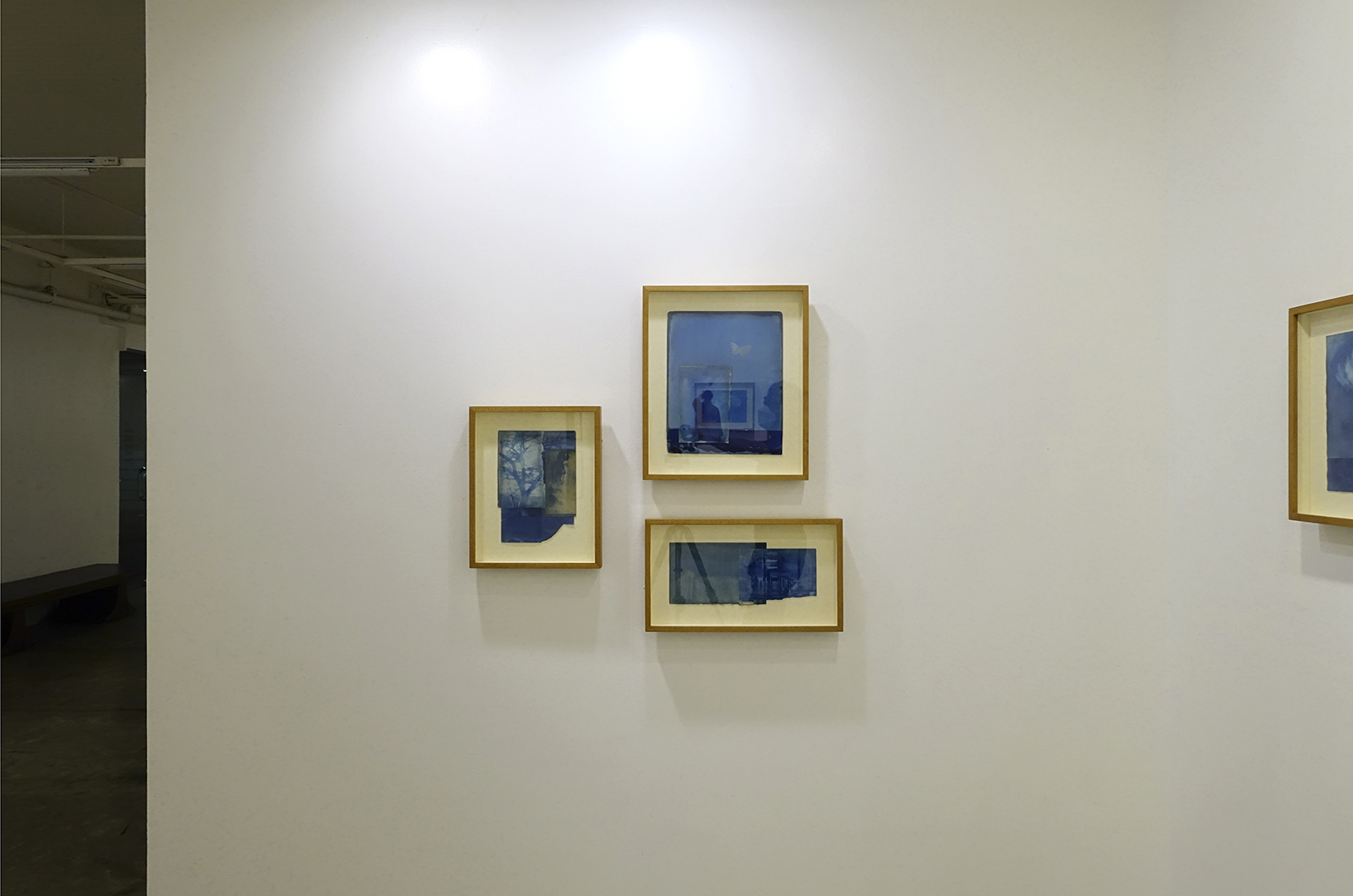 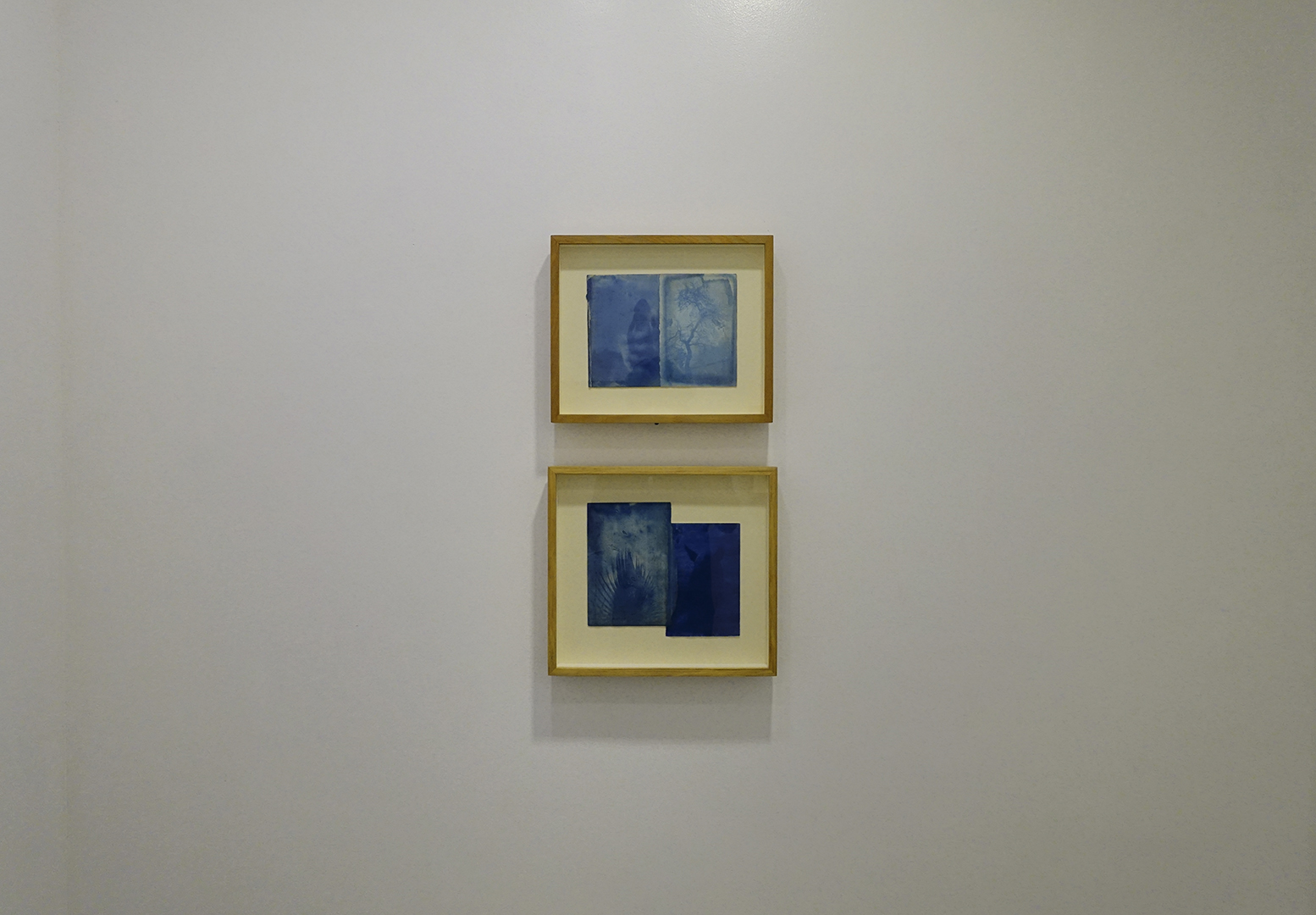 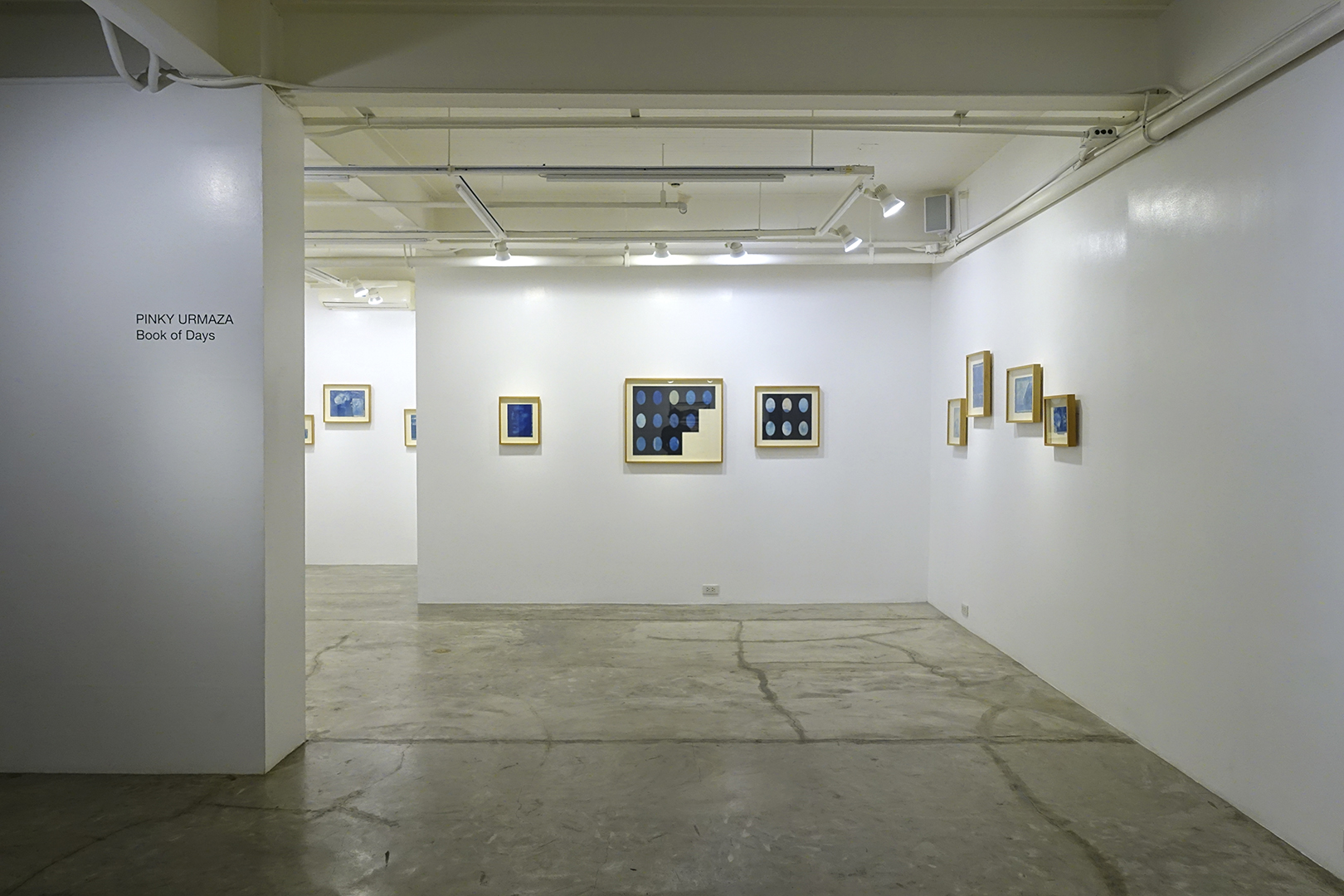 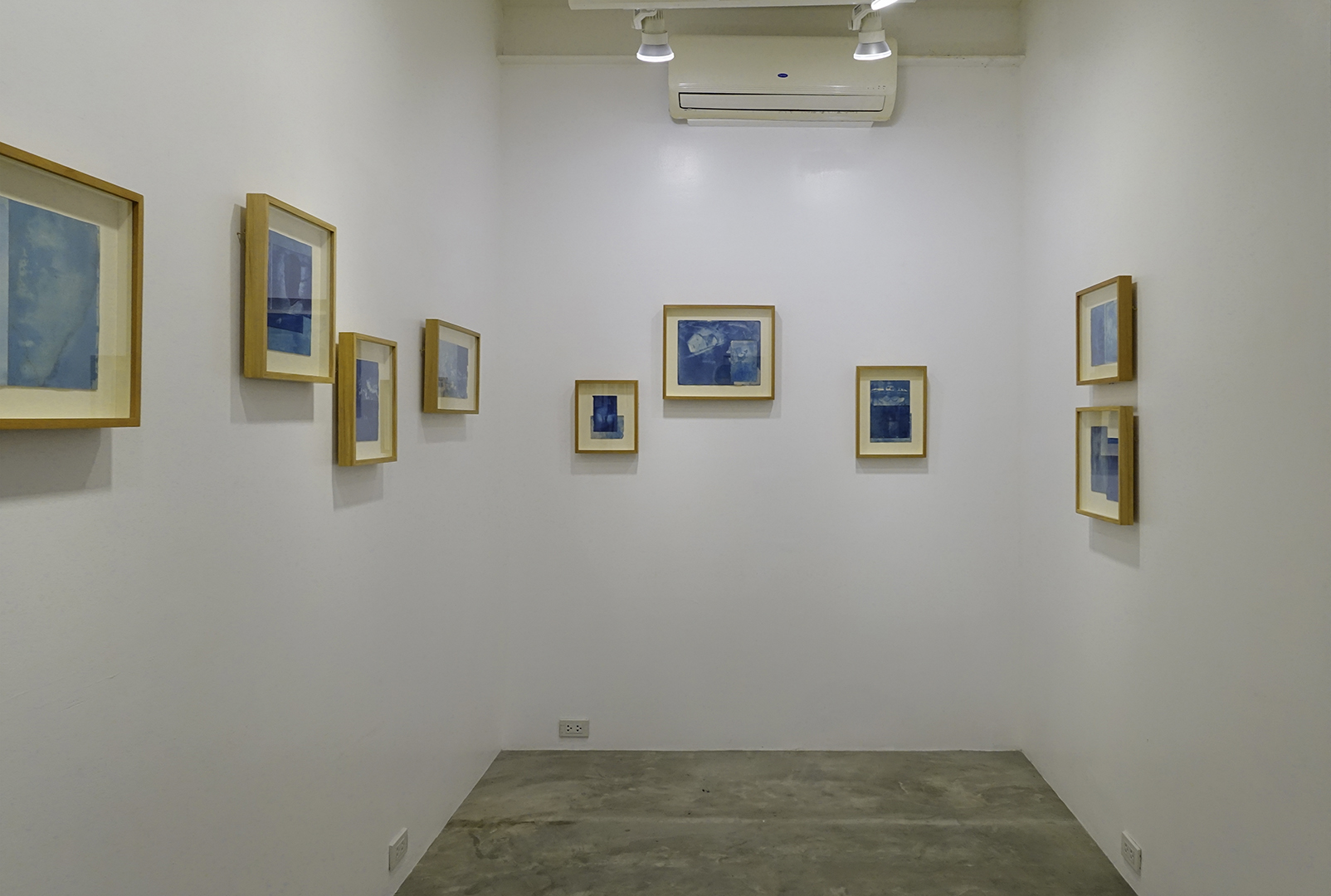