Confined somewhere where everything is at a standstill, Yasmin Sison journeys back into archived research work and uses these materials as the source for new work. Backyard Jungle Redux is a revisitation of old studies and imagery from a previous collection of paintings for Into the Woods, shown in the early aughts, featuring younger versions of her son, Haraya, and her nieces and nephews. Here, Sison invokes Heraclitus: “No man ever steps in the same river twice, for it’s not the same river and he’s not the same man.” The same could be said for her re-entry into the same jungle, as her own self is changed by the very passage of time.

The inability to venture out into the same jungle, based on restrictions, means the loss of the possibility of getting lost, of seeing the world anew. But, instead, this becomes a testament to the long stretch of sleep that Rip van Winkle takes but never feels, waking up to a new world without notice. Unlike Rip, Sison enters a world where she feels the slow trickle of time instead of sleeping through it. She becomes a spectator to the world changing without control or permission.

Although using images from the same group taken at a much different time and place in her life, the paintings in Backyard Jungle Redux are reflections of Sison trying to make sense of what is happening around her. Still invoking Joseph Campbell’s “hero’s journey into the woods,” the paintings are both about “stagnation and flux occurring at the same time.” While all of the figures in her paintings then have grown up and moved on — and, of course, including Sison — they are in some ways preserved in a static state. “Here we all are stuck in the woods,” she writes, “isolated physically and socially by the pandemic.”

Carina Evangelista prefaces her notes for Into the Woods with an excerpt from Campbell’s story, The Hero’s Journey: “You enter the forest at the darkest point, where there is no path… quitting the old place, starting your hero journey, following your bliss.” Backyard Jungle Redux locates the same point of entry, but forges a different way. “If there is a path, it is someone else’s path, and you are not on the adventure.”

The space that Sison occupies here provides a contradictory set of emotions, and here, she sits with them, side-by-side, with both movement and stillness, creating a space where she can exist in two places at once. 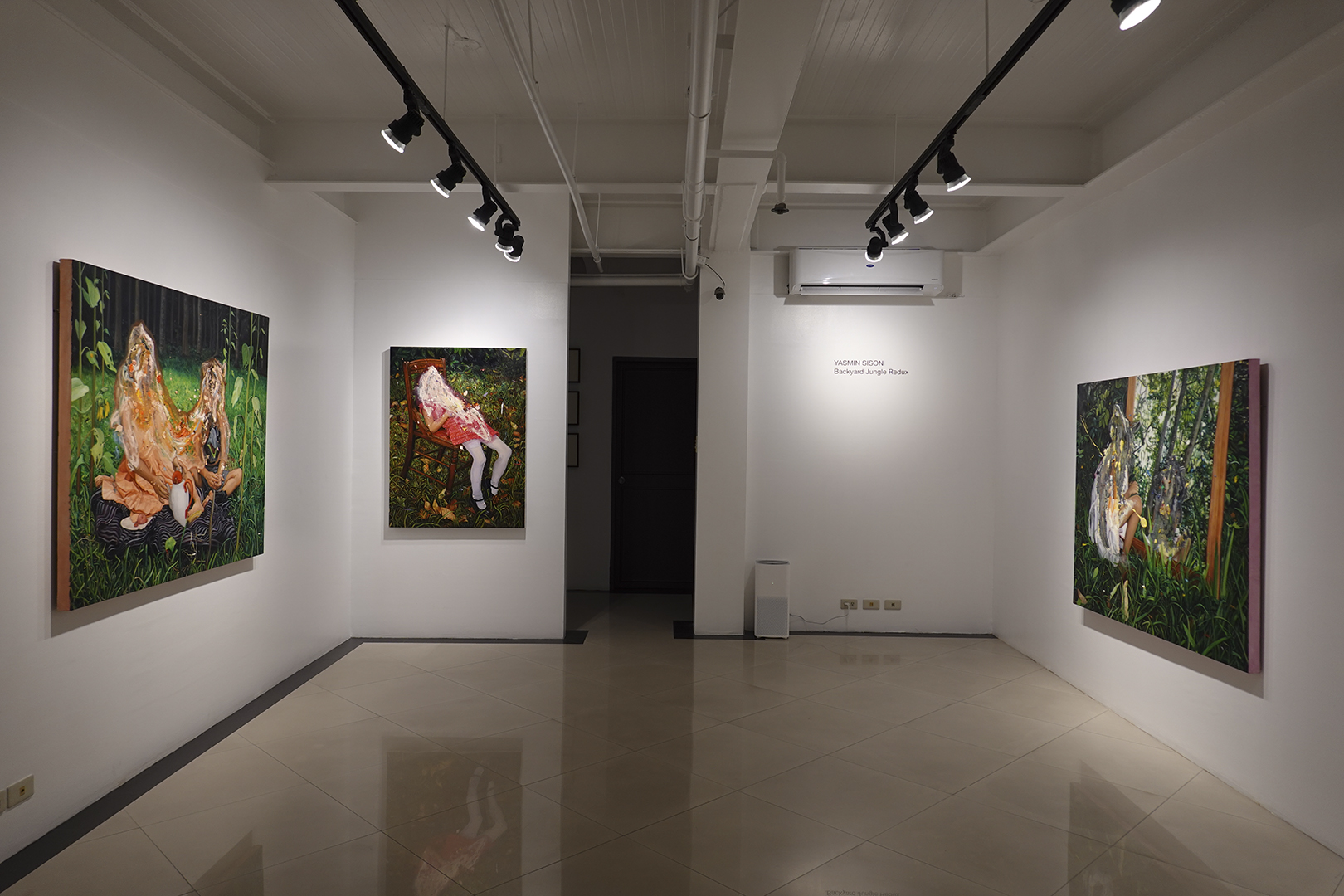 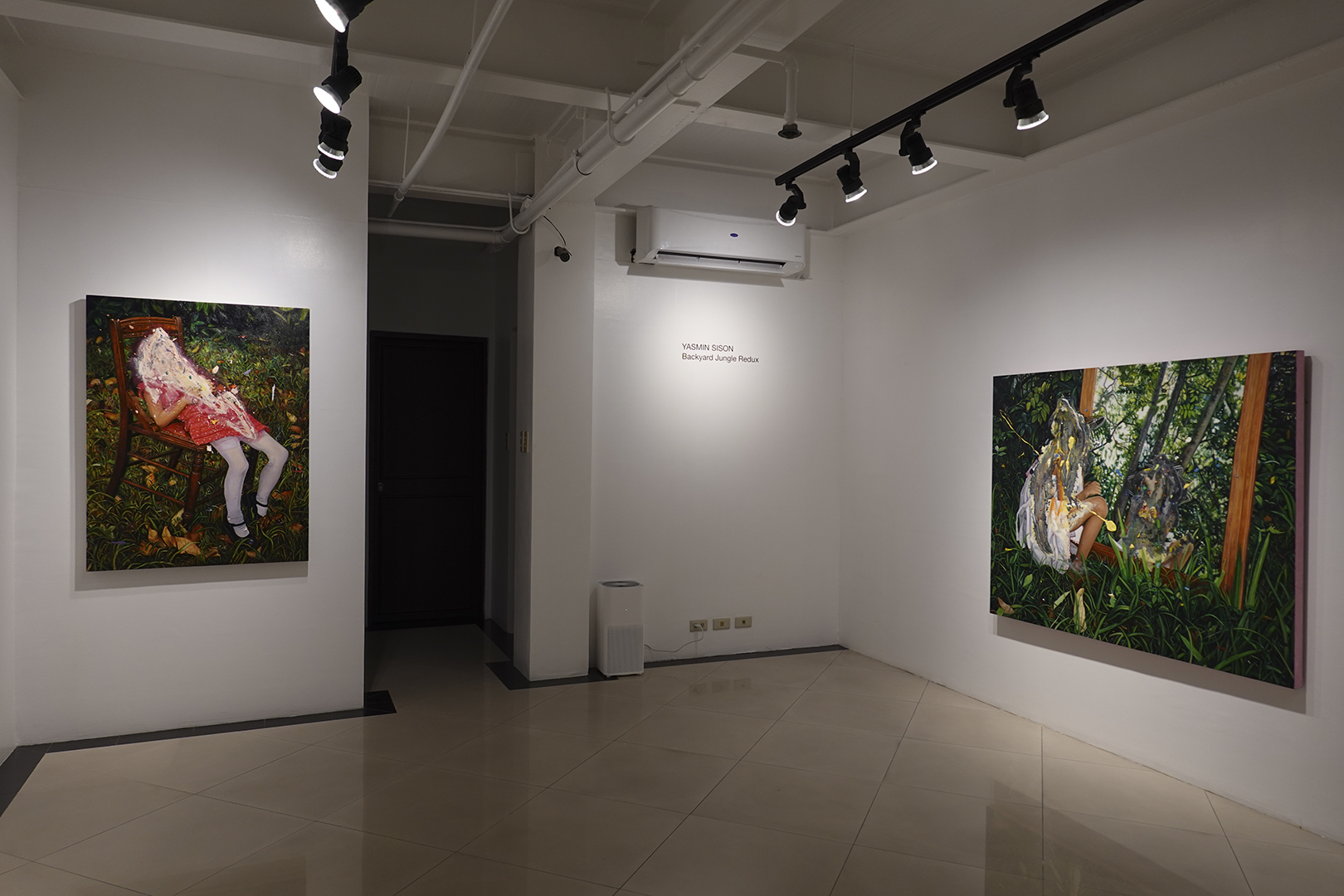 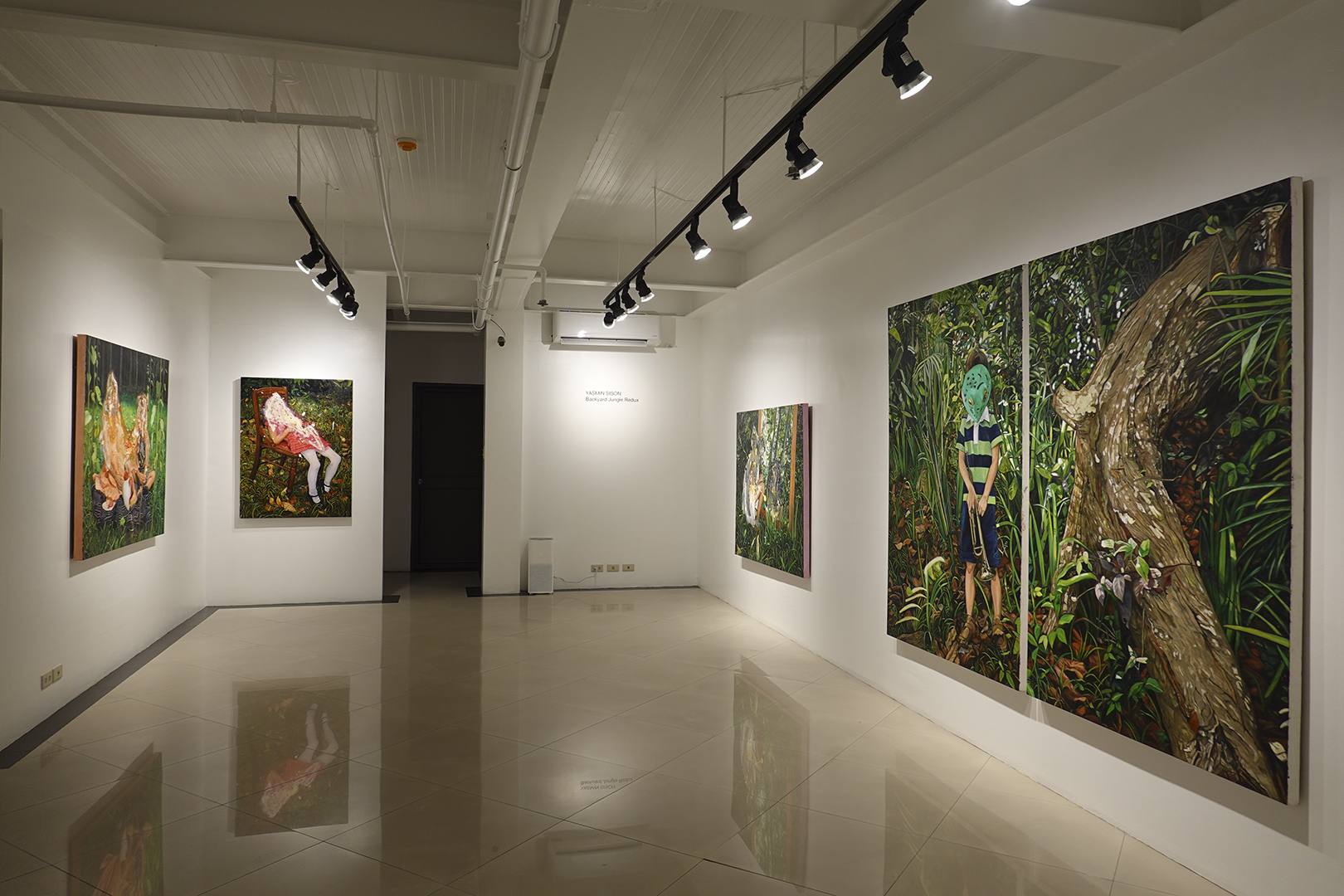 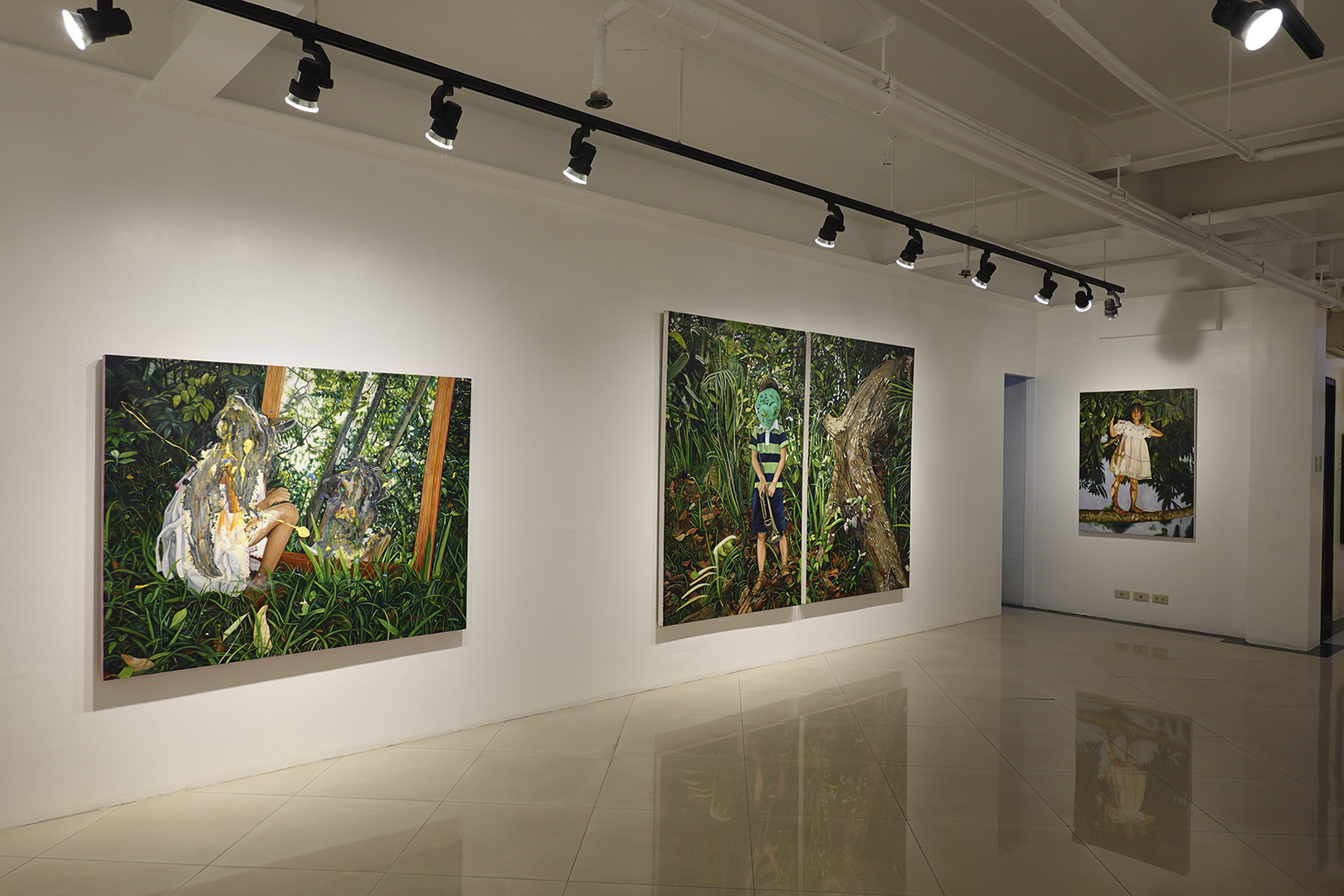 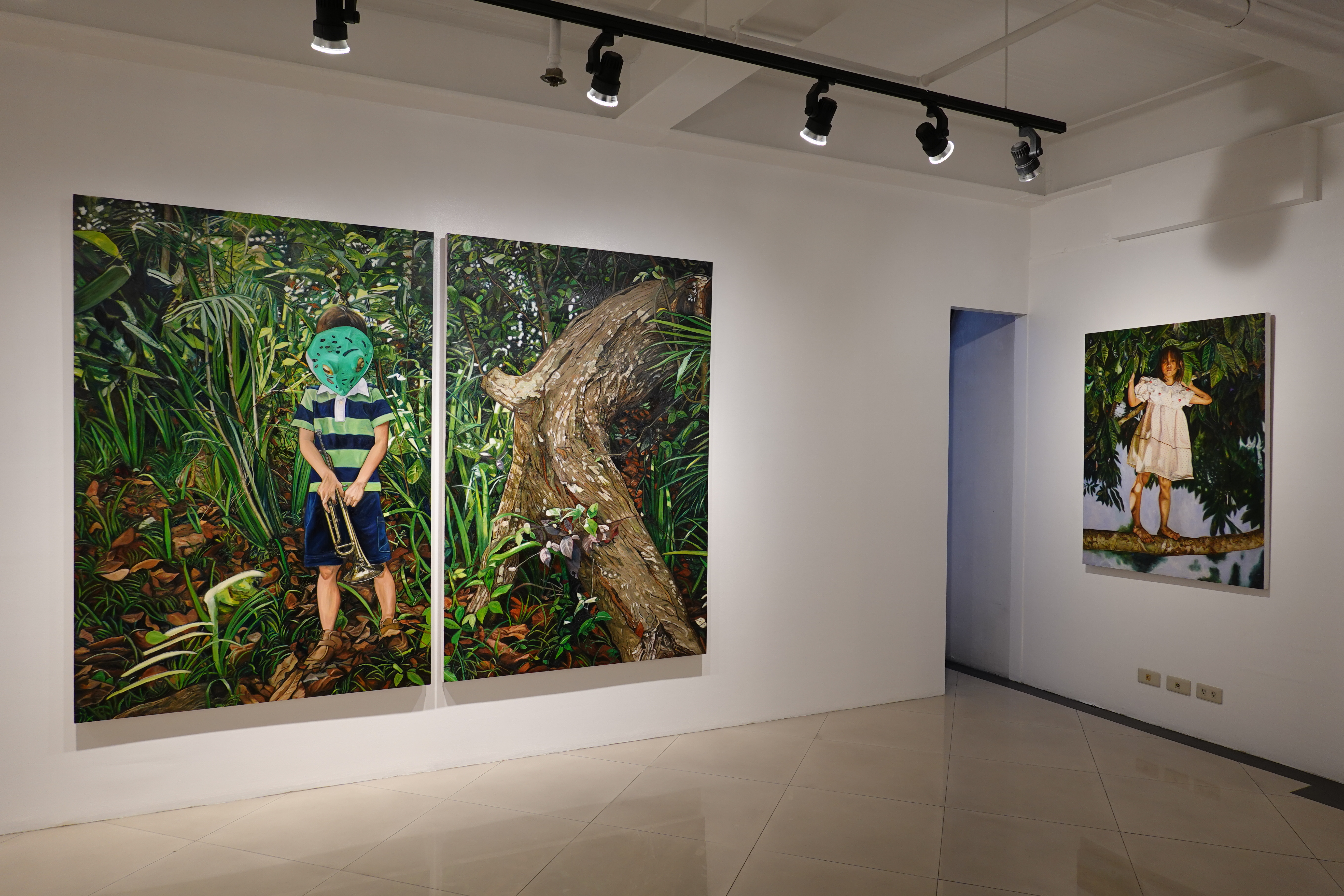 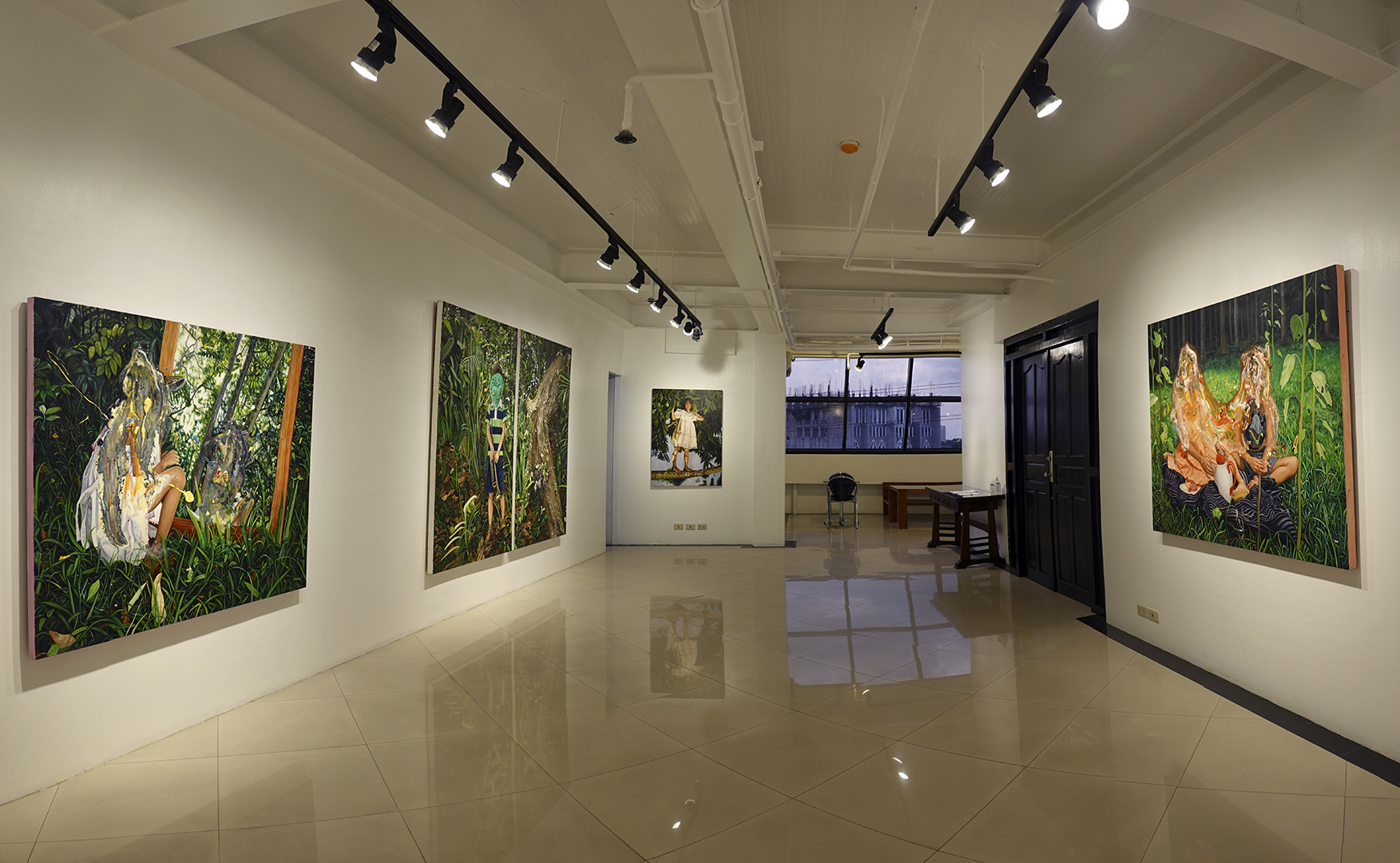 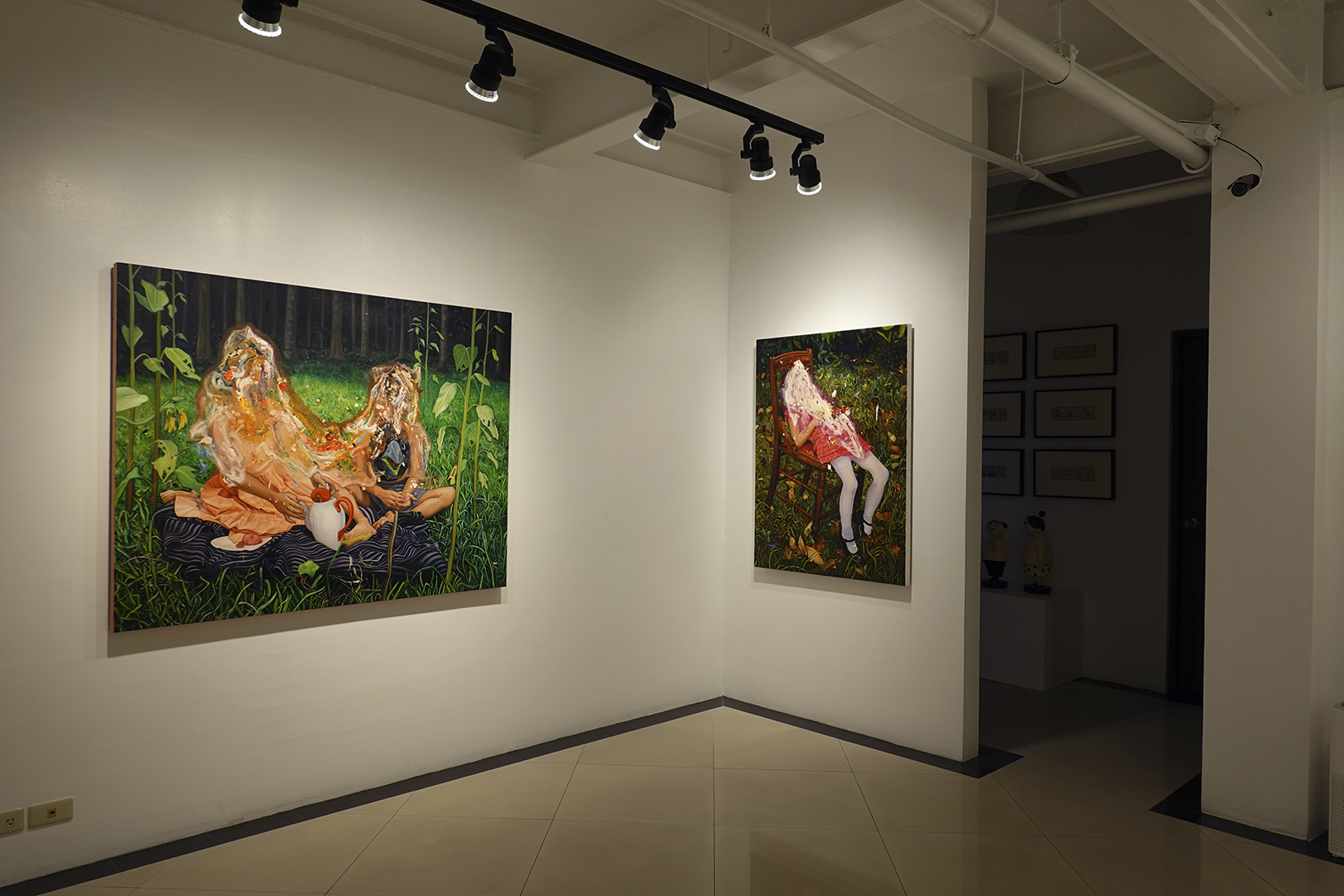 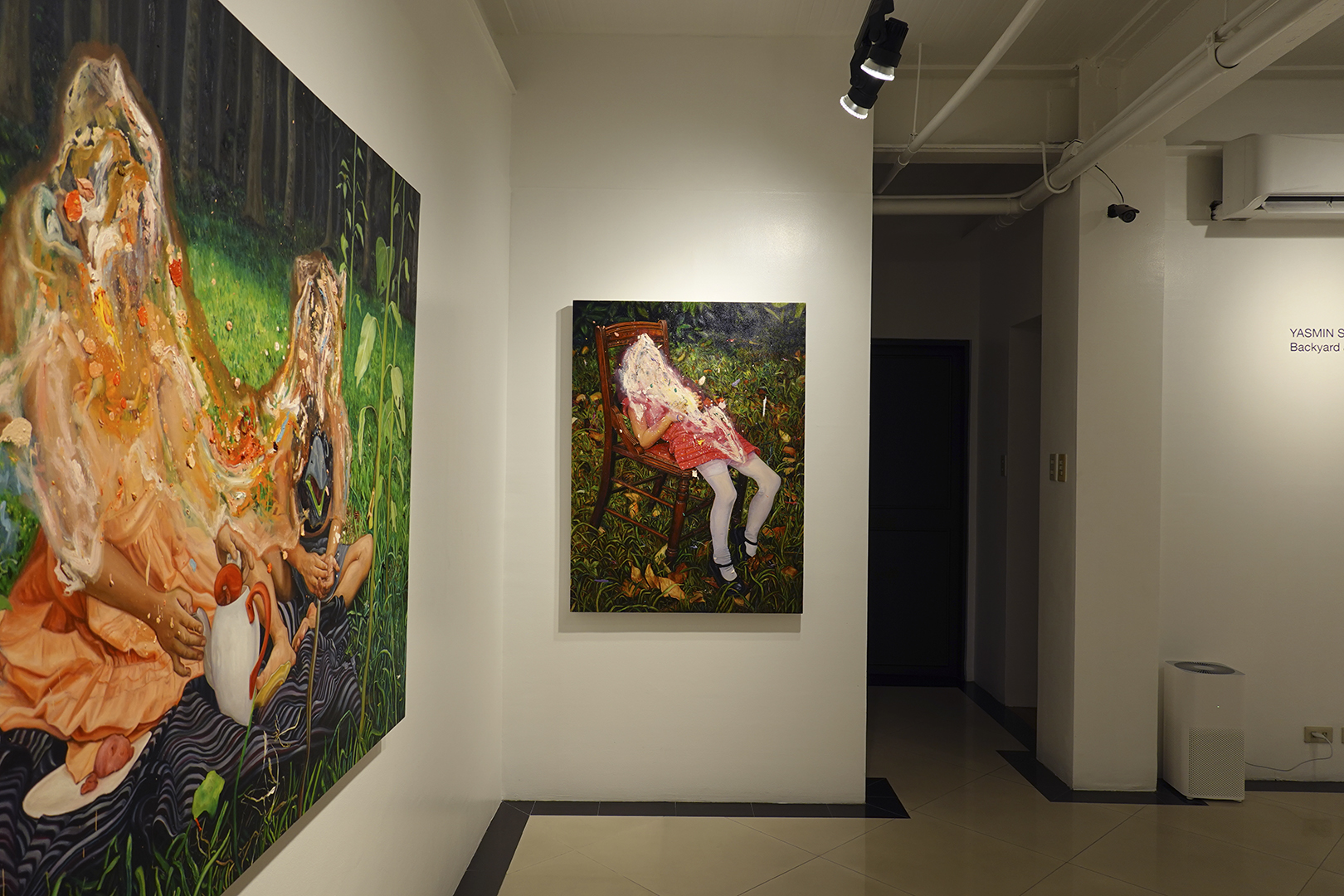 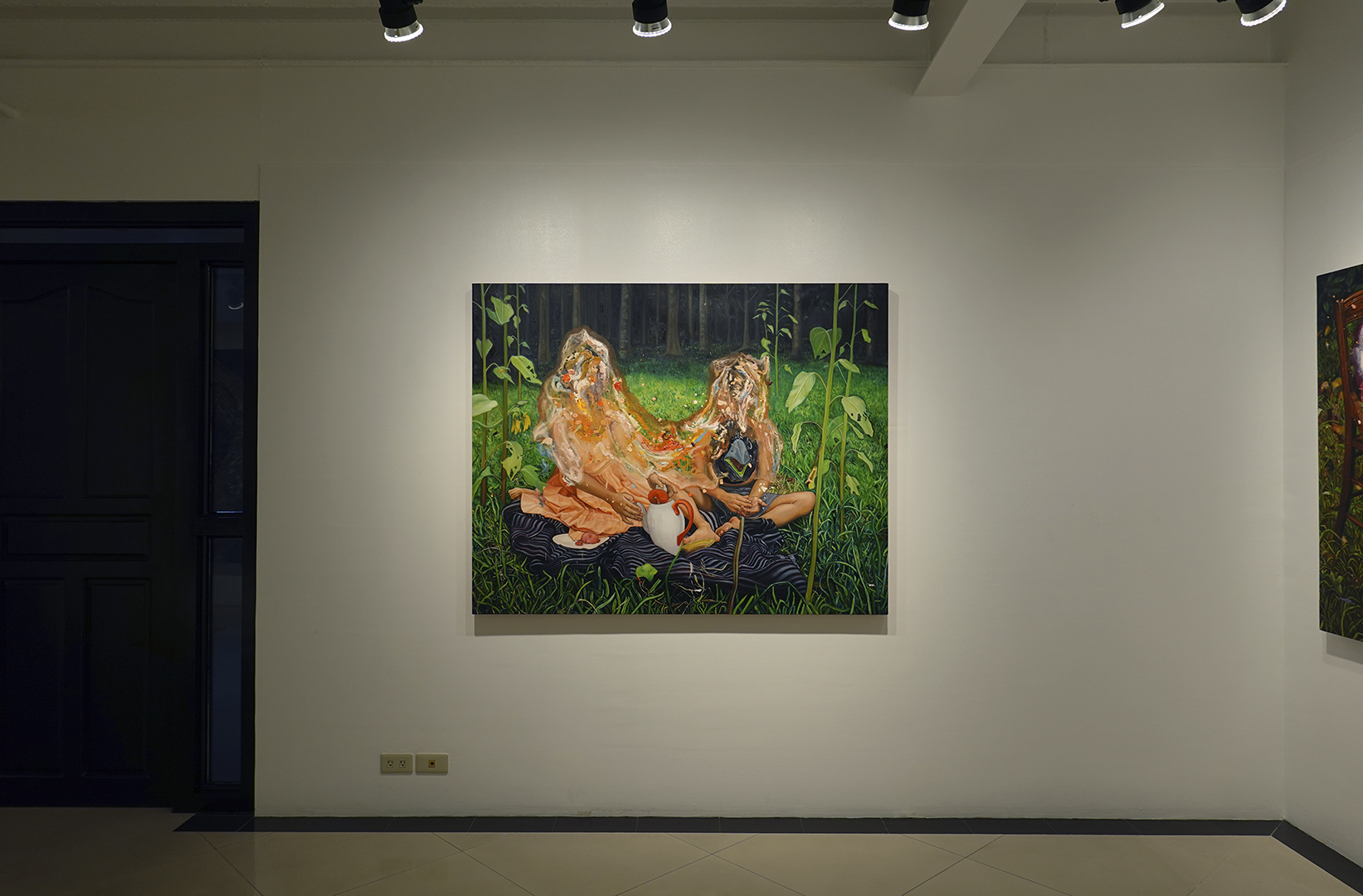 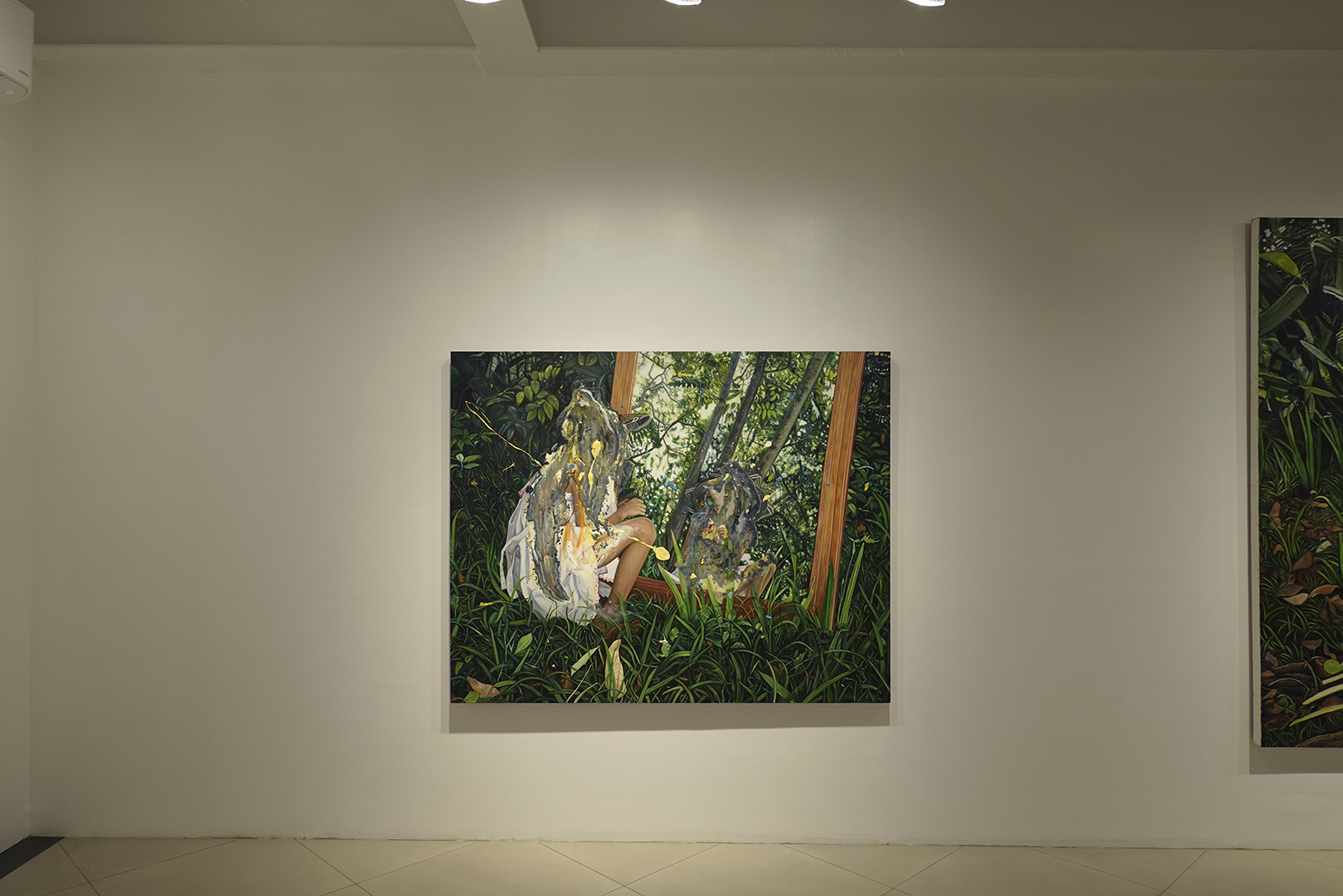 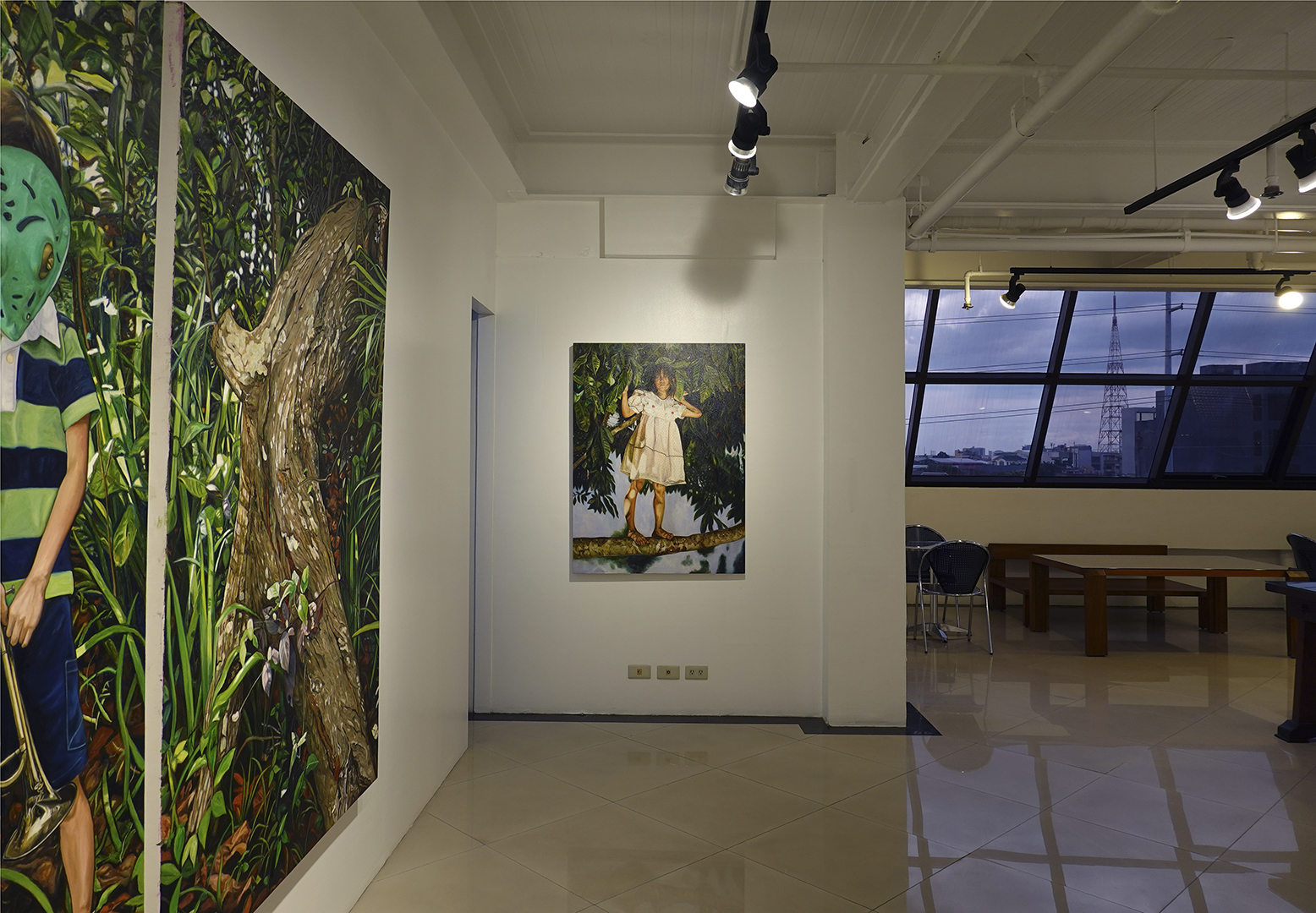 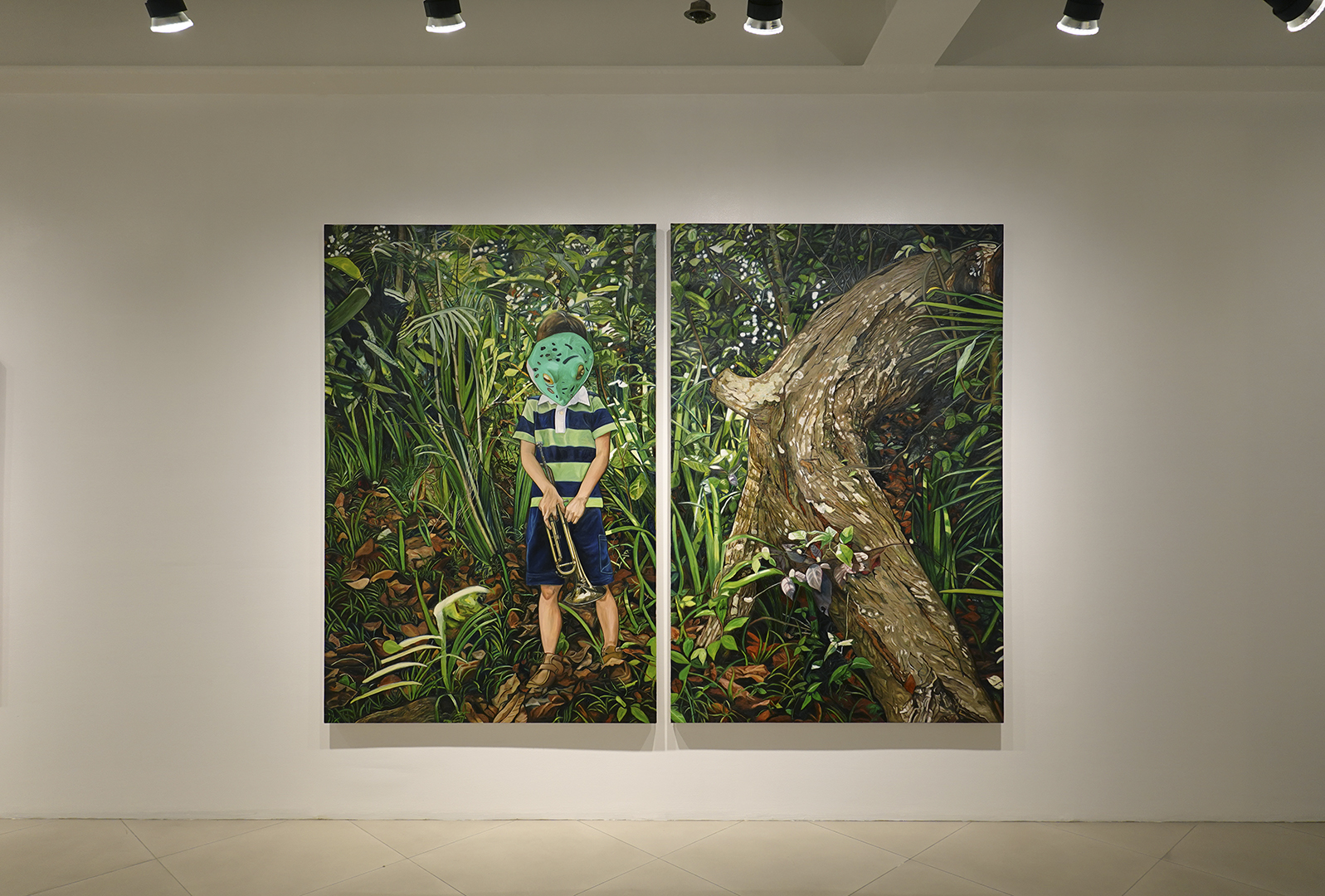 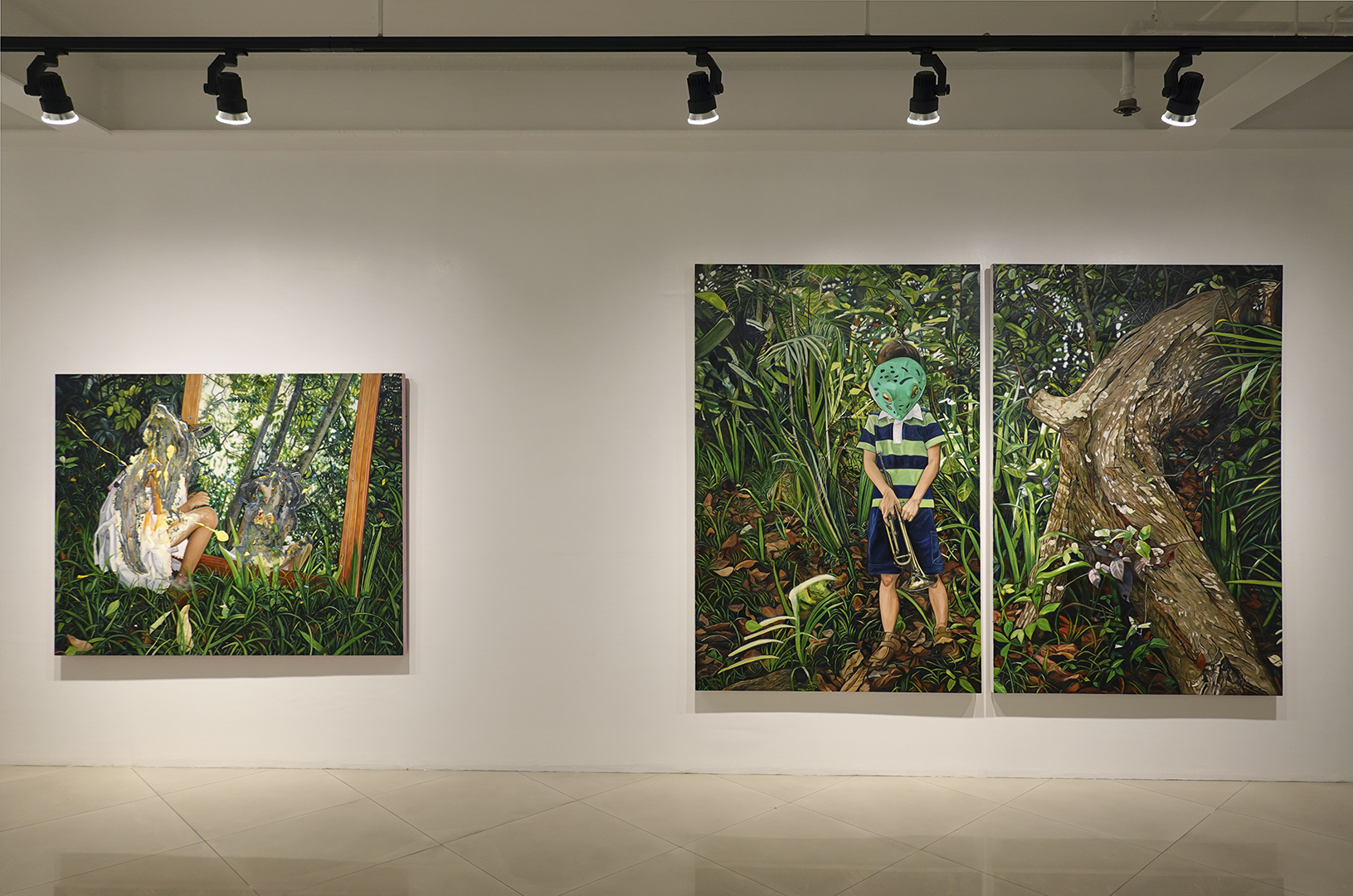