How can one know existence? Within a pluralistic world, Bjorn Calleja paints to seek answers to questions not written in stone. Rather, he breaks dictum by interpreting philosophical theories, wisdom literature, and allegories in art and epic poetry that span from the Middle Ages to the 21st century. In a style that consistently blends the grand and the cheekily small, the works are more than interpretative depictions. Instead, the scenes on the large-scale canvases act like experiments that question, unlearn and relearn schools of thought and art historical movements. He displays what philosophers call hermeneutical generosity — a willingness to enter worlds other than one’s own.

Crowded in one frame, amoebic figures exemplify how in Sartre’s Being and Nothingness, “existence precedes essence”. Their consciousness pulsates, with surfaces expanding from outstretched irises to quivering contours. Another focus hardens into a visual expletive of Nietzsche. The focal subject clutches a brush, a cigarette curling unsmoked. Backed by a landscape with very real dark skies and trees, luminous, featureless specters hover near its crown, dropping hints of existential nihilism.

Besides depictions of recent, slightly-solipsistic philosophies, Calleja’s Paraiso, The Absolutes and Gobbledygook delve into century-old God theories. A fresh recreation of Dante’s boat ferries souls of the damned, balanced by a fleshy tattooed mass. Local calligraphy adds a touch of tropical gothic to the design of the Barque. The miniature humanoid figures distinct to Bjorn’s practice are numerous on the River Styx.

Bjorn shows commitment to mimesis, reproducing an image of the Devil as a black goat from Goya’s Witches’ Sabbath. Not without light and lurid colors, a group relaxes alike Edouard Manet’s pastoral Luncheon. While further in the meadow another group gathers in a circle, this time in joyous reverie after Le Danse by Matisse. Characters of Bosch also spill into the diptych.

Although the intent and meaning have never been confirmed, Bjorn’s reproduction of The Garden of Earthly Delights is faithful to Eden in the first panel, with its elegant blue mountains and Adam and Eve (characters which he has also trademarked into NFTs). While at the center the same hoards of lustful figures convene in rivers and ponds. The last realm is also ablaze in fire and filled with freakish creations. Like the original, a face offers its hollow back for tiny sinners to take both drink and shelter. Another monstrous being simultaneously eats and excretes live beings. Yet Calleja’s individual touches differentiate from the source with his own humanish miniatures, a basketball, and giant roach.

Antonyms of Meanings appear to echo Søren Kierkegaard, one of the artist’s preferred philosophers who asserts irony is paradoxical. Either a “pure” object of thought or a “position”, these paintings reference the world in paradox, moving from existential angst, nihilism and nothingness, to chaos superfluous with metaphor, meanings and religious faiths. Calleja possesses concepts of God that harken back and move forward through different phases of beliefs, picking up something from everything. Conveyed through his inter-disciplinary traditional and virtual practices, while exposed to possibly infinite schools of thought as a former educator, Calleja creates a flexible discourse that instead of simply agreeing, mixes contemporary styles with archaic literature to explore the essence of being. While definitions can constrain us, these paintings ask free-thinking questions that attempt to unveil the layers of fabric in the world. Like a thought experiment where viewers are invited to both contemplate and play, Calleja questions through visions possessing an implicit art of understanding, all the while asking, how does one imagine existence? 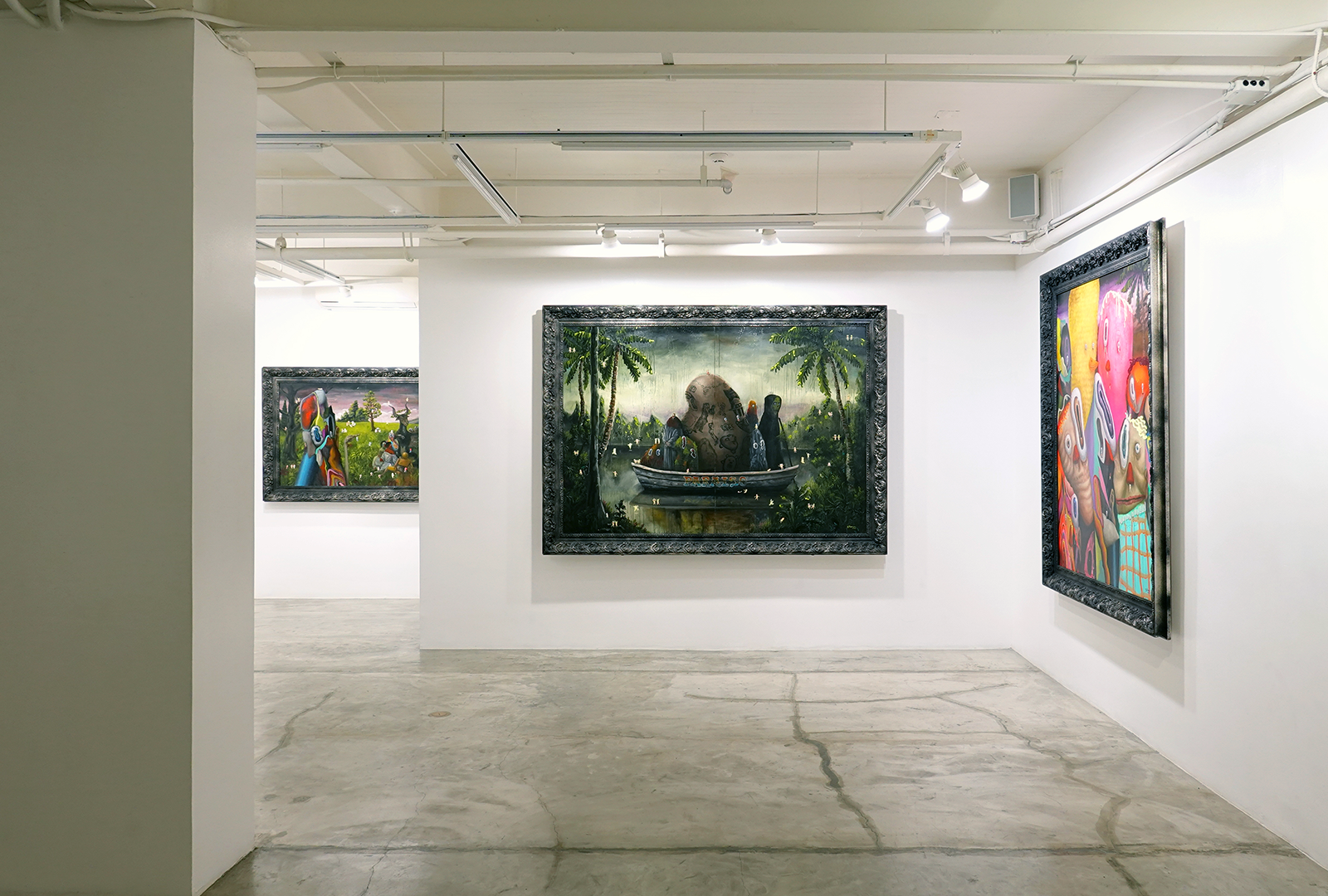 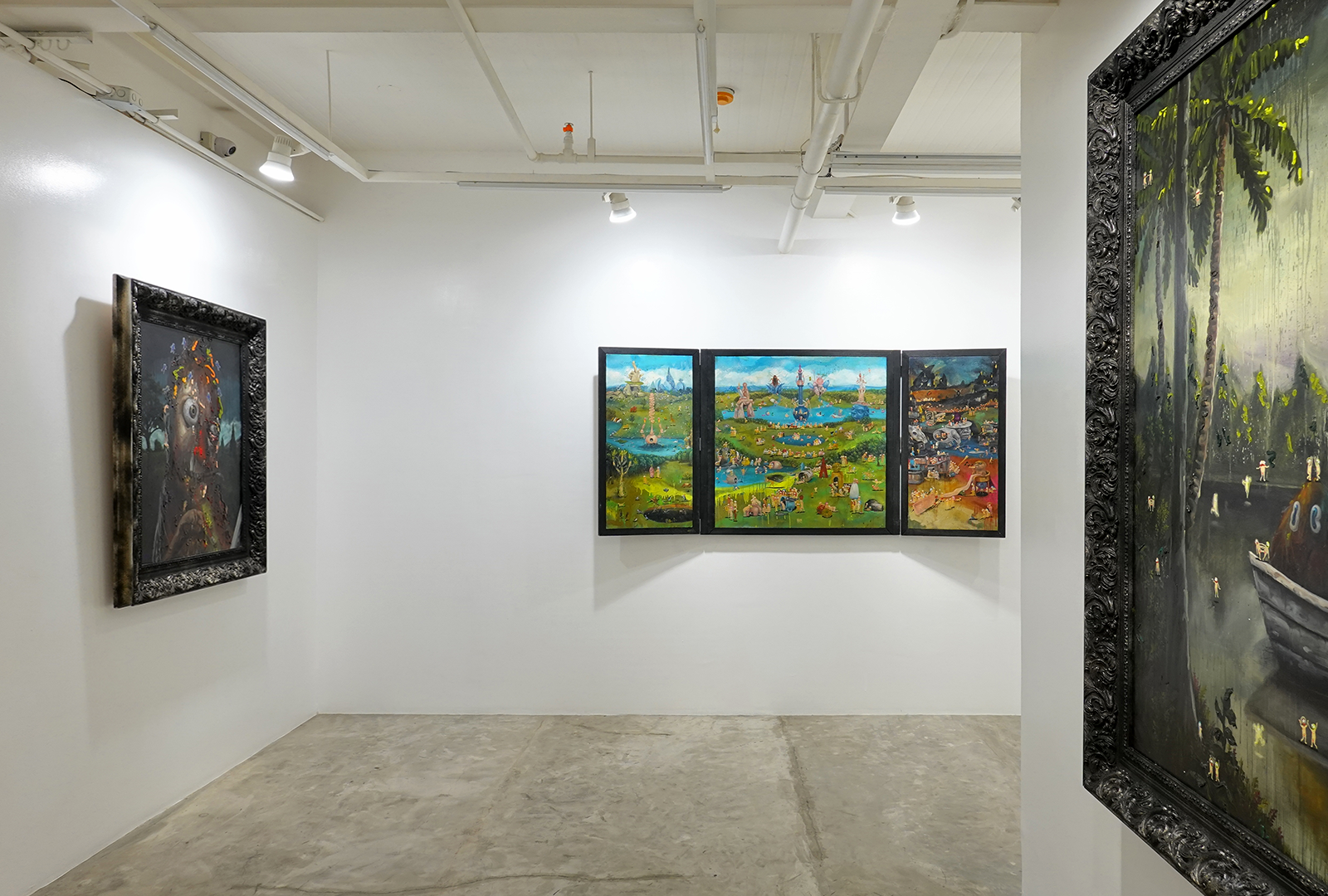 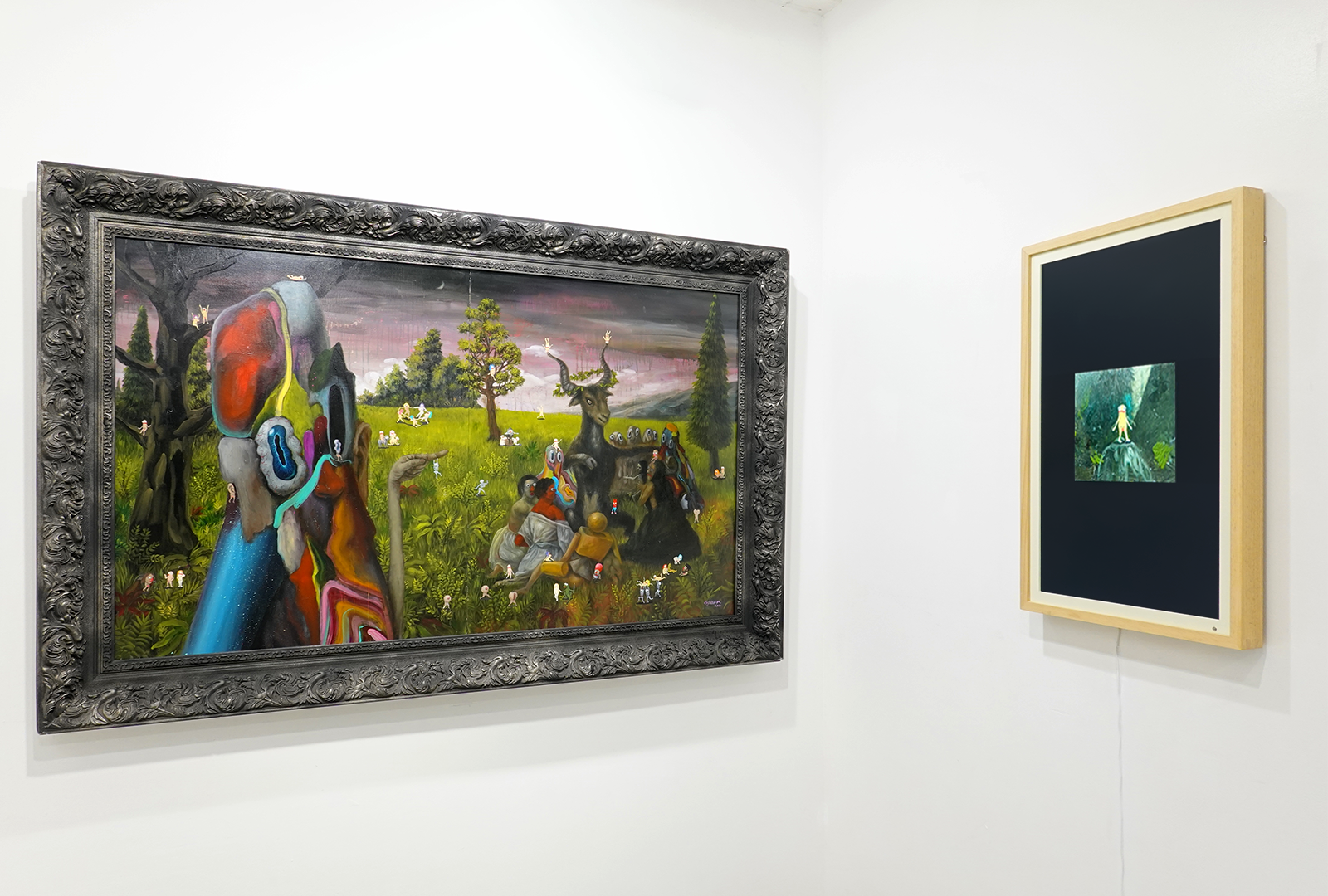 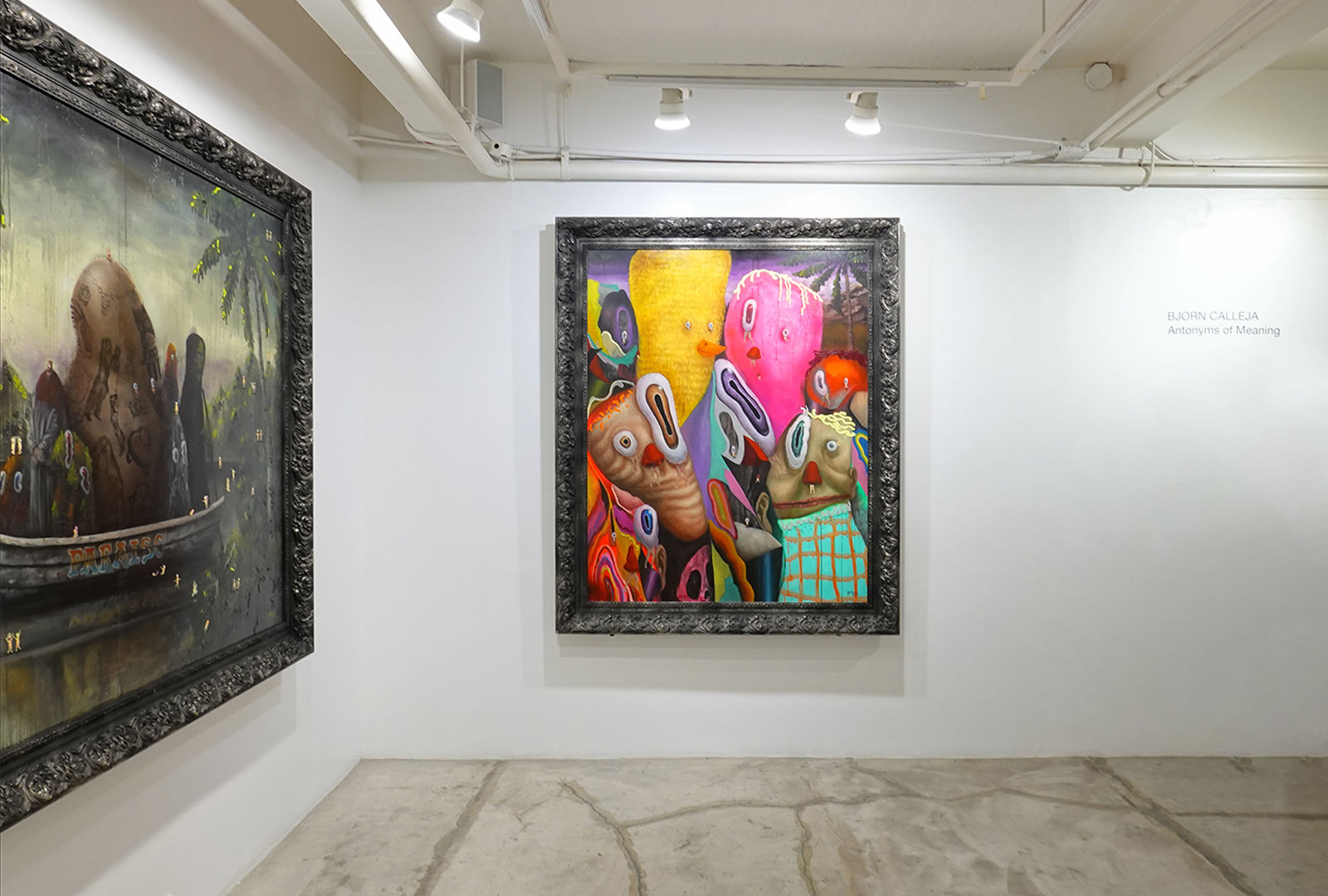 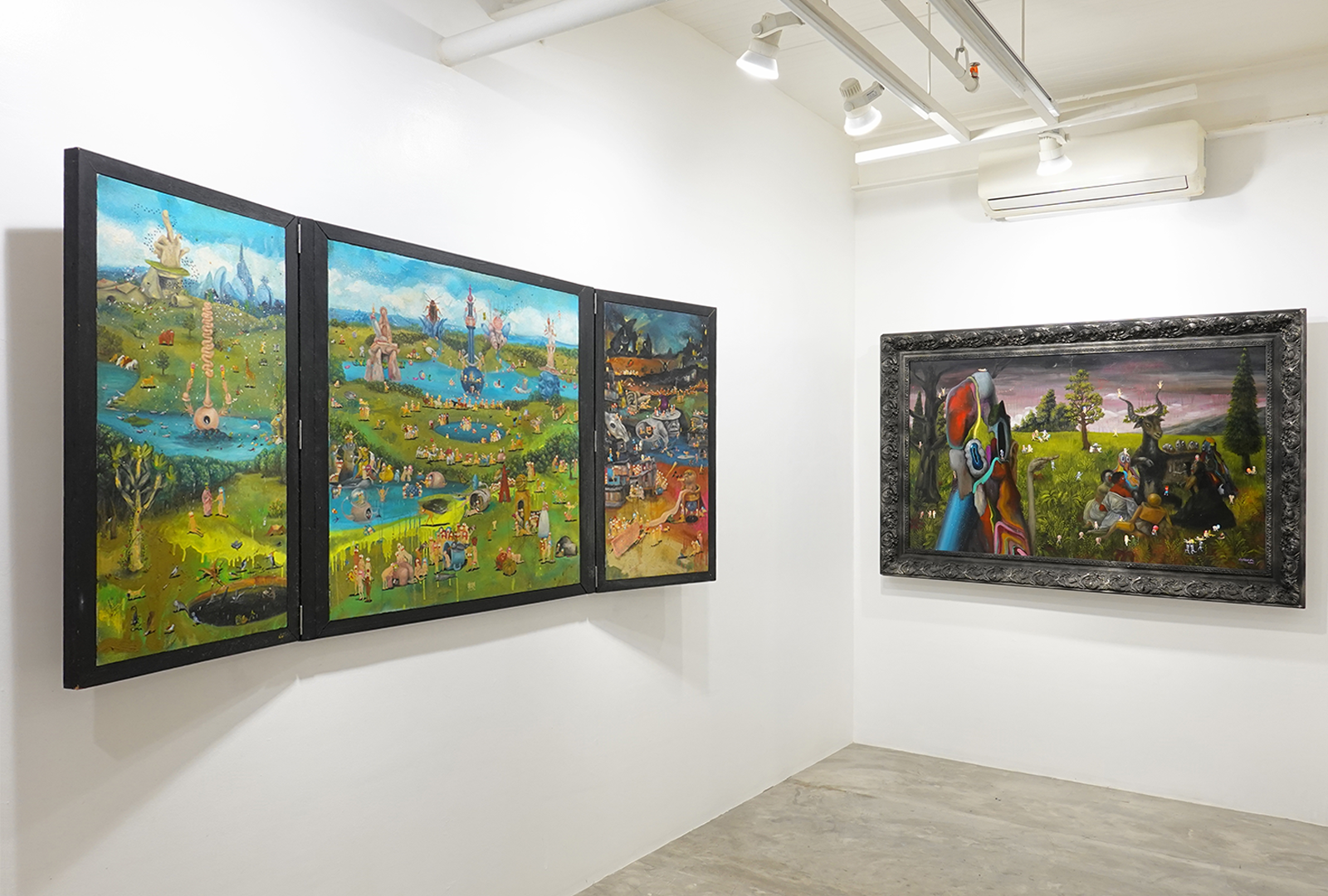 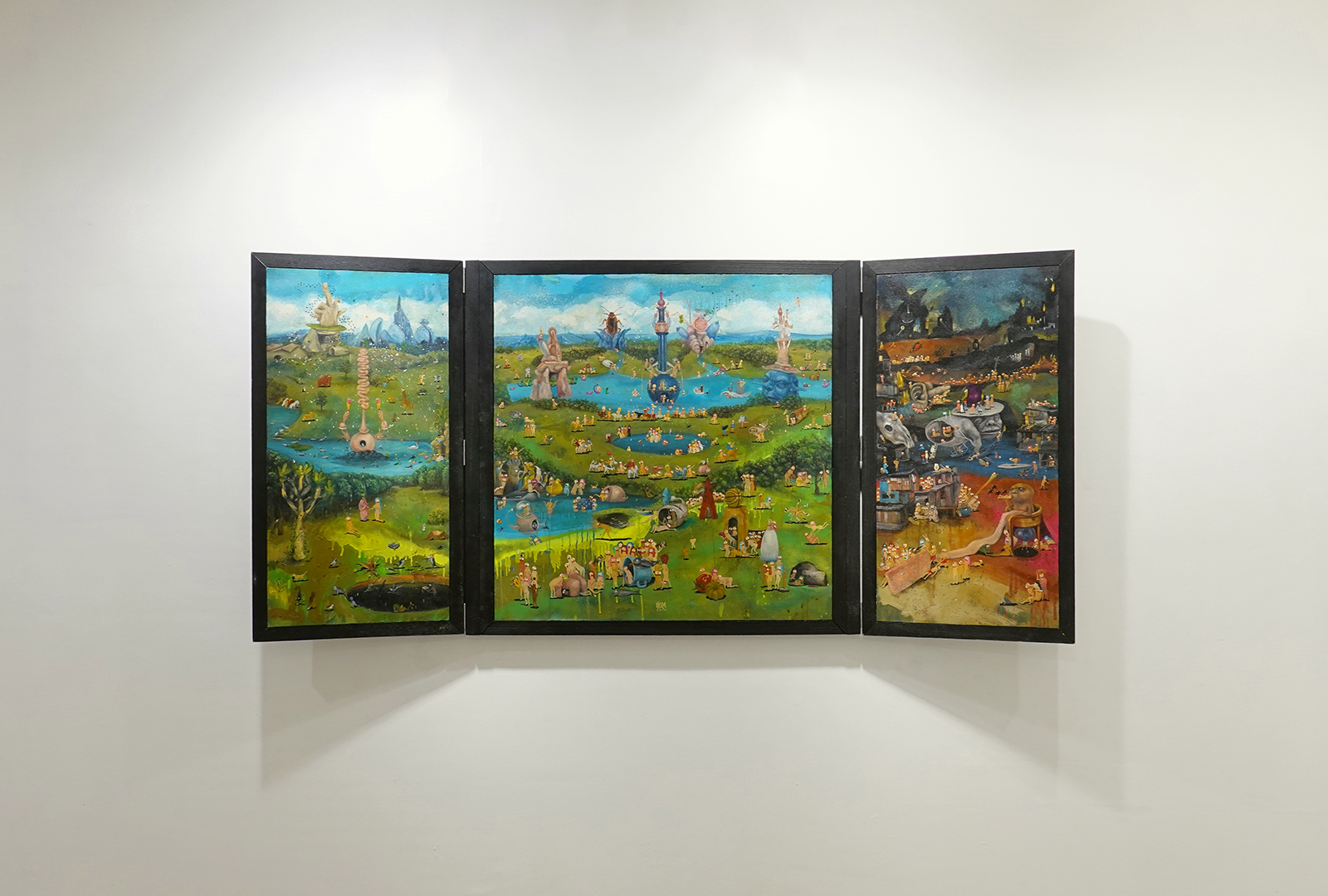 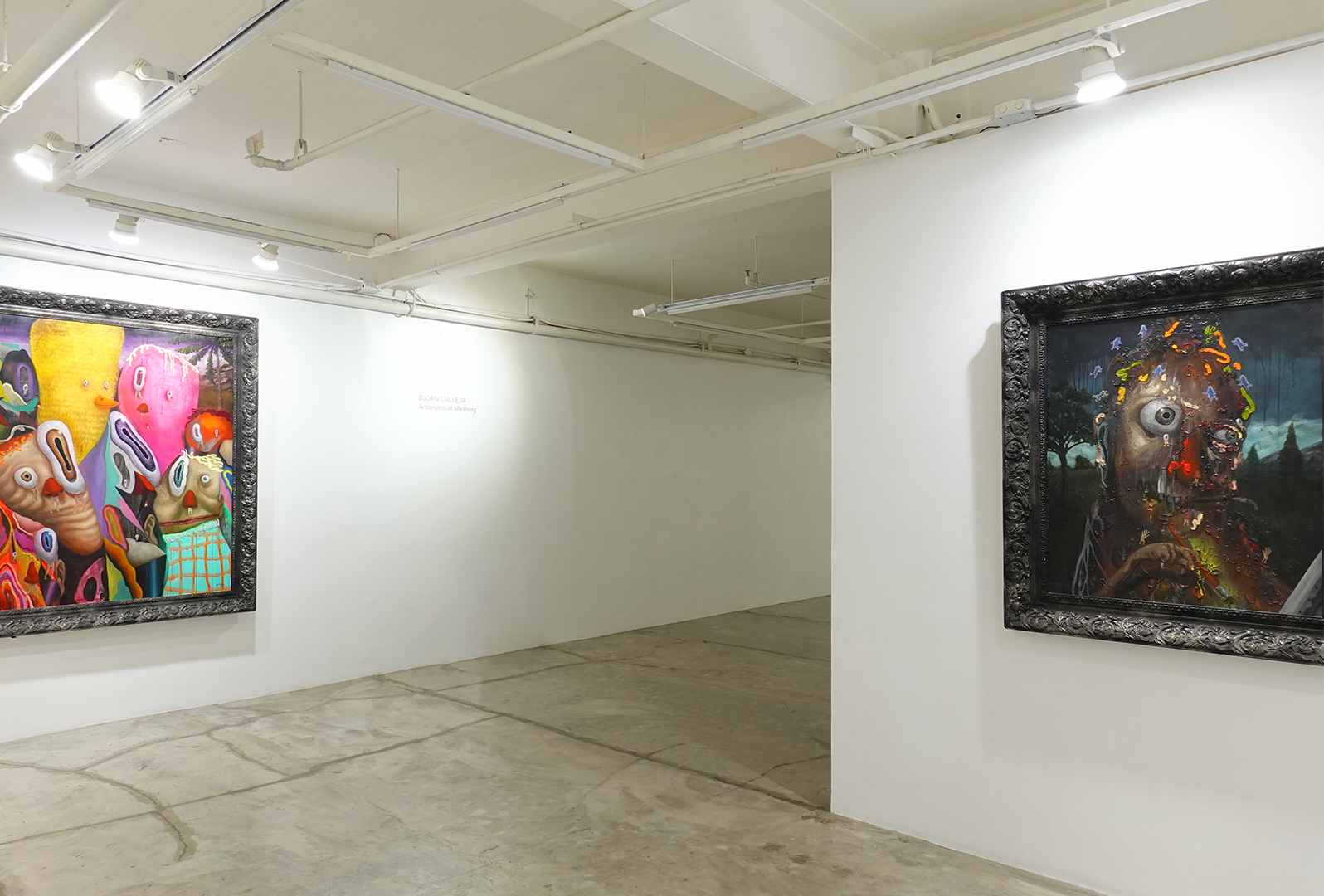 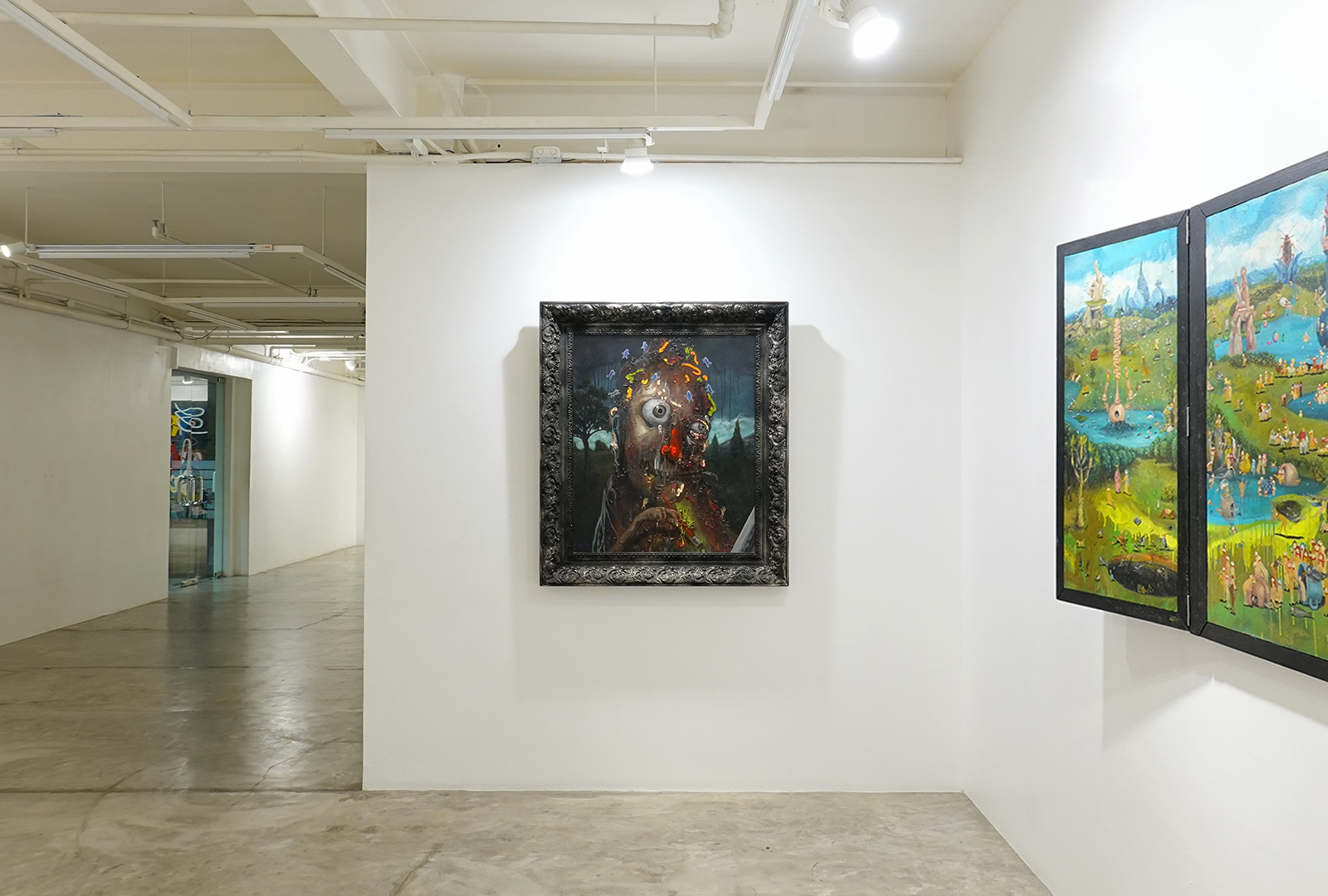 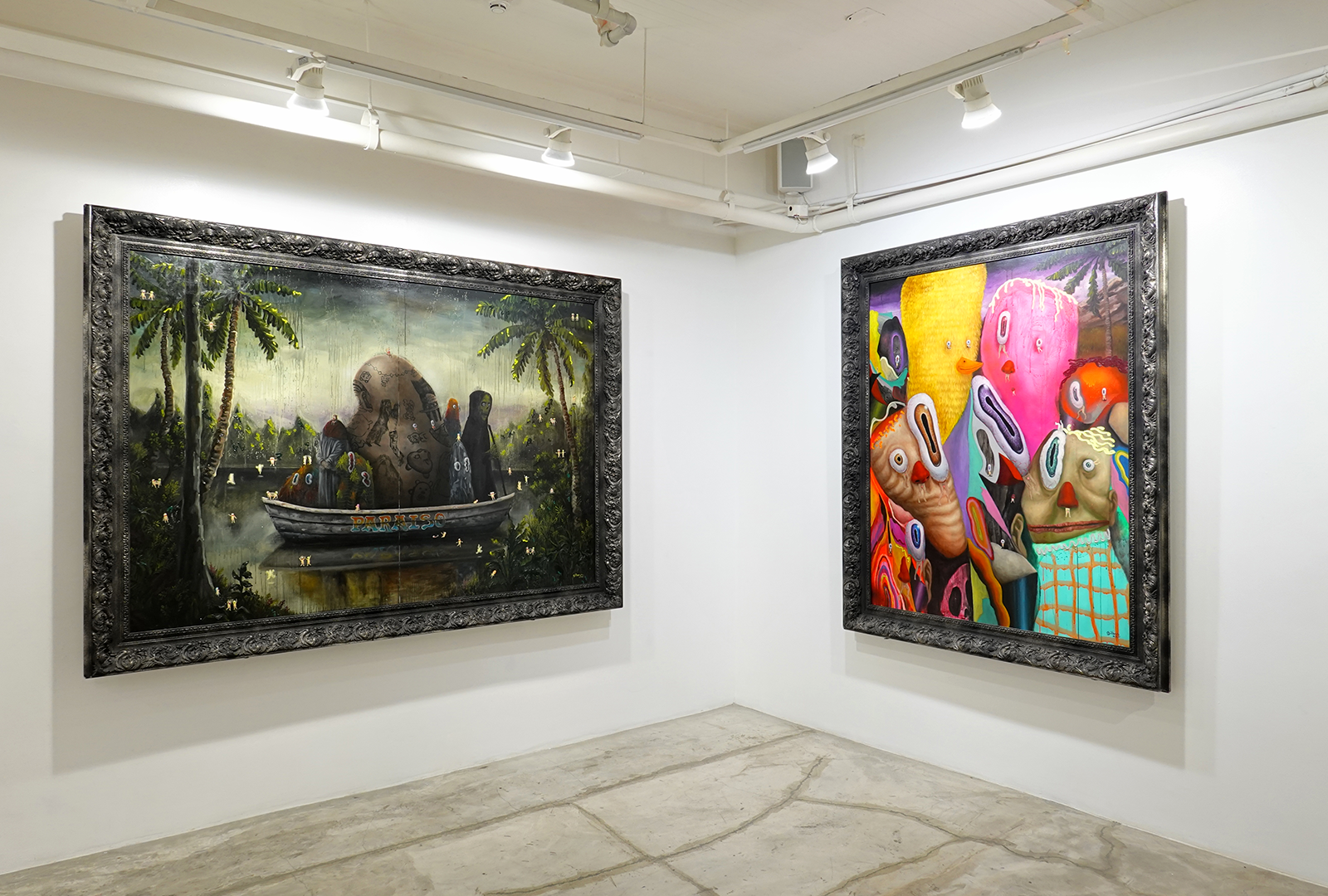